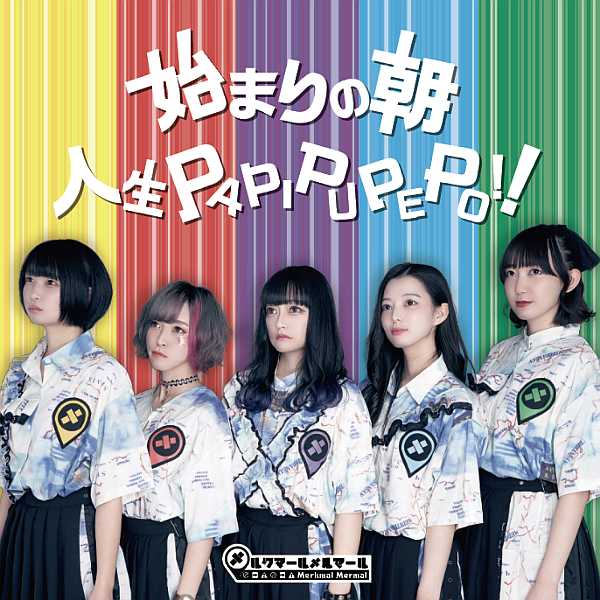 My thoughts on “Hajimari no asa / Jinsei PAPIPUPEPO!!”, the debut single from Merkmal Mermal.

I’m sure I’ve probably said this before at some point, but it really does only take one thing to catch my attention about a particular musical group, artist, release, video, etc and away I go down some rabbit hole of discovery or other. When it comes to Idol it’s usually some gimmick or other but in some cases all it really takes is for a group name to make me stop and go “Huh? They’re called what?” and then they have my attention. What can I say? I’m easily amused I suppose.

Merkmal Mermal are one such group where I saw the name and instantly clicked onto their…Twitter I believe it was. They’re a 7 member group (though this release came out when they only had 5) active in Tokyo, having made their debut only back in January. So another pretty fresh act that’s looking to establish themselves in a scene that is still thriving against all of the odds. In case anyone was wondering by the way, I believe their name means “Mermaid Features” but please do not quote me on that. Peer review that particular bit of research please.

“Hajimari no asa / Jinsei PAPIPUPEPO!!” is the group’s first single, having originally been released as a “venue only” distribution back in March. It eventually made its way onto the usual streaming sites a couple of months later and now here we are. They bill their music and performances as “Kyakkoi” or “Catchy Cool”, not a term I’ve ever heard before but I’m certainly intrigued to find out exactly what they mean by that. Not really sure what I’m going to get here as I’ve basically done the digital equivalent of picking a release up based solely on it having a cool cover, so let’s crack on and find out shall we?

A bright piano instrumental opens the single’s lead track, accompanied by a rather catchy synthesizer melody in a sort of modern meets traditional mash-up I suppose. It’s quite pleasant if not a little bit painting by numbers but hey, nothing wrong with going with something you know works. We get a couple of lines of vocals fairly early, in a kind of melodic Ballad-y style and it would appear that the track is shaping up to head somewhere along those sorts of lines. Well, that’s until guitars and a drumbeat are introduced and the song transforms into a Piano Rock piece that’s full of energy, and some pretty interesting melodies courtesy of the former might I add. The vocals in the verses kinda keep doing their own thing however, which I can appreciate because the melodic style they’re sung in definitely fits with everything going on around them and especially when they tone the instrumental down a bit too. That said, I really wouldn’t have minded a little bit more energy at times. They kinda get there with the chorus but the instrumental does feel a little flat during these parts, outside of the piercing piano melody at least. I did quite enjoy the closing stretch of the track though, there’s some really nice vocal work going on and the instrumental is also providing some pretty entertaining piano parts to accompany all of that. Pretty enjoyable stuff but I wouldn’t say it really brings anything new to the table.

If like me you thought that the first track on the single could have packed a bit more punch then Merkmal Mermal appear to be trying to cater to us with second track “Jinsei PAPIPUPEPO!!”. Punchy Rock riffs open the track, which was a bit of a surprise to me, before being joined by a sort of Dempagumi.inc sounding synthesizer which adds a chaotic but also very catchy dynamic to the composition. The vocals this time around match the energy and intensity of the track a little better, with the opening verses being delivered in a catchy style that’s in time with the punchy beat of the instrumental. They take things down a little in the lead-up to the first chorus and I’m somewhat reminded of Kinoco Hotel at this point for some reason. Anyway, the chorus explodes into life and things get rather colorful and chaotic as the vocals crash together and race along to the increased tempo and intensity of the instrumental. We take a lot of this energy into a breakdown of sorts, which I thought was interesting to place in the middle of the song, and after that the song never really loses any steam as it hurtles relentlessly towards its conclusion. At a little over 3 minutes it’s fairly short by today’s standards but they did a lot with that time, that’s for sure, and by the time the last syllable of the song’s title rings out I didn’t feel like we needed to get anything more out of this than what we did. Super fun, super colorful, would definitely recommend checking it out.

“Hajimari no asa / Jinsei PAPIPUPEPO!!” is pretty good as far as debut releases go. I did have one or two gripes with the lead track but it was certainly a fun listen outside of that. Then the following track took what I didn’t particularly care for and pretty much replaced it with what I would have done, so that was a very unexpected but welcome surprise. Kinda hard to argue with those sorts of results folks.

I would definitely recommend this release if you’re into upbeat, Denpa inspired, Rock music or just want to check out something fun and colorful. I believe that Merkmal Mermal also have a second single which just recently made it onto digital streaming. I would very much like to check it out and see if there are any other aspects to the group’s sound and style that might not have been as apparent on this initial taster. Since it’s now available, you can expect a review to be posted here in due course.

Enjoy the content? Consider supporting the site on Patreon for as little as $1 a month.
GENKINAOTO RECORDSMerkmal Mermalsingle review
0 comment
FacebookTwitterTumblrRedditEmail