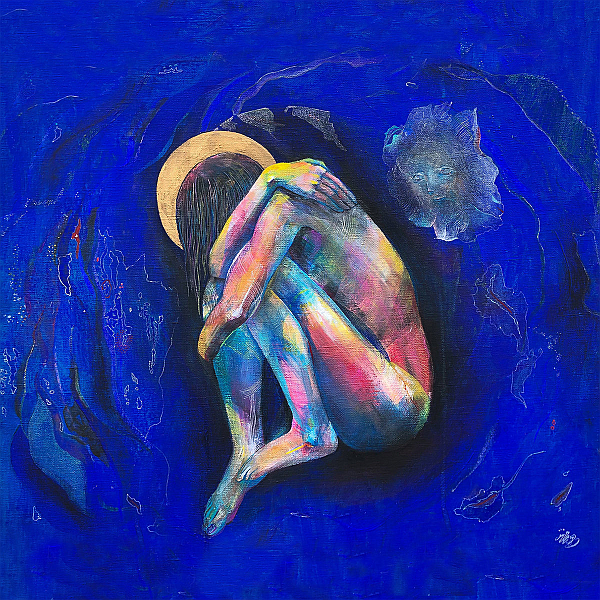 My thoughts on “kyusai”, the debut solo single from Sari.

The Idol world is pretty interesting in that there are just so many twists and turns over time, some that you can see coming from a mile away and others that sneak up on you out of the blue to surprise you. One thing I’ve learned over the years though is that if someone leaves a group/the scene entirely then there’s at least a 50/50 chance that they’ll be back at some point down the road. Though in the case of today’s review, the artist in question never really felt like she’d be gone for long.

Most of you will know Sari from her time in NECRONOMIDOL, a group from which she graduated about…a year and a half ago now? Man, time flies doesn’t it? Anyway, she told me during one of our many buppan talks that her decision was one made in the pursuit of personal growth and hey, you gotta respect that right? After spending the better part of 2019 pursuing other interests such as modelling and art, she eventually made her return to the world of music last September as a soloist.

“kyusai” is Sari’s first official solo single after putting out a couple of venue only demo CD-Rs over the last 8 months or so. I’m not sure if she’s really calling herself an idol anymore these days but she’s still appearing on shows with Idol acts so I’ll go with that for now. We’ve got a couple of tracks to check out here, one of which features a very familiar name Kei Toriki which is pretty cool to see. I doubt this is going to sound very much like the last project that Sari was involved in but I’m excited to see what she does here now that the artistic vision is all her own. Right enough chat, I’m getting impatient so let’s check these tracks out.

Leading track “mawaru” hits us with something completely new right off the bat. Given Sari’s past work I’m not sure many people would have expected her to have a mellow, Chill-Hop sort of vibe in her but this song (produced by composer and pixel artist Soejima Takuma) definitely shows that she does. Repeating xylophone samples paired with subtle piano and a nice rich beat make up the bulk of the song’s opening instrumental, and indeed much of the entire song as they slowly start coming more and more alive as things progress. Pretty chilled out stuff but with plenty of subtle nuances to keep the ears and the mind engaged when trying to pick all of them out. We also get to hear a softer side to Sari’s vocals on this track, with the song receiving a shot of warmth and richness when they first take the stage. A far cry from the haunting high notes of her NECRONOMIDOL days but by no means any less beautiful or melodic as they drift along, weaving their way around the chorus and into your ears. Very repetitive by design but that’s usually the case with this style of music, opting for atmosphere and tone over structural complexity. Not sure how this one will sit with the Heavy Metal contingent of Sari’s fanbase but if you’re looking for something nice and mellow to chill to then she’s got you covered here.

Title track “kyusai” didn’t end up getting top billing on this release, which is something I always find interesting to note. Anyway, this song is going to sound a little more familiar to people coming over from the NECRONOMIDOL camp, and that’s in large part due to it being composed by Kei Toriki of “pyschopomp”, “END OF DAYS” and “thanatogenesis” fame. The track takes on a much darker atmosphere with a dense, steady drumbeat providing the tempo for the more subtle guitar riffs to ring out into the song’s background ambience. There’s a bit of chatter going on too but I can’t make anything out of it unfortunately. Those looking for a more NECRONOMIDOL-esque vocal performance have come to the right place, with Sari providing yet another hauntingly beautiful delivery of her lines. She doesn’t push the top end of her vocal range too much here but I kinda prefer the lyrics to have a bit more of the body to them that a lower, more natural tone provides. Things do slowly build up as the song sets off on its journey with us and things definitely sound a good bit brighter and the vocals much more powerful by the time we drop the curtain at the end. Sari and Kei Toriki are certainly a winning combination as this track shows, it’s a shame then that he’s hanging up his work for hire boots as of a month or two ago.

As far as solo debuts go, “kyusai” is about as perfect as you’re going to get. Though given that Sari is a bit of a perfectionist and very particular about things then perhaps that was to be expected. We got to hear something new from her in “mawaru” and she also gave us a callback to her roots with “kyusai” with both tracks being highly enjoyable and great showcases of different aspects of both her singing ability as well as her personality.

I’m really glad that Sari decided to come back to making music and the results speak for themselves. I believe that she’s also currently working on a new CD too so hopefully it won’t be too long until that sees the light of day, though given the current global situation you never know. Where will she go from here? I don’t know, ask her yourself. After years of green hair and white facepaint it seems like Sari is finally getting the chance to spread her wings a little and I for one couldn’t be happier for her.

Enjoy the content? Consider supporting the site on Patreon for as little as $1 a month.
indieSarisingle review
0 comment
FacebookTwitterTumblrRedditEmail

[Review] miscast – Midnight Through the Night