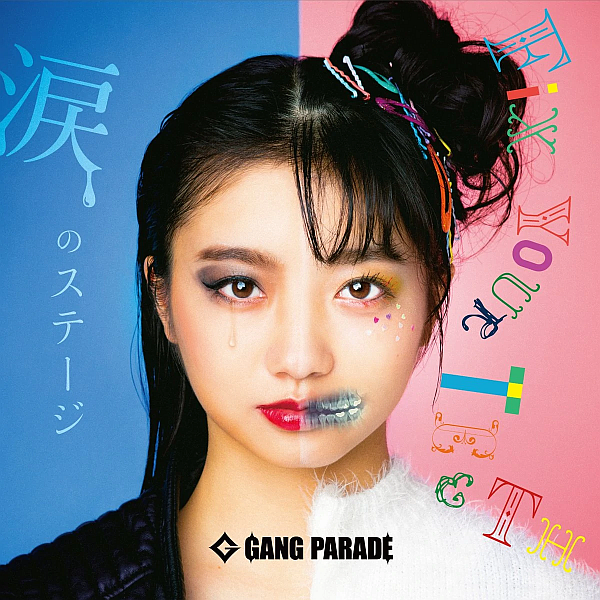 My thoughts on “Namida no Stage / FiX YOUR TEETH”, the latest single from GANG PARADE.

I didn’t really think I’d be back to reviewing WACK releases quite this early in 2020 but hey I’m always game to hear what the production juggernaut is working with lately. They’ve been appealing a bit more to my personal tastes in music recently which is always good, especially after spending the bulk of 2019 putting out what was in my opinion some pretty disappointing musical content. You can’t win all the time though so I always try to come into these reviews with as open of a mind as possible.

GANG PARADE are the latest WACK group to benefit from signing to a major record label, though perhaps predictably the results have been a little mixed since doing so. Their debut single “BRAND NEW PARADE” (review here) didn’t exactly set the world ablaze and their contributions to the Magicami PC game by way of their “THE MUSIC AND THE GAME CREATES MAGIC” EP (review here) were certainly experimental but not going to appeal to everyone. They closed out the year with their major label debut album “LOVE PARADE” (review here) and I think they ended up getting the balance of core sound, experimentation and tie-up commitments about as right as they could have so a pretty high note to end 2019 on.

The group’s first release of 2020 is a double a-side single titled “Namida no Stage / FiX YOUR TEETH”. For most people the biggest news around this release is that Maeyamada Kenichi, or Hyadain, will be behind the production desk in collaboration with Matsukuma Kenta. A pretty big name who has done some pretty big things with the likes of Momoiro Clover Z, Dempagumi.inc, Shiritsu Ebisu Chugaku and more. What is he going to bring to the table as far as GANG PARADE is concerned is anyone’s guess though. That said, I’m quite interested to find out so let’s dive right into this review.

So when I see a song with a title like “Namida no Stage” my mind instinctively starts to imagine some sort of very traditional sounding Idol song. I can’t help it, I’ve been in this game way too long now and it’s just ingrained in me at this point. The very Maison book girl-esque opening moments of the track with the ticking clock and ambient synthesizer tones weren’t exactly what I was expecting then. I think it’s a pretty nice, mellow composition even if the click track thing they’ve got going on along with it gets mildly annoying after a while. The vocals are nice and clean, with a very pleasingly rich tone to how they’re sung. It’s all a very lowkey affair so don’t expect a ton of that typical GANG PARADE energy, well until the chorus comes in at least. Not exactly a dramatic change in tone or tempo but the vocals start being belted out with a bit more power and the instrumental takes on a slightly bouncier beat along with a more energetic rhythm. It’s an effective change of pace while still being very much in keeping with the overall tone of the rest of the track. That’s pretty much the story of the song, outside of a glitchy saxophone part during the bridge which was a bit odd but whatever floats your boat I suppose. It’s more on the Ballad of things sure but you know, as far as a more serious, emotionally charged song goes this is a pretty entertaining way of going about doing it.

If “Namida no Stage” was a mostly serious and emotionally charged song then “FiX YOUR TEETH” is pretty much the opposite of that in just about every regard. The song’s opening instrumental is chaotic in nature with a fairly eerie and unsettling tone to the whole thing. It’s a pretty messily cohesive blend of quite harsh drumming and a more melodic but still frantic synthesizer part. Vocally things are similarly thrashy and in your face with the lyrics opting for repeating the song’s title over and over for a while before the first verse comes in. The lyrics are fairly catchy here and while the overly exaggerated delivery isn’t exactly groundbreaking stuff from GANG PARADE it fits well with what they’re trying to do here. The chorus is a much brighter and more melodic beast, while keeping up the tempo and energy the song went to great lengths to pound into our ears from the outset. Maybe not quite as many vocal hooks though if you can believe that. I quite like this song just for how over the top and energetic it is, and the very apparent Punk influence probably plays a small part in that too. I’m not totally sure about the one vocal part towards the end though, where one of the members sounds like they’re getting dental work done or something. Like I get that it’s a very literal gag on the song’s title but I thought it more than stood on its own without having to add a comedic element to the proceedings. Just my opinion though, it’s pretty good stuff otherwise.

A pretty solid start to 2020 from GANG PARADE as far as I’m concerned. A couple of really strong songs in very contrasting genres here on this single. I can’t say I can really see what Hyadain brought to this release besides his name but just going purely on results alone there’s very little to complain about here from an objective standpoint. There’s definitely room to talk about some of the decisions that lead us to the end product and how they were went about though.

No matter your opinion on this single, there’s certainly some interesting times ahead for GANG PARADE in 2020. Kamiya Saki is finally hanging it up at the end of the group’s hall tour in May and as this stands this is the last single she’s going to feature on (as well as Haruna Bad Chiiiin who recently quit the group for reasons unknown). I’m sure that’ll change of course but who know where the group will be or what it’s going to sound like after the departure of their iconic leader. Only one thing is for certain in Idol and that’s that everything changes eventually.

Enjoy the content? Consider supporting the site on Patreon for as little as $1 a month.
gang paradesingle reviewwarner music japan
0 comment
FacebookTwitterTumblrRedditEmail