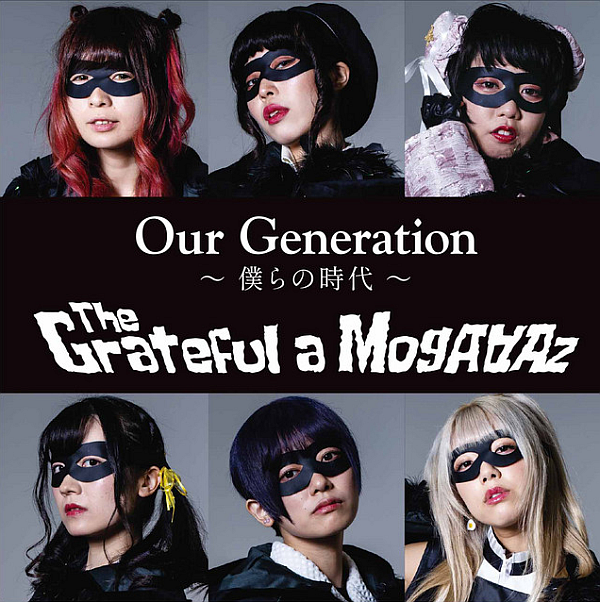 My thoughts on “Our Generation -Bokura no Jidai-“, the first single from The Grateful a MogAAAz.

2019 was a pretty interesting year for many reasons, some good and some not so good. It was also a year of discovery for me as I threw myself head first into writing for this site, trying to cover as many different groups and releases as time would allow. I think I made a pretty good job of it personally and I ended up listening to some pretty cool music from some groups I might not have checked out had I not set myself such a challenge at the start of the year.

Now, there was never really any doubt that I was going to check out The Grateful a MogAAAz. They’re a group produced by the same people who manage Melon Batake a go go and you all know how much I like that particular group. They started out with 8 members but are currently operating with 5, such is the way things go with Idol groups. The line-up features some familiar faces if you follow some of the lesser known groups and solo projects that they’ve been in over the past few years. For most though, this will be their first introduction to a group that is really only just getting started.

“Our Generation -Bokura no Jidai-” is the first single from The Grateful a MogAAAz. It comes in 3 different versions, each rocking a different b-side, for 4 tracks in total. If that sounds a bit pricey for you then there’s a digital EP with all of the tracks so they’ve got you covered there. I actually know exactly what to expect from this single for a change because I’ve seen the group perform all of these songs many times on my recent Tokyo trip, but live performances and studio recordings are never really the same thing are they? If you’re not familiar with the group hopefully you’ll give them a try after this review and if any of the members happen to be reading this I’m sure I’ll hear all about it on Twitter or when I see them again later in the year.

The single’s title track “Our Generation -Bokura no Jidai-” (a cover, originally written by Japanese Punk band Samurai) opens with an instrumental that has a pretty familiar feel to it if you’ve checked out some of the deeper cuts from Melon Batake’s discography. By that I mean it’s an upbeat Rock track with a bit of a Pop shine to it, along with some Punk twang to give it a little bit of an edge. Once the vocals come in the song loses the brightness and replaces it with chugging Punk guitar riffs and an upbeat and very catchy drumbeat, both of which play a pretty big part in complimenting both the structure and delivery of the song’s lyrics. Speaking of the vocals, they’re pretty cool and pretty true to the style of song that the instrumental is laying out for them. There’s a bit of a gang element to the delivery of the verses, with deep natural singing being a big feature and it’s definitely what this song called for. The lyrics are also pretty catchy, which you’d expect from a song with Punk roots and the way they flow works well with the tempo of the instrumental too. The brightness gets ramped back up for the chorus though, with a synthesizer melody being pushed to the front of the composition and the guitars dialed way back, but the drumbeat is retained so as to not lose all of the energy that had been built up. The vocals get a bit brighter too but they maintain their tone and cadence for the most part, which sorta feels like a slight missed opportunity but the hooks in both the lyrics and instrumentals go a decent ways to making up for it. They do kick things up a notch or three coming out of the bridge later in the song though and we get a nice fiery crescendo to a pretty awesome track in my opinion.

Our first b-side from the single is “Asahi no ataranu kono heya de” (another Samurai cover by the way), which features on the “Type A” version of the release if you’re picking it up physically over the digital option. Starting off with that ever so familiar Punk/Rockabilly beat, this time coming to us through the avenue of some very deep, bass heavy synthesizers paired with much brighter sounding crash cymbals. The vocals don’t take too long to make their presence felt on this one either, packing in a ton of attitude while they crash the party and set the song off on a slightly more melodic tone from that point forward. This is achieved by dialing back the bass tone and introducing a guitar riff that while still pretty crunchy also adds a more rhythmic dimension to the song. Getting back onto the vocals for a bit and yeah, they’re definitely mixed to feel like they and the instrumental are one combined work. They sit more towards the middle of the mix which probably both helps and hurts them a little in that they do somewhat struggle to cut through at times but also, this song is done in a pretty Punk style so crisp, clear vocals aren’t really the done thing anyway. That certainly seems to be backed up by the style and tone in which they’re delivered too, very much sounding like a rough cut. That said, the lyrics are really catchy and especially so in the chorus and the instrumental carries a really nice raw energy and is also rather catchy too in its own way. You might have to be a bit more predisposed to liking Punk music that most to get the most out of this one but I rather enjoyed it myself personally.

Next up from the single’s collection of b-sides is “Ore wa machikutabire teru” which you can find…yep you guessed it, on the “Type B” version of the physical edition of this release. Definitely a much slower start than the previous track we listened to and also a rather interesting blend of twangy Rock and digital synthesizers being the key takeaways from the opening moments of the song. It’s kind of curious that the latter of those things ends up not making many appearances for the rest of the song all things considered. Anyway, if you enjoyed the personalities on show on the previous b-side then you’ll be happy to hear that this one is packing more of that in too. Though this time it’s a bit more refined and mature sounding because believe it or not this song is kinda just like that despite the somewhat out of place but still rather quirky synthesizer elements. I really love the tone of the vocals up and down the track, but especially the lower notes of the verses and the solo parts where each of the members got their own chance to shine for a few seconds. The almost Hip-Hop flow during those particular parts is perhaps a little bit unexpected but it’d be hard to deny that it works rather well. The instrumental doesn’t get left out either, with some pretty cool little guitar riffs and a short piano melody or two popping up from time to time to add an extra layer or two to what is already a very enjoyable song even without adding all of this extra seasoning to the pot. Great song, but I feel like I’m saying that a lot in this review.

Last up as far as songs from this particular single goes is “Kaze ga zawameku, Blues ga kikoeru” and if you guessed that you could find this b-side on the “Type C” version of this single then you’re pretty smart aren’t you? We add even further to the variety this single is showcasing with an opening synthesizer instrumental that is very atmospheric in nature before bringing in a much more robust, mildly distorted beat. It makes for something of a foreboding atmosphere and the vocals don’t do much to mitigate that feeling when they’re added into the mix. Saying that the delivery is a bit deadpan sounds incredibly harsh, but compared to previous tracks the tone and deliberate pacing of the delivery of the lyrics definitely give off a much more serious tone. There are some pretty cool echoed harmonies though so there is some variety here and the lyrics are pretty catchy, just in a different way than most Idol songs usually opt to go for. Things do lighten up a bit as the song progresses, not too much but some brighter synthesizer melodies do start to creep in and the vocals do take on a more melodic tone to match this. By the time we reach the end of the track there’s a pretty good flow and rhythm established and if you’re into that deliberately paced, more atmospheric style of song then this track is definitely worth checking out in my opinion. It’s a bit of a slow burner this one but they do reward you if you choose to stick with it.

This single contains a ton of personality, as do all of the members of The Grateful a MogAAAz for that matter. It also does some pretty cool stuff with the whole Punk Rock/Rockabilly sound by combining it with some other genres that you wouldn’t typically associate it with. If you’re already a fan of Melon Batake a go go then you’ve probably already checked this group out but if you haven’t then I have no hesitation recommending that you do so. They’re both produced by the same people after all.

It’s going to be interesting to see what 2020 has in store for The Grateful a MogAAAz. They’re still very much in that feeling out phase right now, despite all of the things that they’re already doing and have done as a group. Having a line-up of veterans definitely helps in that regard for sure but we’re still only one single in and I’m sure there’s going to be a ton of ups and probably a few more downs for this group over the next 12 months. That’s Idol folks but I’m all in on this group and happy to be along for the ride.

Enjoy the content? Consider supporting the site on Patreon for as little as $1 a month.
Gollipop Recordsingle reviewThe Grateful a MogAAAz
0 comment
FacebookTwitterTumblrRedditEmail