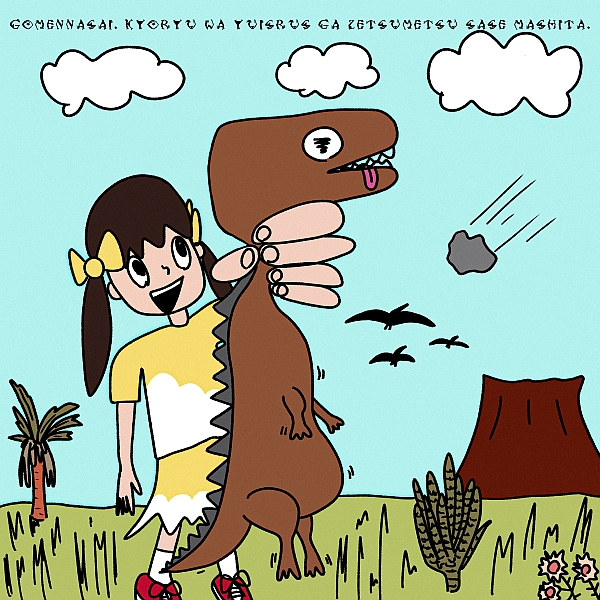 Going to Japan and catching a bunch of Idol shows is for me one of the main ways that I find out about new acts or just end up paying a bit more attention to some than I otherwise might have. In some cases it’s the only way you’re going to see or hear much about the group/soloist/etc because they’re not exactly focusing on putting a bunch of content out online or blessed enough to have the connections required to record and distribute their music on a wide scale.

Yuisrus is a solo idol who some of you might remember from her time in You’ll Melt More! before she graduated from that group all the way back in 2014. After an almost 4 year break, at least some of which was spent devoted to her studies, she returned to the Idol world in April of 2018 as a soloist. I’ve been aware of her for about a year or so after having seen her a couple of times at the tail of 2018, but I’ve never really had the opportunity to feature her and her music on the site until now.

“Gomennasai. Kyoryu wa, Yuisrus ga Zetsumetsu Sase Mashita.” is one of two mini-albums recently released by Yui and they’re pretty much the first widely distributed recordings of her material. This particular release has a very long name and also features 5 tracks so a pretty decent first outing and that’s before we get onto the second mini-album in a future review which also features 5 tracks. I’m a fan of Yui’s live act and how silly and fun it is so I’m hoping some of that translates onto tape. If this is your first time hearing any of her music then get ready, it’s going to be an interesting one.

I suppose for a lot of people the most standout thing about “Sonna Song” as it gets underway is going to be the vocals. Yui has quite a high pitched singing voice and there is a certain childlike quality to it as well, both being played up a little bit of course because she does play somewhat of a character for her act. Accompanying the vocals on this outing is a pretty upbeat and cheerful sounding Synth-Pop instrumental that makes use of quite a few sparkle effects, a playful drumbeat and things of that nature to really impress that feeling of innocent joy onto the listener. It’s not all hyperactive energy and rainbows all or even a lot of the time though, there’s quite a few moments that are more subdued instrumentally and the vocals take on a slightly more natural tone. The chorus also has some pretty nice hooks and I’m confident you’ll be humming along to it in no time. I say all this but in all honestly, what you hear is what you get from Yui really. For better or worse because I’ll be honest, there isn’t a ton of post-production on the vocals and there’s times a lot of people are probably going to say they don’t sound very good. I like the purity and earnestness of it all though, it’s rather refreshing honestly. It’s good, clean fun and there’s nothing wrong with that.

The second track on the mini-album “Gainen” takes a significantly different path to the previous song, this time opting to open with a rather nice piano piece which most people probably weren’t expecting. Well you all got faked out because very quickly we’re back to that upbeat, synth heavy Pop sound and this time with a bit more energy than the previous outing. The verses settling down a bit, with a quick pounding drumbeat and some light guitar being chosen as the backdrop on which Yui can do her thing. It’s sort of a blend of styles in a way, drawing on the classier idea introduced by the piano opening but with an injection of that Synth-Pop energy. The lyrics here have a great flow to them and are pretty catchy, with the exuberance of Yui’s personality once again shining through for all to see. The chorus is built up to rather nicely and when it hits the tempo gets bumped up a few notches and the instrumental and vocals get a bit more energy behind them as a result. I really like the chorus on this song, the lyrics are really catchy once again and it’s just fun to go along with the obvious call and response parts. Yeah, the vocals aren’t mastered to death and it sounds like something you might hear live but that’s what gives Yui her charm in my opinion.

The Chiptune inspired opening melody of third track “Mugendai ∞ Nichiyō Kyoku” just sort of makes you know that you’re probably going to be in for a pretty fun time somehow. Said melody plays a fairly significant part in the song’s bouncy and upbeat synthesizer dominated instrumental. There’s a lot of interesting stuff going on though and it’s kinda tricky to pick out on a cursory listen. I really liked the use of the clapping, crowd cheering and all of the other little things that went into this song’s instrumental besides the glaringly obvious beat and synthesizer melody. It all combines together to create this really fun, almost party like atmosphere with a highly infectious energy to everything going on. Yui is firing on all cylinders vocally too, with tons of her personality on show as she playfully invites us along to take part in the festivities. Probably the “best” singing performance out of the three tracks we’ve listened to so far but then she does also end up playing janken with the listener for a decent chunk of the song as well. It is all a little bit ridiculous and over the top, even I can admit that, but there’s definitely a spot for this kind of thing and when the songs are as entertaining as this one is anyone really complaining?

“Rarirurehon Genba” calms things down a little bit while still keeping it fun and lighthearted, with an opening instrumental that feels somewhat restrained while also containing an excited energy that feels like it’s just waiting to bubble to the surface. A very dense, bass heavy beat is then introduced when the vocals come in, with the synthesizers firing off the odd quirky noise here and there to keep with the overall theme of the mini-album. While all of this does contrast effectively with Yui’s lighter vocal tone, which is also noticeably more subdued here too, you are sort of left wondering if/when the song is going to spring into life. Well that eventually comes after the song builds its way to the first chorus, getting brighter and brighter bit by bit along the way. When the time comes the tempo picks up and the synthesizers get let off the leash and we’re treated to a colorful array of sounds that couple very well with Yui’s earnest delivery of her lines. We then sort of work backwards until we’re back to the verse style we began with, though the journey between the two points was pretty entertaining with some nice recorder melodies being used to keep things bright and cheerful. It’s also not something you hear everyday either which is neat. That’s kind of the general structure of the song, with a few other instruments and synth sounds sprinkled in occasionally. Overall it’s an interesting mixture of styles on this track but a pretty nice showcase of many of the aspects of Yui and her sound.

Closing things out on this first mini-album is “Zundoko kōtai kyoku” which, after briefly opening with a synthesizer piece that sounded a bit ominous, explodes into color with a very loud and electronic sounding melody being the main driving force behind the instrumental for a short time before we’re back to that kind of uneasy, mildly gothic vibe. That sounds absolutely ridiculous given the context of the rest of this release, and it is featuring some more lighthearted elements like sparkly synth accents and fanfares, but it is as accurate a description as I can come up with for what I’m hearing. Yui doesn’t totally go along with it with her vocals, but I did like the way a few of the lines would hit on a particular beat for some added punctuation. The chorus perhaps expectedly is a much brighter affair with a ton of sparkles getting thrown off by the synths and the vocals become lighter and more high pitched which even I’m not too keen on in this instance. Once again I love the use of the recorder here, it’s just this fun little addition to the song that makes it a bit more unique. We get a good deal more of it towards the end of the song too, but not before a pretty cute call and response section that may feel like it goes on a little too long depending on what you’re here for in the first place. A bit of an odd one even I can admit but you made it this far so hopefully you’ve accepted your new lord and savior Yuisrus by now.

I don’t know about you guys, but I rather enjoyed this mini-album. Sure, Yui’s vocals and musical style aren’t going to be for everyone but I don’t think there’s really enough stuff getting released lately that’s just some good, honest fun. It doesn’t have to be a super serious, high production affair to be enjoyable after all. Well, that’s what I think anyway and hopefully a few of you might also have found this release to be a good time too.

So this review is sort of a part one of two as Yui did release two mini-albums at the same time and it would be rather rude of me to only write about one, wouldn’t it? Look for my thoughts on “Getsumen Sao Paulo Keikaku” (yes, that really is the title) in the not too distant future and go check out more of Yui in the meantime if you heard something here that you liked. She’s really great and I hope more people can discover her and appreciate her talents as an artist and entertainer.

Enjoy the content? Consider supporting the site on Patreon for as little as $1 a month.
HAWHA MUSIC RECORDSMini-Album ReviewYuisrus
0 comment
FacebookTwitterTumblrRedditEmail