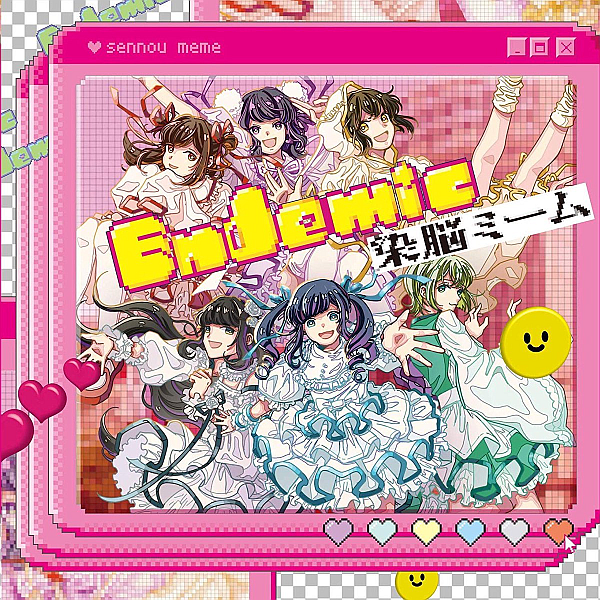 My thoughts on “Endemic”, the latest mini-album from Sennou Meme.

The life of an up and coming Idol group is fraught with challenges and setbacks which seek to derail momentum and frustrate the creative process at every turn. It doesn’t entirely go away after you “make it” either but a certain level of success does provide some insulation from the sort of setbacks that are part and parcel of the Idol business. For the vast majority of groups though it’s very much the case of seeing how many times you can get back up after being knocked down.

Sennou Meme have found themselves in such a position for much of 2019, with line-up woes being the main issue that the group has been dealing with since the release of their rather enjoyable debut mini-album “Epidemic” (review here) all the way back in January. Having several members leave not long after the CD’s release certainly wasn’t the plan but they’ve toughed it out and now boast a line-up that is 6 members strong, carried out a successful crowd funding campaign and look to have as much if not more momentum behind them as they did at the start of the year.

They also put out the release that I’m going to be writing about here today. “Endemic” is the second mini-album from Sennou Meme and their second widely released CD to date. It features 5 tracks and outside of the opening one it seem like we’re looking at all new material which is pretty cool. I was definitely surprised by several of the songs on the group’s debut release and many of the influences were also unexpected. I’ve learned my lesson and won’t be judging a book by its cover again though so let’s get this review going and see what Sennou Meme have cooked up for us this time.

The mini-album gets underway in a pretty straightforward way, giving us a short introductory track titled “Sennou Meme 2” which I believe the group also currently use as their walk-on music when performing shows. It’s a little over 90 seconds long so there’s not too much to really get into here but it’s a nice composition that combines a retro inspired synthesizer sound with some drums that are bit more brash and in your face. The only vocals featured repeat the group name over and over, drawing out or repeating various syllables to give a bit of variety to the delivery. Like I said, not too much going on here but for an intro track it’s more interesting than some that I’ve heard recently, that’s for sure.

We properly get underway with second track “Karmaru” which is basically “Karma” with a “ru” at the end of it if you’re reading it in Japanese. Tried my best to romanize it folks, it what it is. The experimental side of Sennou Meme is on show early doors here, with an opening instrumental that brings together piano and elements of Chiptune to create an interesting mix of sophistication and retro arcade sounds. It settles down into a pretty smooth Piano Pop arrangement when the first verse comes in which is probably going to surprise a lot of people if they did make the error of judging this book by its cover. Speaking of the vocals they sound bright but pretty natural here which I thought made for a pleasant listening experience and there was also a nice amount of range on show too. There’s then a subtle shift in the song which is marked by the introduction of a horn section and an uptick in the energy being output from the vocals. The horns don’t feature quite so prominently for the rest of the track but they do have their moments. Instead we’re treated to a mid-song guitar solo, a more prominent and playful sounding synthesizer melody and a bit more of that opening piano. I did feel like the vocals were a bit too high pitched a times as the song got going but it was still a pretty fun and interesting listen and there’s some nice hooks in there too.

The sound of running water and an acoustic guitar are what first greet the ears on this mini-album’s third track “Amagasa Vogue”. Hard not to get a bit of a Maison book girl vibe from all of that if I’m being honest, especially when they bring in a few bits of percussion to start fleshing things out even more. The vocals once again are bright and fairly clean with just a little touch of reverb to make them ring out like they’re in a big room and not being recorded in a booth. It makes for a pretty vivid atmosphere when you bring all of these elements together, at least in my mind anyway. There’s a slow but noticeable build up as the song progresses, but it’s not until we get into the final third that it really comes alive with a horn section and some mild elements of Chiptune once again being the go to elements to inject a bit more energy into what was still an otherwise very enjoyable song. They kept the pitchiness of the vocals under control a lot more on this track which I certainly appreciated and I kind of liked how the delivery of the lines didn’t change too much in terms of the cadence as it went a long way to tying together what does rather sound like two halves of different songs given their pretty significant differences in tone and mood. I said Sennou Meme like to experiment a bit and this song is a good example of them doing so.

“The Last Magic” is probably the first song from this mini-album that actually sounds like what you’d expect Sennou Meme to sound like if all you had to gone on was the CD jacket and a few profile shots. Opening up with a mellow, fairly dreamy sounding instrumental that quickly morphs into a markedly more lively Synth Pop style with a bit of a Denpa element to it. It’s not a super bombastic affair but it’s still packing enough sugary sweetness to give you a nasty cavity if you’re not careful. I’m perhaps being a little bit unkind to the instrumental with that description though as there’s some pretty interesting instrumentation happening if you listen closely enough and don’t get swept up in the sparkly bubblegum facade. In fact you might end up noticing that this track isn’t too dissimilar to the other ones that came before it on this mini-album. Vocally, this is also probably more along the lines of what you’d expect Sennou Meme to sound like, that being exaggerated, higher pitched delivery of the lyrics but much like the instrumental if you do a bit more than scratch the surface you’ll realize that they haven’t actually strayed too far away from the performances they’ve been putting in on the rest of this mini-album. It’s a catchy, sweet sounding song but it’s still very much sticking to what makes Sennou Meme Sennou Meme.

Closing out the mini-album is fifth track “Tenbyō no Lotus” which gets going in a mildly unsettling way due to the atmosphere that is created by the synthesizer used in the opening moments of the song. A very different approach than the track that preceded it and that’s made even more clear with the introduction of some pretty heavily distorted…guitar I think and vocals that are just a couple of steps below turning into some sort of ritualistic chant. Of course this all gets abruptly turned on its head with the song turning into a pretty bright sounding Pop number that floats somewhere between Ballad and something a bit more uptempo due to the contrast in energy between the verses and chorus respectively. On the vocal side of things it’s another pretty bright sounding effort though not as clean as on previous tracks for some reason which is a little disappointing as I think it would have worked just as well here. Probably the most straightforward song to feature on this release from a compositional standpoint with not too many risks being taken in an attempt to reinvent an already rather well defined wheel. That being said, I did rather enjoy the synthesizer solo that they used for the outro and the opening minute or so was pretty cool too despite the eventual bait and switch that ended up happening.

I’ve said it before and I’ll say it again, take whatever preconceived notions you have about Sennou Meme, rip them up and throw them away. If you judge them like a book by its cover then you’re going to be missing out on some pretty interesting songwriting as well as a group of really talented vocalists. While understandably not for everyone, this mini-album should have more than its fair share of interesting moments that I’m sure many of you reading this would find great joy in discovering.

It seems like 2019’s woes haven’t kept Sennou Meme down for too long, with the group showing just how resilient it can be on this mini-album. It’s like they haven’t missed a beat, even though that obviously can’t be the case. Either way I’m looking forward to seeing how they kick on from here and hopefully they can continue to build momentum coming into 2020. They can’t stay under everyone’s radar for long surely, underestimate them at your peril!

Enjoy the content? Consider supporting the site on Patreon for as little as $1 a month.
Infected RecordsMini-Album ReviewSennou Meme
0 comment
FacebookTwitterTumblrRedditEmail