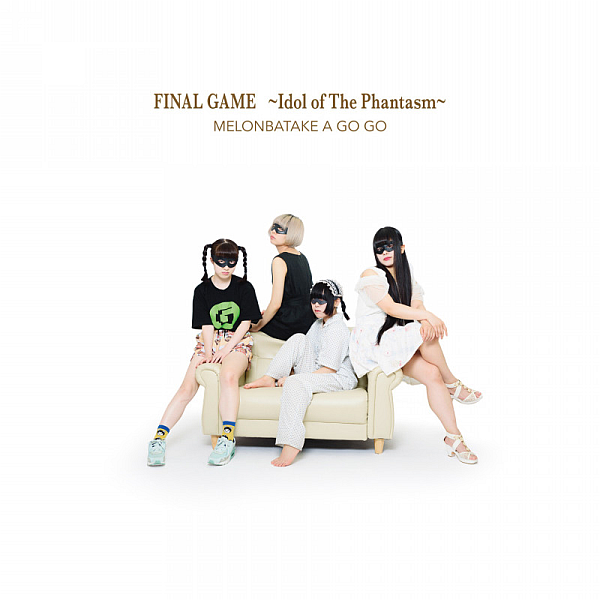 My thoughts on “FINAL GAME ~Idol of The Phantasm~”, the latest single from Melon Batake a go go.

1. FINAL GAME ~Idol of The Phantasm~
2. Ikasuze IDOL
3. GIVE ME SOMETHING

As you’ve hopefully all noticed, I do try to be as objective as I can when I write these reviews. I have my own personal tastes of course but I like to think that I give everything a fair shake. Sometimes we’re not going to agree on things and that’s alright, as I keep saying I’m just one guy with an opinion. I’m not sure what everyone else looks for in this stuff but for me, as long as the music is interesting and/or fun to listen to then I’m pretty easily pleased.

Melon Batake a go go are a group who always provide me with both interesting and fun music to listen to. They’ve had a pretty meteoric rise in 2019, which has seen them sign to a major record label, perform overseas and recently hold a one-man live at Zepp Diver City of all places. Hard to believe that we’d be here a year ago but if anyone deserves it it’s this group of girls. They always go out of their way to put on an awesome show and they’re some of the nicest people you’re ever going to meet, once you get underneath all of those Horror themes anyway.

“FINAL GAME ~Idol of The Phantasm~” is Melon Batake’s latest single and no don’t worry, just because it says “FINAL GAME” in the title doesn’t mean they’re going anywhere. They’re just following up their “NIGHTMARE BEFORE VAMPIRE” single (review here) which came out back in the summer with 3 new tracks. Lately they’ve been trying out some new, less Horrorbilly sounding ideas so it’ll be cool to hear what they’ve come up with this time. I’ve yet to be disappointed by a Melon Batake song though and I’d be shocked if they started now. I can’t wait to check this one out so let’s get right into it and take a listen.

The single’s title track “FINAL GAME ~Idol of The Phantasm~” gets things going with a fairly cheerful sounding, looping synthesizer melody that’s quite bright in tone and slightly bouncy in tempo. A subtle drumbeat and some light, fuzzy guitars are slowly introduced and after building themselves up for a bit the song really starts to get going. There’s a pretty interesting mix of genres going on here folks, with a fairly distorted Rock instrumental and a much brighter, more Pop leaning synthesizer playing off of it and each also getting their own moments to shine too. It’s playful but also a bit gritty, fun but with more than a little bit of an edge to it. It’s just so Melon Batake which I hope makes sense to those of you reading this. Vocally it’s a slightly different story, with both the tone and delivery remaining mostly bright and fairly playful for much of the song. It’s pretty different to what you’d normally expect from Melon Bataka which I think is a good thing because some people seem to think they only do Rockabilly and its variants all the time. Well hopefully this pretty pleasant, catchy number will go some way to dispelling those myths. I’ll admit this isn’t really my usual thing and it’s not exactly what I’m picking up a Melon Batake CD for, but it’s a pretty fun listen and I don’t have any actual complaints about what they did with the song itself here.

What I and many others are usually picking up a Melon Batake CD for is songs like this single’s first b-side “Ikasuze IDOL”. It’s named after the group’s first album and I’d say that it embodies the spirit of that release rather well too. A catchy drumbeat and some thick bass lines greet the ears as the song gets underway and form the backbone of the song for its duration. A quick bass solo later and in come some guitars along with the vocals which have a Lo-Fi quality to them that is pretty present but not overly so to the point where I’m enjoying the song less because it’s there. I think it’s fair to say that this song is pretty chaotic with all manner of guitar riffs popping up all over the place, lots of screaming and just a general sense of unruliness to everything. That being said, you also get the fun stuff that Melon Batake are known for like mid-song quips and the over the top energy that a lot of other groups seem to lack for one reason or another. There’s also a good mix of vocal styles here, with plenty of the lower register being used to good effect while being complimented by a lighter, more energetic delivery to further impress that party mood. Couple all of this with an instrumental that is as catchy as it is energetic and how can you really go wrong? That’s what this song and Melon Batake shows in general are for that matter; full of energy, at times chaotic but almost always a super fun time.

The genre of Country is something that Melon Batake like to dabble with in their songs and this single’s second b-side “GIVE ME SOMETHING” sees them continue to do so with rather enjoyable results. The first minute or so of the track sees us treated to some pretty upbeat, twangy guitar as the main feature of the instrumental. The vocals that it accompanies are performed in a pretty fun sing-along style and everything is kept fairly light, although there is an underlying edge to things which doesn’t go unnoticed. Then the first chorus hits and there’s a big injection of both energy and tempo into the song with things getting a little wild, in a not too dissimilar fashion to the single’s previous track. There’s screaming, a little crowd work and some mild chaos though they keep it a bit more subdued here and the song does retain a lot of the qualities from the opening few verses which is cool. Speaking of which, just as quick as the chorus came it’s gone again and we’re back to calmer waters. That’s pretty much the story of this song really, the verses are nice and pleasant with fairly catchy lyrics then it lets its hair down a bit for the chorus and things start to flow a bit more freely. The build to the climax of the song is also very well executed and it’s even better when you get to witness it in a live setting. On the whole a really nice mix of several Melon Batake musical styles.

This single shows a bit of growth from Melon Batake musically while still staying true to their roots. Perhaps not the horror themed, Rockabilly fright fest that some might have preferred but I feel it’s always good to have a few more weapons in the arsenal and it’s not like we strayed completely off the beaten path when it comes to the songs featured on this release. It’s okay to try new things sometimes, especially when they work out like they did here.

I’m looking forward to both seeing and hearing where Melon Batake go from here. I feel like they’re definitely still on the rise but you’ve got to keep that momentum going so I think that 2020 is going to be an interesting year in the group’s development. They’re already heading overseas again and I’m sure there’s going to be more than a couple of new entries into the discography too. Excited but cautiously optimistic would be a good description of where my feelings lie currently I suppose.