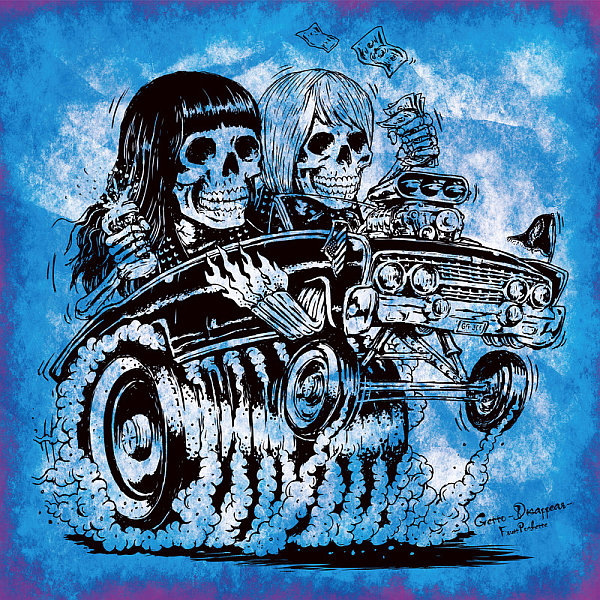 My thoughts on “Tsukiusagi -Disappear-“, the latest single from FRUITPOCHETTE.

As we all know, 2019 has been a pretty brutal year in terms of lots of idols graduating or entire groups just straight up calling it quits altogether. Such is the life of an Idol fan, it’s something that you get used to after a while and you learn to appreciate things for as long as they end up lasting. That being said, 2019 has also seen a few comeback stories which are incredibly rare in this business but if the circumstances are right then sometimes a miracle can and does happen.

FRUITPOCHETTE are a group that fall into this category, although their return did begin in the latter half of 2018 so my carefully crafted narrative isn’t quite water tight. The duo announced a rather tentative comeback plan with a very light performance schedule which they’re sticking to for the most part but they have been performing with a bit more regularity in recent months. Either way, I’m sure there are a ton of people out there who are delighted that Shiori and Mina are back as they’re pretty much considered to be a cornerstone of how this whole “Alt Idol” thing began.

“Tsukiusagi -Disappear-” is the latest single from the pair and follows on from 2018’s “Rasetsu -Broken-” which I didn’t end up ever writing about it unfortunately. What can I say, I’m a busy guy. Regardless I’m looking forward to checking out this single today, as I’m sure that FRUITPOCHETTE have brewed up another fine selection of Metal influenced tunes for us here. Whether this is your first time discovering this group or you’ve known about them forever, you’re probably going to want to stick around for this one.

Opening track finds FRUITPOCHETTE in fine form with the ears being greeted by appropriately distorted, chugging guitar riffs and a thunderous drumbeat upon first having hit the play button. They do compliment this with a more melodic element by way of some synthesizers and a couple of lighter guitar riffs but for the most part the instrumental is quite the assault on the senses. The vocals eventually come in and I have to say, in 2019 the treatment that they’ve been given just sounds a little odd to me. Now don’t get me wrong, Shiori and Mina both put in powerful performances with some beautiful melodies, it’s just I’m not used to the vocals ringing this clear and being pushed this far to the front of the mix. The instrumental eases up on the intensity just a bit too, instead switching to a pretty heavy, repetitive riff and drumbeat. It took me a minute to re-calibrate my brain but after a few more listens I think I’m getting used to this style again. That said, it’s not quite as obvious during the chorus where the synthesizers are brought back in and fill things out a bit more and I did quite like how they went for a bit of a brighter tone to contrast with the darker mood of the verses. This song definitely feels like it’s a bit of a live anthem and there’s even a few obvious crowd participation spots too. Quality stuff, we’re off to a good start here.

Our first b-side “Dōkoku -Extreme-” elects to kick things off with some good old fashioned guitar noodling in the time honored Heavy Metal style. A very intense, galloping drumbeat serves as the backdrop and compliments things quite well until it starts to muddy things up a bit too much but by that time we’re transitioning into the first verse so it’s not that big of a deal in the end. Anyone taking umbridge with how high they sat the vocals in the mix of the previous track will be happy to hear that they definitely sound like they’re embedded deep into the instrumental on this one. The verses are sung in a pretty low tone and the pacing very controlled and deliberate, unlike the chaotic instrumental that they’re wrapped up in. They up the intensity some for the chorus although the tone doesn’t really seem like it changes too much, though the synthesizer sparkles did a little bit to lighten the mood some. Not the best chorus I’ve ever heard I must admit, it just came across a little weak to me but it’s by no means terrible or anything. One thing I should also probably mention is this song takes an instrumental break for solid minute towards the end, not something you hear every day from an Idol track. There’s some pretty sweet guitar work going on for the duration though so at least it was pretty enjoyable and it also helped build the song to its soaring crescendo in a very roundabout way too. This one ain’t bad but, but I feel like it needs a little something something.

Closing things out is the single’s second and final b-side “Rekka -Destiny-“. It’s a pretty long song at just under 5 minutes in length and is definitely the most distinct of the three featured here in terms of its sound. If you were wondering when a more mellow, sentimental track was coming well here it is. Far from a Ballad though you hear, this one is more along the lines of those emotionally charged Rock songs that Japan seems to love so much. The instrumental does a decent enough job of setting this mood with more great guitar riffs, though I do question if the very dense drumming could have perhaps been eased up on just a tad. Well to be fair, while it might not exactly fit perfectly with the brighter melodies of the verses it definitely does with the chorus when the energy and tempo of the vocal delivery both increase significantly. The lyrics in the chorus are also really catchy too and there’s eve a bit of synth incorporated to to provide a more melodic dimension to the instrumental for these parts. I suppose it’s almost like they’re trying to please multiple masters with this track. We’re also treated to another instrumental break about three quarters of the way in, though it is much shorter than the previous one but still pretty cool. This is a pretty track and it’s up there with the a-side if you were to ask me which track I liked best from this release.

It’s fair to say that I have a few gripes with certain elements of the songs on this single and that’s totally fine. They’re all still really fun to listen to and FRUITPOCHETTE and their producers have delivered another entertaining batch of songs. Are they bleeding edge and full of whatever 2019’s influences of the month are? No, but there’s definitely something to be said about not trying to over complicate things and executing styles that already work well to a high standard.

If you’ve never listened to FRUITPOCHETTE before then I would highly encourage you to go check them out. They’ve got a ton of material in their catalog and it’s pretty much universally considered to be great stuff. Not many groups can say they’ve had such high praise but then again not many groups have blazed a trail quite like FRUITPOCHETTE did back in the day either. They’re pretty much a piece of living history in my eyes.

Enjoy the content? Consider supporting the site on Patreon for as little as $1 a month.
FruitpochetteMad Magazine Recordssingle review
0 comment
FacebookTwitterTumblrRedditEmail