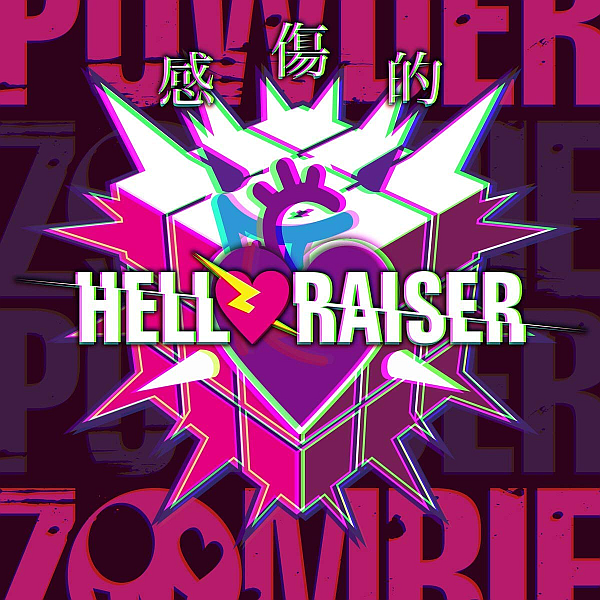 My thoughts on “Kansho Teki HELLRAISER”, the latest single from ZOMBIE POWDER.

Really expanding my horizons when it comes to my writing has been going great so far this year. I’ve covered a whole heap of groups I wouldn’t normally have and we’ve discovered some cool new music along the way too. The only real downside up to now is that there’s actually even more groups that I want to cover…they just haven’t put out a new CD this year for me to write about. What can I say, it’s a good plan but it’s not totally foolproof.

ZOMBIE POWDER are one such group that I’ve been interested in checking out, pretty much since I saw them on a random taiban in Japan last year and thought they sounded pretty interesting. Currently operating as a 3-piece, the group is billed as an “Immortal Horror Punk Idol unit” who aim to infect all of their listeners with their heavy but cute music. That’s a pretty catchy blurb they’ve got there, so hopefully the songs also match it. Horror Punk is also a pretty cool genre in my opinion so more of it can presumably only be a good thing.

“Kansho Teki HELLRAISER” is the group’s latest single and the release that I’m going to be talking about today. It was originally slated to be released in the summer, but the departure of group member Kikuno saw the release get pushed back a few months. Well, it’s here now thankfully and I can finally get the chance to check it out. If it does what it says on the tin, that being Horror Punk in an Idol style then I should be pretty happy with the outcome. I already see a 2019 version of popular song “DEAD DIARY” so things already look to be off to a promising start. Only one way to know for sure though, so let’s get to checking this one out.

Title track “Kansho Teki HELLRAISER” kicks things off in particularly brutal fashion with an absolutely immense combination of thundering drums and distorted, chugging guitar riffs. No time to ease yourself in, you just hit play and there it is, pumping straight into your ear holes with reckless abandon. If you like your music heavy and brutal then this song is doing its absolute best to accommodate you with its instrumental. A wailing scream and a “1, 2, 3, 4” later and the vocals make their first appearance. While a lot of groups would probably go for something a bit lighter, ZOMBIE POWDER instead elect to match the intensity and mood created by the instrumental and put in a very impressive performance. Venomous gang vocals are a key feature of this song’s verses, more shouted at you than sung, but things do get a good deal more melodic once we get to the chorus. While the vocals might ease up considerably, the instrumental still rips through your speakers. This makes for a pretty interest contrast in tones but the power behind the vocal delivery makes it so they never get lost in the chaos of the instrumental. The creepy, violin backed bridge almost feels out of place on the first listen but after a couple of plays it definitely feels like it adds to the “Horror” element of this Punk song. Yeah, this song is awesome and you guys need to hear it ASAP.

Second track “IDOL PRIDE” gets off to the races right from the first second you press play. Quite literally actually, as a galloping drumbeat features heavily at the start of this song. Choir-like melodies seek to sooth the ears after the brutality of the single’s title track as the instrumental begins to slowly pick up pace in the background. Once this song really gets going I’m sort of at a loss as to how to actually describe what it sounds like. There’s a vaguely symphonic element to the instrumental that’s based pretty heavily in what most people would consider Punk Rock. The vocals initially take on a similar quality, featuring light melodies that are very pleasant to the ear. From around the middle third of the song things fill out a bit more with overall tone of the track getting a little more intense and the vocals possessing a bit more bite to them to match this. There’s still an underlying brightness though and it all combines together to result in this feel-good party atmosphere that not something you hear all that often these days. The chorus in particular is pretty catchy and they repeat it often enough so it’s bound to get stuck in your head eventually anyway, and combined with the very eager energy that the instrumental builds into by the song ends you can’t help but feel like you’re left wanting for more.

“Kubitsuri-dai de kuchizuke o” seeks to provide us with even more variety out of this modest 4 track release. A beautiful Piano Rock instrumental greets the ears as the song opens, and that is pretty much the theme we settle on for the duration. Now that being said, the Rock portion of that equation definitely takes on a much heavier tone as things progress. This makes for a pretty interesting combination when you hear the interplay between the very melodic piano parts and the dense, pounding Rock instrumentation. The vocals for the most part are pretty melodic and sung in a sort of Ballad style without going too far in that direction so as to be inappropriate for the mood created by the instrumental. There’s some really nice clean singing going on in this track, you know just in case you maybe thought that ZOMBIE POWDER couldn’t also do that too. I also appreciated that they calmed the instrumental down for a good chunk of the verses because it definitely would have had too much going on and would have ended up taking away more from the song than it would have added. Only real negative I have from this song is whatever that clinking sound is in the left channel when you’re listening on headphones, not really feeling that. Otherwise this is a powerful, emotionally charged Rock song and a quality one at that.

Like I mentioned earlier, “DEAD DIARY” is easily one of ZOMBIE POWDER’s more popular songs (the MV above is for the original version) but that didn’t stop them from having a hype man gas them up before this final track really got going. It’s a bit weird and I’m pretty sure it was one of the members who did this part previously, but okay I guess. There’s definitely a few other tweaks that have been made to this 2019 version as well, most noticeably the instrumental packing way more punch and several of the vocal lines being punctuated by harsh vocals that weren’t present previously. Outside of that though, it’s pretty much the same song. That being a thunderous Rock instrumental softened ever so slightly by piano that mostly keeps out of the way unless called upon during a calmer, more melodic moment. There’s also a few really awesome guitar parts interspersed throughout the composition which sound immense on this new recording. On the vocal side of things it’s definitely a more melodic affair with a bit of a melancholic tone to the delivery. This also allows for some really deep, rich notes though so I don’t think I’ll be complaining too much about that. The chorus has an awesome presence to it and it’s helped even more with the introduction of the harsh vocals I mentioned earlier. I’m not usually into rerecorded stuff but I’ll definitely make an exception for a song like this.

“Kansho Teki HELLRAISER” is a fantastic single, with the title track in particular really catching my ear. If you like your Idol music heavy, with great melodies or containing a ton of energy and emotion the you have to check this single out. I do kinda wish we’d maybe had a bit more Horror Punk than we got but there was still enough of it there to keep satisfied for the most part.

As I said earlier, I’ve been wanting to feature ZOMBIE POWDER for a long time now and I’m glad I finally got to do so. I suppose now it’s back to waiting for them to release a new CD so I can do it again at some point. In all seriousness though, if you’re looking for a new group to follow and anything I wrote here sounded cool to you then you should definitely check them out if you get the chance. It’ll definitely be worth your while.

Enjoy the content? Consider supporting the site on Patreon for as little as $1 a month.
R-village MUSICsingle reviewZombie Powder
0 comment
FacebookTwitterTumblrRedditEmail