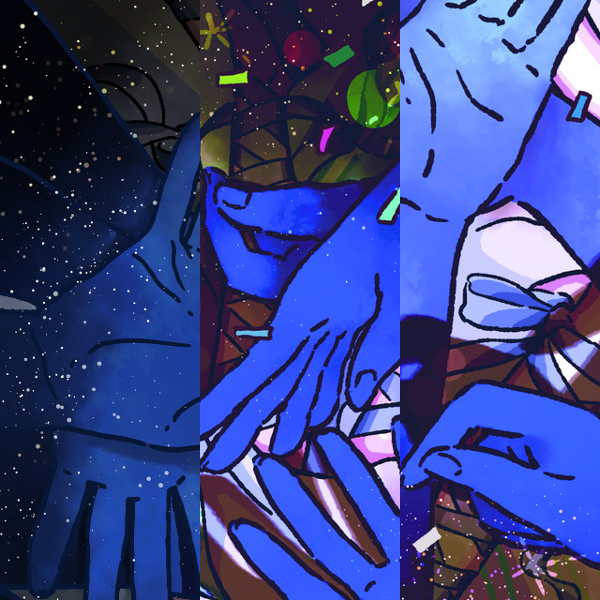 My thoughts on “Cry Out”, “Pocket ni Reverie” and “Ray Line”, the first in a series of venue limited singles from Yanakoto Sotto Mute.

I’m sure most of you have noticed by now, but I have developed a bit of a system for how I do these reviews over the past few years. It’s easy, doesn’t take a ton of time and lets me focus on the stuff that I actually like doing. That of course being the writing about and sharing my opinions on cool music. Well, apparently someone decided I needed to rethink my template by releasing a bunch of material in a way that doesn’t quite fit with my carefully laid plans.

Yanakoto Sotto Mute are a group that we haven’t really heard a lot from in 2019, puns ladies and gentlemen. In fact the biggest piece of news to come out of the group this year for a lot of people will have been the graduation of Rena back in August. Their last musical offerings were a series of 3 EPs released in late 2018, and it was a pretty cool way of releasing a second album I must say. Not cool enough though, as they’ve recently started doing a series of monthly live shows called “NINE” and are releasing a new song at each one. It doesn’t take a rocket surgeon to figure out where they’re planning on going with this one folks.

So after finally figuring out how to shove a square peg into a round hole, I’m going to be checking out the first three songs from this initiative here today. I debated splitting them into their own articles but that’s too much effort and I’m not that thirsty for views. What I am thirsty for is more music from Yanamute and 2019 has been like walking through a desert so far so I’m glad to have finally found an oasis. Man that sounds corny as hell, whatever let’s hit play and see what sort of tunes Yanamute have come up with for this very special project.

“Cry Out” is the single that marks the start of what is sure to be quite the interesting series of song releases. It begins in a familiar Yanamute style, with a guitar riff that is both very clean and quite bright in tone. It creates a soft, almost verging on serene mood so you get the impression that this is going to be quite a melodic song compared to some of the group’s more recent output that has seen things get a little rougher around the edges. This is proven to be the case when some pretty minimally processed vocals are introduced, containing some rather pleasing melodies. The song does build up a bit more steam as it progresses though, with the tempo picking up thanks to the appearance of a drumbeat while at the same time the guitars take on a slightly fuzzier sound. I also appreciated the incorporation of a bit of light piano along the way too. It’s still a fairly mellow affair though so if the initial calmness drew you in the rest of the track hopefully shouldn’t be too much of a departure from that. The vocal work is stellar for the entire duration, which should be expected when it comes to Yanamute because awesome range, melodies and note control are all things that they’re very much well known for at this point. Top quality stuff if you ask me.

Second in the series is “Pocket ni Reverie” which approaches things from a very different angle than the song that came before it. If you were looking for something with a bit more of a cutting edge to it then this song should hopefully have you covered on that particular front. The instrumental is fairly chaotic in a sort of Mathy, Alternative Rock kind of way with a lot of irregular drumbeats and less than conventional guitar riffs being the key features of the composition. If you’ve been following Yanamute for a while now you’ll know that this style is well within their wheelhouse and this is another instance of where they’ve executed it incredibly well. It’s rough and gritty but also catchy in an oddly pleasing way. The vocals match the mood very well, with the raw power and emotion being put into them being of particular note. A lot of people probably know Yanamute for their clean melodies but they can get a little wild every now and then too. Not that there aren’t some rather nice melodies in this song too of course, it’s just that they’re being sing-shouted at you so it’s maybe not quite as obvious. I personally really like this style of Yanamute song so this one is a home run for me all day long.

Bringing us to the end of the first batch of digital offerings from this series is third song “Layline”. This track sort of treads the middle ground between the previous two with the song dividing its time between the mellow and grittier influences that comprise a large part of Yanamute’s established sound. Things start off quite dense, pulling from that Alt Rock influence before settling into something a bit lighter and more melancholic by the time that the first verse hits. The instrumental does still retain a similar influence here, as it does for the song’s other verses too, it’s just a bit more subdued which I think was the right call because you don’t really want to be stepping on the toes of the vocals too much here. Especially not when they’re as impressive as Yanamute’s always are, which is also the case here I’m happy to report. When the chorus comes around things do drift back more towards that fuzzy, denser style and there’s also an uptick in intensity both from the instrumental as well as the vocals. They don’t let it get too out of control though and it’s positively light compared to the previous track, not that they really need to go overboard when the lyrics are as catchy as they are during these parts. I’m probably repeating myself but this is another quality vocal performance from Yanamute and the structuring and progression of the song are just fantastic. More please!

They made us wait a while but this is another wonderful selection of songs from Yanamute. I’d say that of the bunch “Pocket ni Reverie” is my favorite, with “Layline” coming in a close second. Don’t let that put you off checking out “Cry Out” though because that song is great if you’re into the mellower stuff. I dunno man, just go listen to all of them won’t ya?

So now I guess I impatiently wait for the next batch of these songs to make their way onto my streaming service of choice. I think it’s cool that Yanamute are trying different ways of getting their music out there but man, just give me physical album or something eventually please? Their “Humoresque” series didn’t get widely distributed physically for ages and that was pretty lame, so hopefully that won’t be the case with these songs too. What can I say, I guess I’m old fashioned like that.