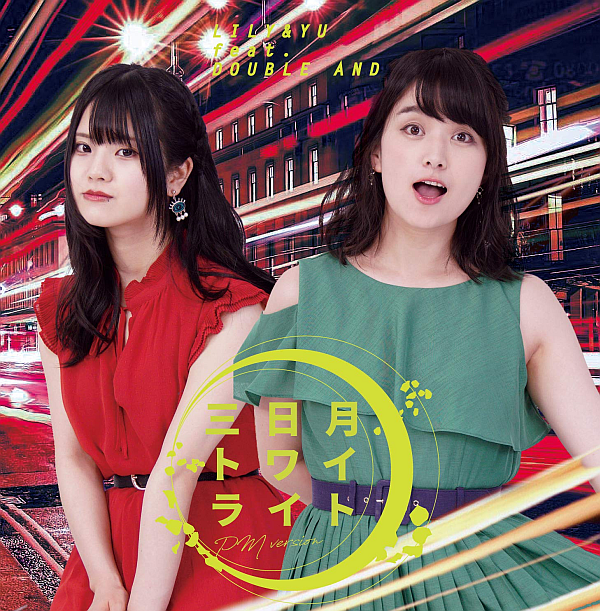 My thoughts on “Mikazuki Twilight”, the latest single from LILY&YU feat. DOUBLE AND.

Sometimes the Idol scene throws up something completely out of the blue and often times it’s a graduation announcement or a group just straight up disbanding. On rare occasion though it’s something pretty interesting and when you find out about it you sort of go “I’m not sure what’s going to be like but I’m up for checking it out”. That was pretty much my reaction when the single I’ll be reviewing today was eventually brought to my attention (it was announced months and months ago apparently) and well I have no idea what I’m about to listen to but here we are.

LILY&YU is the moniker of the solo project from Maeda Yuri who is probably most well known for her 6 year run with Honey Gorun. The duo went their separate ways back in 2018 and since then the Osaka based artist has been carving out a solo career for herself. She’s put out two singles in the past year with the one I’m going to talk about today making three and this time she’s bringing a guest with her. Said guest being Saki of DOUBLE AND, who I’m sure most of you know by now given her multiple trips to the UK in recent years. She’s how I found out about this release in the first place, not that there should be any shame in admitting that.

So yeah, I honestly have no idea what LILY&YU sounds like musically coming into this review. I did debate having a bit of a listen to Yuri’s other material but I thought it might be more fun to just come in blind and see where things go. I’m very familiar with Saki’s music but she is only a feature so I’m not expecting a DOUBLE AND style song, but I suppose I could be wrong about that. I’m assuming something a bit more Pop leaning based on what I know of Honey Gorun and their music but I’m really just speculating and that’s boring so let’s just get this thing going and see what’s in store for us.

Title track “Mikazuki Twilight” starts the single off on a chipper note, with a fairly bright and pleasant sounding synthesizer melody greeting the ears upon having first pressed play. The vocals don’t take long to make an appearance either, coming in with a bit of a filter on them to make it sound like they’re being played over some kind of speaker system. Thankfully this doesn’t remain the case for the whole song as before long everything really opens up and kicks into full gear. This sees the instrumental take on a pleasing drumbeat as a means of fleshing things out a bit more and the vocals become noticeably more energetic as well as being much clearer to the ear. If I had to describe the instrumental I’d probably say that it has a lot of Pop sensibilities behind it, with its feel good synthesizer melodies combining with the infectious drumbeat to great effect. As if that wasn’t enough, there’s even a few moments where things head off in a slightly more funky direction for a pretty nice change of pace. Throughout all of this though, Yuri and Saki’s vocals compliment each other wonderfully with some really great melodies being produced as a result. Couple that with some fairly simple but incredibly effective lyrical structuring and we’ve got ourselves a good time going on here folks.

Following on from that is b-side “Yomichi no ukigumo” which does a pretty good job of lulling you into a false sense of security with its opening instrumental comprised of light xylophones before quickly changing its tune and turning into another energetic synthesizer arrangement. I don’t believe Saki features much, if at all, on this track but since you’re already here you might as well stick around and give this one a listen too right? Despite what the instrumental might suggest, this song is a good bit more subdued than the previous track. This is seen most clearly during the verses where the tone of the vocal delivery takes on a more melancholic dimension along with the instrumental returning to a style that is more similar to what we heard at the start of the song, but still retaining a hint of the energy injection. Things pick up a decent amount for the chorus however, with noticeable uptick in tempo accompanied by a bit more power being put into the vocal delivery. A bit of a song of two halves if you will, but Yuri’s singing is very nice throughout, with some great melodies once again being on show here. Perhaps not quite as instantly memorable as this single’s title track but this is a great showing of Yuri’s range as a singer I feel and even after several listens I was still picking out interesting elements so there’s that too.

I’m pretty sure it’s clear by now, but I only really ended up checking this single out because of Saki’s involvement. I’m sure there’s a lot of people out there who did similarly and well, I don’t know about them but I’m glad that I did. Definitely not something I would pick off of the shelf myself normally but I took a chance and was rewarded with a very enjoyable selection of songs.

Does that mean more LILY&YU on the site in the future? Well, I don’t really see why not I suppose. If any of you reading this feel strongly about the matter either way feel free to let me know. In the meantime I suppose I should probably go check out more of Yuri’s back catalog and see if there’s anything else in there that I’ve been missing out on.

Enjoy the content? Consider supporting the site on Patreon for as little as $1 a month.
DOUBLE ANDLILY&YUSELL TU RECORDSsingle review
0 comment
FacebookTwitterTumblrRedditEmail