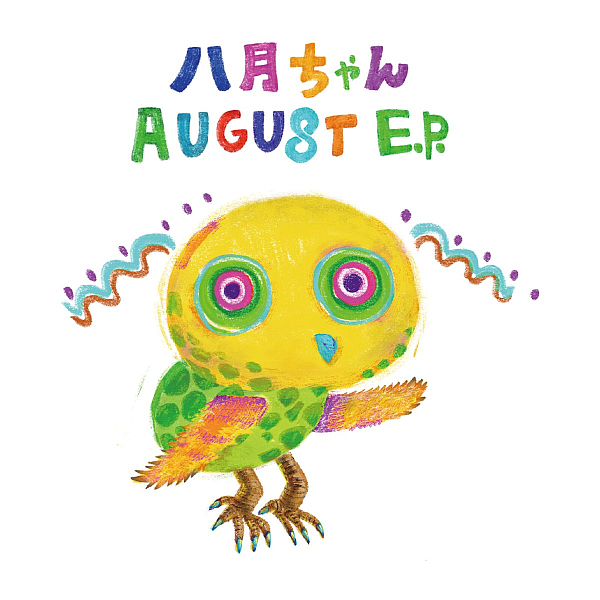 My thoughts on “AUGUST E.P.”, the latest EP from Oyasumi Hologram’s Hachigatsu-chan.

As many of you probably know, Oyasumi Hologram are one of my favorite groups both of those currently active in the scene and just in a general “of all time” sense as well. I’ve been following them and their musical exploits for years and in that time they’ve produced some great songs, though this year’s “5” album release (review here) is probably one of their weaker offerings if we’re comparing things side by side. They also like to do spin-offs, collaborations and things of a similar nature from time to time and that brings us to today’s review.

Enter Hachigatsu-chan, or “Ms. August” as she so helpfully translates for all of us English speakers out there. She’s no stranger to solo work, having released a few demos and such in the past but the aptly titled “AUGUST E.P.” will be her first widely distributed solo outing as far as I can recall. She’s a a pretty unique individual who is incredibly creative and there’s this almost innocent charm to whatever she does, be it musically, artistically or just her demeanor in general. It’s almost impossible not to like her and that’s a rare quality these days.

“AUGUST E.P” has 5 tracks in total and they’re billing it as a work that “showcases Hachigatsu-chan’s worldview as a painter as well as her potential as a writer”. Like I said before, she’s a pretty creative individual and if you follow her on social media you already know that to be the case. The song titles already look pretty interesting on paper and I even recognize one of them right off the bat so I feel like we’re in for a pretty interesting time as we sit down to listen to this one. Won’t you join me as we dive headfirst into the sometimes weird but almost always wonderful world of Hachigatsu-chan’s imagination?

We begin our dive into the creative mind of Hachigatsu with “Kame to Sandwich Pan” which appears to be a song about…turtles and sandwich bread. The songs opens with someone whistling a catchy tune in among quite a lot of rustling noises before counting in the actual instrumental that comprises the bulk of this track. It’s a very pleasant, tropical number made up of various genre appropriate instruments like shakers, xylophone, tambourine and of course a bit of light drumming and I believe in this case a ukulele to round out the very warm, summery vibe the song is looking to create. The last 20 or so seconds of the track in particular are just a total joy to experience from an instrumental standpoint too. Hachigatsu’s vocals float along with the song, dipping in and out from time to time but always possessing a very rich tone that’s pleasing to the ears and also showing off something a bit different to what we usually hear from her Oyasumi Hologram work. This is a very enjoyable song that’s sure to put a smile on your face while you listen to it if you possess any form of human-like qualities. Just great stuff.

Following on from that is “Sea taro no uta”, which is a song that might be familiar to some of you if you follow Hachigatsu on social media. If you do, chances are you’ve heard her sing this song on at least one occasion and you probably know the subject matter too. If not, then all you need to know is that this song is dedicated to the stuffed turtle toy that is always by Hachigatsu’s side. Granted this is a slightly fancier rendition of the song than we’re used to, making use of some pretty interesting channel mixing for the instrumentals which see guitars twang away to the left while the right side is left occupied by the drums and bass. A bit of percussion is also sprinkled in to continue with that theme and it all ties together to create a sentimental but feel good mood. Hachigatsu’s vocals supplement this wonderfully with some really nice emotion and melodies on show throughout. The lyrics are also very deceptively catchy and I’m sure you’ll find yourself humming along to them in no time. It’s a song about a stuffed turtle folks, but damn if it ain’t the best one I’ve ever heard.

We change things up a bit on the EP’s third track “September, sora tob kame o mita” which is probably going to sound the most like a “normal” song to most of you out what we’ve been hearing so far. The instrumental is pretty heavily focused on the good old fashioned combo of guitars and drums though I have to say that the latter is coming through as the most dominant feature of the instrumental for a good portion of the song. The guitars do have their moments of course but a lot of the time they’re more focused on delivering muted tones that stray more towards the ambient end of the spectrum. There’s a more melodic undercurrent involved too, with what once again sounds kinda like some percussion but it does have a bit of struggle to make its presence known with everything else that’s happening around it. What doesn’t have any trouble making their presence felt however are Hachigatsu’s vocals. Once again she delivers a beautiful, melodic performance with the lyrics ringing out with a clarity that is a little at odds with the song’s instrumental but contrasts and all that, right? I’m not really sure what else to say here, Hachigatsu is a great vocalist and this song is yet another example of that. From fun to more serious, she really can do it all.

If you’re a fan of the Chill-Hop craze that is currently sweeping Japan then perhaps surprisingly this EP also has you covered on that front too. Granted, “Kimi to boku no hika to kage” is a pretty mild example of the genre but its influences are pretty clear for anyone listening to the song to hear. Right from the start you’ve got a nice mellow beat that serves as a backbone for the rest of the instrumental which builds in some pretty nice ambient synthesizers along with a few added percussion elements to both continue along with the EP’s underlying theme and also just to spice things up a little bit. It all makes for a smooth and relaxing listen which is pretty much the goal of this genre so I’d say they pulled it off pretty well here. Also smooth and relaxing are Hachigatsu’s vocals which isn’t a surprise to anyone familiar with her but I think the casual listener will be pretty impressed with the tones and melodies on display here. She definitely catches the spirit of the track that’s for sure with the delivery and emotion behind it really complimenting the overall mood rather well. If you’re looking for something energetic then this isn’t really it but hey, it’s nice to take a load off and relax from time to time right?

Closing out the EP is “Konpeitō” which I believe is a type of Japanese sugar candy. That’s what good old Google-sensei says when I type it in anyway so let’s go with that. The opening synthesizer instrumental definitely reminded me of Oyasumi Hologram quite a bit and honestly that feeling remained for pretty much the entire song. Yeah, definitely something I could see the duo performing together though the absence of Kanamiru certainly isn’t a major problem as Hachigatsu more than handles the vocal duties just fine by herself. It’s a bit of of a darker, more melancholic sounding song than what we’re used to from this release but I think that makes it stand out in a way. This is reflected in both the tone and more deliberate delivery of the vocals which makes for some pretty emotionally charged moments where Hachigatsu really pours her all into the performance. The instrumental provides much of the darker mood with some pretty ominous, bass heavy beats accompanied by an appropriate amount of reverb on the bulk of the rest of the synthesizers outside of a few more melodic moments that stop things from taking on too dark of a dimension. A pretty interesting way to close out this EP but looking at it more broadly it’s hard not to be impressed with the range of styles showcased here.

“AUGUST E.P.” is a release that while perhaps looking like just a little bit of fun on the surface definitely has a lot of very compelling material to offer if you decide to do more than just scratch the surface. From the feelgood and whimsical to the darker and more emotive, Hachigatsu really shows that she can do it all on this release and I couldn’t think of a more appropriate collection of songs to serve as her solo debut than these ones.

I’m not really sure if this is going to be a regular thing from Hachigatsu or more of an occasional project that gets returned to every so often when her work with Oyasumi Hologram allows for it. Either way I’m definitely looking forward to more at some point in the hopefully not too distant future and I really think that if this is anything like her other art projects then the sky is the limit for what Hachigatsu can both do and achieve with her solo career. She’s definitely worth checking out if you’re looking for something new and just a little bit different to listen to.

Enjoy the content? Consider supporting the site on Patreon for as little as $1 a month.
Hachigatsu-chanMini-Album Reviewoyasumi hologram
0 comment
FacebookTwitterTumblrRedditEmail