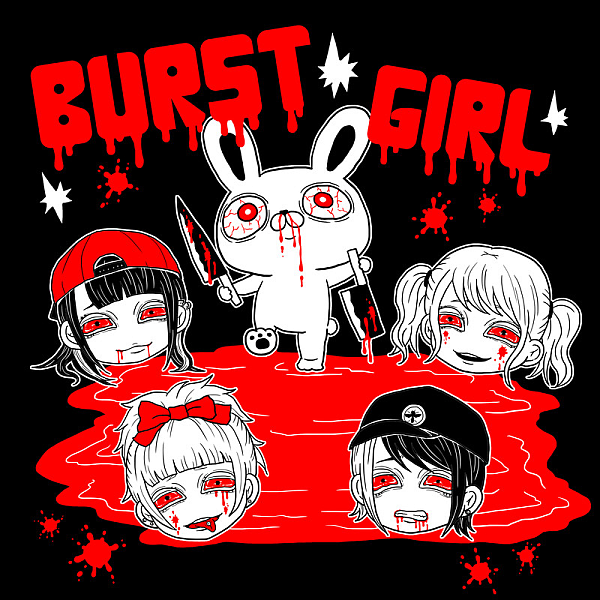 My thoughts on “Gishiki”, the latest digital single from BURST GIRL.

One of the best things about this hobby is when something just comes along out of the blue and surprises you…well, assuming it’s a good surprise and not something like a graduation or disbandment anyway. But anyway, it’s pretty fun when you’re just minding your own business and something cool that you weren’t expecting just sort of falls out of the sky and into your lap. That’s very much the case with the subject of this week’s review, even if the circumstances surrounding it aren’t totally positive.

As most, if not all, of you should know by now Rei has hung up her mic and left BURST GIRL. No dramatic reason for doing so, she just wants to focus on other things like her Punk band Knuckle Chiwawa and I guess trying her hand at becoming a nail technician too if recent tweets are anything to go by. A very significant blow all the same to BURST GIRL, who have been firing on all cylinders in 2019 and it shall no doubt be interesting to observe how they manage to navigate what I’m sure will be a very odd couple of months.

Rei is leaving us all with a parting gift however, and it might be the best parting gift of all. A new BURST GIRL single, released digitally no less, and featuring what I believe to be the only tracks from the original iteration of the group that haven’t yet seen an official release. Something that will hopefully soothe the pain of her departure, just a bit. I’m pretty familiar with one of the tracks included here but the other is a bit more of an unknown quantity. Let’s get this review going and see just exactly what it is that we’re working with here.

I think the first time that I heard “Gishiki” was at Rin’s birthday show last year, and given my not being in Japan much and BURST GIRL’s aversion to posting live videos, I haven’t had much chance to really get my head around the song. Like many BURST GIRL songs, this one comes out of the gate swinging with a very dense and thunderous drumbeat that while very loud and powerful also somehow manages to retain quite a pleasing rhythm. This is of course helped along by the equally immense guitars but I just thought it was pretty interesting how they managed to keep things catchy. The instrumental mellows out a touch when the vocals are brought into play but still keeps a lot of its energy and tempo. It’s a pretty simple structure for the most part but hey, this is Punk Rock we’re working with here. If you want super complex compositions this ain’t the genre for you. On the vocal side of things you get to see both sides of BURST GIRL, with some pretty nice, melodic verses punctuated by some rougher, harsher moments that are used with just the right amount of frequency to really leave an impact. The lyrics are as catchy as ever and are delivered with the sort of energy and enthusiasm that we’ve come to expect from BURST GIRL. If for whatever reason this is your first time hearing BURST GIRL then this track serves as a pretty good introduction to the group.

Given the rather abrupt nature of this digital single’s release, I wasn’t too surprised to hear that b-side “Sentimental⭐︎Yande Night” was a little…rough around the edges shall we say. Nothing so bad as to make the song unlistenable but you can definitely tell it hasn’t had that final round of mixing and mastering. If you’re a fan of Punk music you likely won’t care about that, but you might care about this song’s rather heavily synthesizer tinged instrumental which is kind of an interesting thing to hear out of BURST GIRL. It is accompanying what sounds like a more typical, chugging Rock instrumental though so we’re not straying into completely uncharted territory or anything. Though it’s a little difficult to figure out how things are really supposed to sound due to the aforementioned rough nature of the mix. I do think it makes for a nice mood change during the chorus though. Speaking of the vocals, it’s a bit of a mixed bag and I’m not talking about the very raw nature of the recording either. The verses have a pretty dramatic flair to them which works well with the darker tones being produced by the instrumental but then everything gets flipped on its head for the chorus with a much more bright, upbeat mood being created and accompanied by some sparkling synths. It’s a rough cut so hardly showcasing the song’s full potential, but from what we can hear this one sounds like another pretty strong, albeit rather different sounding entry into the slowly growing BURST GIRL discography.

All things considered, for a free digital single that’s main purpose is to release what is likely the last material BURST GIRL recorded with Rei “Gishiki” is a really enjoyable release. Sure it’s a bit rough around the edges in places but does that really matter when it comes to this group, really? The energy, intensity and most importantly the fun of these songs is what you should be here for in my opinion.

It’s going to be interesting to see where things go from here for BURST GIRL. On the outside it seems to very much be business as usual but I’m sure internally there’s going to have to be some adjustments made. Though given the group’s earnest, DIY work ethic I can’t imagine anything keeping them down for too long.

[Review] xoxo(Kiss&Hug) EXTREME – The Both Sides of the Bloom