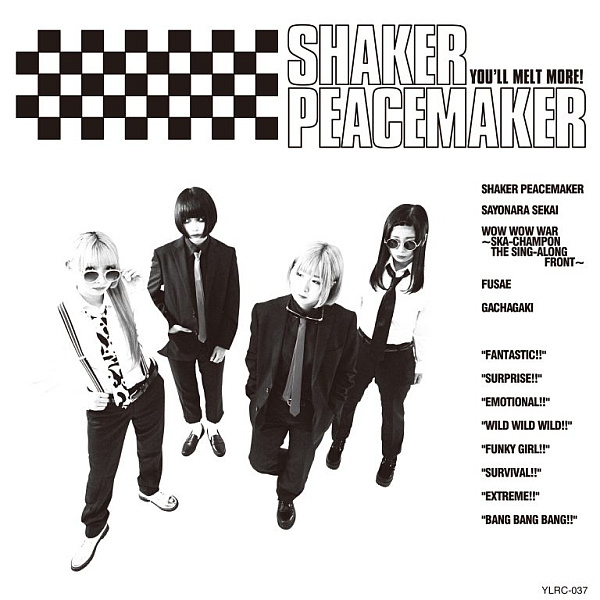 My thoughts on “SHAKER PEACEMAKER”, the latest mini-album from You’ll Melt More!

I’ve been covering quite a wide range of stuff on the site this year, I think that’s pretty fair to say. Lots of new groups being featured, along with a lot of groups that have been around for a while but I just didn’t ever cover for whatever reason. A good development in my opinion, but the grey matter isn’t quite what it used to be so for all of this new information to go in there has to be some stuff that just ends up slipping my mind.

You’ll Melt More! are a group that have done just that since their “NEVER GIVE UP DRUNK MONKEYS” EP (review here) was released last October. Granted they haven’t really been doing that much on the new music front in the past 12 months so I suppose I can be forgiven slightly. They have of course still been playing shows in Japan, but the members’ all seem to have had a lot of outside work on their plate in the last year or so and as such releasing new music doesn’t appear to have been that high of a priority.

Well, You’ll Melt More! are back with a new mini-album titled “SHAKER PEACEMAKER”. The cover is indeed a homage to UK Ska band The Specials’ self-titled debut album so there better be at least one Ska song on here dammit. The title has something to do with “shaking up the world” while also “creating peace” so that’s…something. A couple of the songs have been released digitally in the lead-up to the CD’s release but I haven’t had a chance to check them out yet so I’m very much coming in blind. I think that’s the best way to experience a You’ll Melt More! CD anyway. The randomness and surprising nature of their songs are half of the fun after all.

Well, I did end up getting the Ska song that I hoped for in title track “SHAKER PEACEMAKER”…kind of anyway. There’s definitely the presence of horns right from the outset, accompanying some crystal clear vocals that are pretty much just repeating the song’s title over and over. A pretty simple but effective opener and in line with what you’d expect from a typical Ska style song. Things get a bit more rhythmic from there with the introduction of some fairly prominent basslines that coupled with the drumbeat give the song this really fun, bouncy energy that is pretty infectious. Add in some clapping and a few cool horn section parts and we’ve got the makings of a pretty nice, albeit slightly downtempo instrumental going on here. I wish there was a bit more to say about the vocals but they’re pretty straightforward. I mean, it’s pretty just You’ll Melt More! repeating the title of the song or variations of words that comprise it for about two and a half minutes. It’s not really very complex though they make use of the limited vocabulary very well and it’s catchy and fun to listen to. Could they have done a lot more with it? Sure they could have but for what it is I’d still say this a pretty good song and probably my favorite from You’ll Melt More in a while in all honesty.

Turns out “SHAKER PEACEMAKER” was just setting the table for that which was to follow on second track “Sayōnara sekai”. There’s still some very strong elements of Ska on this track, most notably from the returning horn section that does a really good job of adding to the upbeat mood being created. The rest of the instrumental is a bit more Pop in nature I suppose however it’s a bit hard to pick a lot of it out due to the muted nature of the drums that kind of gunk up a lot of the guitar and…I think synthesizer stuff that’s also going on. Clearly the horn section is positioned as the star of the show in this regard and well, I suppose it’s a good thing that they implemented it really well and with a bunch of hooks that just about distract from everything else that might not be quite as praise worthy. Sharing the spotlight with the horn section are the vocals which once again are coming in very clearly over the top of the instrumental, which isn’t quite so common in Idol music these days so it packs a bit of punch if you’re not expecting it. They have this mild, dreamy quality to them which is a bit at odds with the party going on in the back but it kinda works honestly. It’s a fairly typical You’ll Melt More! performance, with high pitched voices and all that good stuff so there’s definitely a feeling of familiarity to things. I wouldn’t have minded a slightly more catchy chorus personally, but there’s probably enough going on elsewhere that it isn’t really warranted. Another fun one here folks.

How about some Punk with your Ska for this mini-album’s next course? That’s what’s being offered up on rather curiously titled “WOW WOW WAR ~Ska-Champon seishō sensen~”. This song is much more guitar driven, which makes sense, and all of the quintessential Ska guitar riffs are here folks, though it might not have hurt to have given them slightly more definition than they got but I’m likely nit-picking. The bulk of the horn section’s involvement in this song seems reserved to the chorus and its lead-ins/lead-outs which I guess could be seen as mildly disappointing depending on how much brass you want in your Ska Punk song. I think they probably got the balance just about right on this one though all things considered, though I did feel like I should briefly point it out at least. Anyone expecting You’ll Melt More! to really change up their vocal stylings to match the theme of this song probably doesn’t know them very well, but I think their over the top, cutesy, Pop vocals actually work reasonably well within the context of this song. A bit more intensity wouldn’t have gone amiss, but I kinda know what to expect at this point so I wasn’t that surprised. The chorus makes fine use of part of the song’s title which was nice, if not a little bit repetitive. While not ideally what I would have liked to hear from this type of song it’s still a super fun one and I’d definitely recommend checking it out.

The tone takes a very different turn on fourth track “Fusae”. Gone are the Ska and Punk influences, to be replaced by a song that’s…a little all over the place if I’m being totally honest. Things start with a pounding, almost Trance style instrumental where the only vocals of note are the syllables of the song title being repeated over and over, this is a bit of a theme of this release if you haven’t noticed yet. It’s a nice enough listen, though a little uninspired. From there the song transitions into this almost children’s song style which was a little bit jarring in a way but You’ll Melt More’s vocals and usual antics play very well with this sort of thing so while once again not exactly doing anything new it’s a pretty fun moment if you’re into that kind of thing at least. From there it’s back to the pounding beats and synthesizer melodies for pretty much the rest of the song. There’s a bit more variety in the vocal output this time around though which is greatly appreciated, though the aforementioned use of the song’s title is still very much a component that gets revisited here too. They got quite a bit of mileage out of a song that doesn’t even last 3 minutes I’ll give them that, and while not really bringing anything new to the table it’s still a rather enjoyable listen so I don’t really have many complaints here.

Wrapping things up is “Gachagaki” which is the longest track on this release at just shy of 5 minutes in length. It’s also the Ballad because I’m sure we all figured that one was coming. It’s a bit unfair of me to call it that really as they do a pretty good job of wrapping it up in quite the interesting instrumental. It sort of flip-flops between this really bright, and rather Poppy synthesizer style that has a pretty fresh tone to it and a darker, more bass heavy EDM variety of composition to kind of create this light vs dark idea. That’s what I got out of it anyway, I dunno about you guys. The vocals adapt depending on where the instrumental leads them, ranging from airy, sort of bubblegum Pop to more serious, with a richer tone and a bit of edge when called for. Both sides get a pretty even amount of airtime which I wasn’t really expecting but I think it was a good decision, especially if you’re playing up my aforementioned light vs dark idea. I think the brighter material had the catcher hooks while the “darker” stuff had the more palatable delivery, in my opinion of course. As a complete package everything works well together and makes for a pretty cool contrast. I don’t know if we really need to be pushing 5 minutes though as it does start to feel a bit drawn out towards the end there. Apart from that, good stuff.

“SHAKER PEACEMAKER” is easily my favorite release from You’ll Melt More! in quite some time, granted they did make us wait for it. The Ska inspired stuff is definitely my favorite of the mini-album’s 5 tracks but the last two are really enjoyable listens as well, even if they do end up feeling a little bit out of place. Longtime fans of the group should find plenty to enjoy here and curious new listeners should treat this as a solid jumping off point for checking out the group for the first time before continuing on to their other works.

It’s not all good news though as about a week or so ago it was announced rather abruptly that Ano would be leaving the group for reasons that as yet remain unclear. It does seem like You’ll Melt More! intend to continue without her but given her popularity it’s hard not to see this as a heavy blow. I guess we’ll see where things go from here but if nothing else this should serve as a reminder that nothing in Idol is permanent, even if it seems like it is, and that you should enjoy things as much as possible while they last.

Enjoy the content? Consider supporting the site on Patreon for as little as $1 a month.
Mini-Album Reviewyou'll melt more!You'll Records
0 comment
FacebookTwitterTumblrRedditEmail