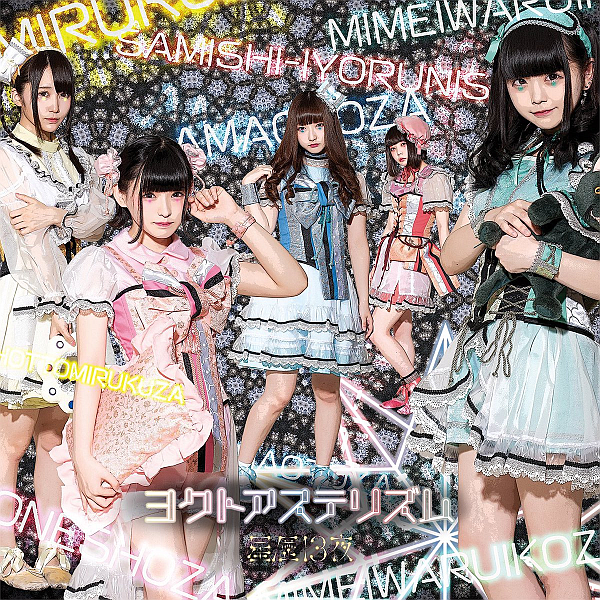 My thoughts on “Yocto Asterism”, the latest single from Seireki13ya

“Change” has once again been the word of the moment for codomomental in 2019, and using this preamble as an intro is getting rather tired. It’s still true though, with each of the company’s Idol properties going through some fairly significant personnel changes in recent months. Just another twist in the rollercoaster ride that is the Idol business, but to their credit it seems that codomomental are handling all of this upheaval just about as well as can be expected.

During all of this, the company’s newest project Seireki13ya have been quietly finding their feet in the background. With two singles under their belt in “Oyasumi Mirai to Koiotome” (review here) and “Aishi Utakata to” (review here) things are slowly starting to take shape as the group continues to develop their sound. While pulling in a lot of elements from their sister group Zenbu Kimi no Sei da’s earlier material is certainly not the worst place to start, I have to admit that I am yet to be totally wowed by any one particular song from the group’s small but growing discography.

They’re up to bat again this week though with their latest single “Yocto Asterism”. It’s a somewhat odd title given that an asterism is a star cluster, which are massive in size, and a yocto is a unit of measurement of 10 to the negative 24. I do my research for this stuff folks. None of that really matters though, we’re all more interested in the music after all I’m sure. I suspect this single will take on a similar style and tone to the group’s previous efforts but we’ll see if they try something new and maybe try to expand on their base sound a bit more. Either way I’m sure this is going to at least be decent so let’s get into it and see what we’ve got going on here.

Title track “Yocto Asterism” starts things off with this sort of glitchy, EDM style instrumental that steadily builds itself up until there is the inevitable bass drop that everyone knows is coming eventually in this sort of song. Things go a bit wild at this point, with a bunch lasers firing off all over the place and a noticeable uptick in energy and intensity. Things ease up ever so slightly when the vocals are brought in but not by that much, with pounding bass still being a very prominent feature of the song. Speaking of the vocals, I’m not really sure what to make of them really. I like the flow of the delivery a fair bit, but I’m not sure if it’s the vocoding or something else but they just seem a bit…dull at times? I suppose I prefer that over the high pitched treatment that the chorus got, where it almost felt like they were going to disappear in the synthesizer melodies at times. Said melodies being a nice, sparkly change of pace to the more dense and intense tone the instrumental had taken on up until that point. The song holds onto some of that energy coming out of that first chorus and carries it through to the end of the song so I’ll ease back on my vocals being dull comment a bit. I ended up being vaguely reminded of CY8ER by the time this song reached its conclusion so I suppose that’s some good praise. Wouldn’t say it wowed me but it’s enjoyable enough if you’re into your EDM stuff.

I’m not really sure what sort of signals you’re trying to send out by naming your song “NarcoLepsy” but I think I kinda get it after having listened to the track. The instrumental starts out with this kind of Chill-Hop inspired sound that takes on an almost tropical feel thanks to the synthesizers. It’s super pleasant to listen to but then a piano gets brought in and it kinda of “harshes the buzz” as the kids might say. I dunno it just sounds kinda sharp in contrast to the chill beats, but after a drop of sorts the rest of the instrumental sort of wakes up and gets with the program. Vocals make an appearance around this point, they’re pretty catchy and have some nice but heavily vocoded melodies. My one knock would be they kinda overdo the pitch which leads to them fighting for space in the instrumental but I guess it’s just the style that they’re going for here so it is what it is. I almost feel like the synthesizer melodies in this song get as much if not more airtime than the vocals and to be honest, given how stupidly pleasant they are I really don’t mind that much. A lot of the vocals feature the same or very similar hooks and structuring and it does come off sounding a little repetitive as a result. I’m not sure what else you’d be expecting from this style though if I’m honest. This isn’t some super complex song with a ton of stuff going on but it’s catchy, has some nice melodies and sounds super fun. Sometimes it’s better to keep things fairly simple and I think this song is a great example of that.

This is a fairly interesting single for a variety of reasons. The a-side “Yocto Asterism” isn’t really going to blow your hair back in my opinion but it does everything pretty well and is a solid, if a little uninspired take on the typical EDM sound. For me the real interest in this single lies in the b-side “NarcoLepsy” which I think probably has the wider appeal of the two songs and definitely tries to present something a bit different to the ears. I don’t know if the style is “on brand” enough to warrant further exploration on future releases however.

Seireki13ya are a group that I’m still in that feeling out phase with, and given the different stuff they’re trying on these singles I think they’re probably still trying to work things out too. There’s definitely some elements of their sound that I like a lot but I’m left feeling fairly similar thoughts coming out of this review as I did coming in. They’re not really doing anything wrong but I’m still waiting for one of their songs to really grab my attention and to be fair, “NarcoLepsy” kinda did here. We’ll see how things go on their next release, which should probably be an album at this point if we’re lucky but I guess we’ll have to wait and see exactly where they go from here.