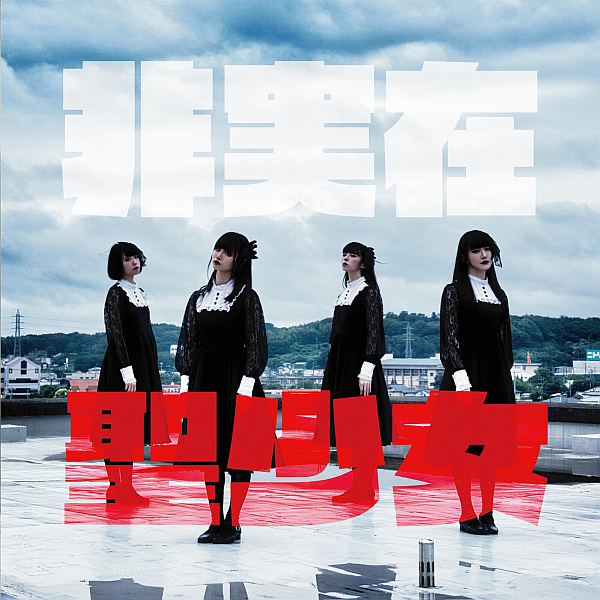 So while this whole “review stuff I otherwise might not” thing has mainly seen me take chances on newer and less well known groups, I feel like I should probably throw in a few that have been around for a bit and are more well known from time to time. There are still a lot of releases from groups that are fairly well established that I sort of glaze over from time to time for various reasons. Mostly it’s down to time but I guess in some cases I do have preconceived notions and I think it’s healthy to challenge those every so often.

jyujyu are a very well established group that I probably don’t pay enough attention to if I’m honest. They’ve got a great look to them and they’re pretty popular in Japan and I suppose in the West now too since they performed in Italy a few months ago? I’m not really sure on the latter honestly. I’m also not really sure what I think about their musical output either. I’ve heard a few of their songs over the years and while I don’t recall actively disliking anything I heard, I also didn’t find myself desperately wanting for more either.

Well, we’re going to give the group’s latest single “Hijitsu Zaisei Shōjo” a spin today and see what sort of thoughts enter my brain while listening to it. I believe it follows up their “Melian” album that came out around a year ago, something I had debated reviewing at the time but its 18 song tracklist was a bit intimidating. In any case, I suppose I’m expecting something a bit dark and dramatic out of this single but outside of that I can’t claim to follow jyujyu enough to really go much deeper than that. It’s going to be a surprise for me folks, and hopefully a happy one if I’m really lucky.

After a brief but rather pleasant piano instrumental, “Hijitsu Zaisei Shōjo” kicks into full gear and to be honest it sounds pretty much like what I expected it might sound like. By that I mean a sort of Gothic sounding Rock instrumental that’s supplemented by synthesizers in various styles. Some of which work a lot better than others I have to say, and I’m mainly talking about that rather loud “ray gun” style one as an example of things I didn’t think worked that well. I dunno, it just sounds a bit jarring to my ears but I am but one man with an opinion. Outside of that though I don’t really take any issue with what they’ve done with the instrumental here. It has that dark, Gothic vibe to it while also packing in a decent amount of energy to keep things sounding fairly lively. On the vocal side of things, it’s pretty much what you’d expect from a song in this style. Haunting harmonies and nuanced solo lines are a heavy feature of the track and it sounds quite pleasant in a slightly creepy kind of way. Not really feeling the synthesized echos they used in places for a sort of “call and response” effect though, just not something I’m into I’m afraid. The chorus is also fairly pleasant though the hook isn’t really grabbing me but perhaps I need to listen a bit more for it to sink in properly. There’s a few things I didn’t care for here but it’s an enjoyable enough song otherwise I suppose.

I’m sure that the title of b-side “4:44” is a reference to something of significance, but as I said previously I can’t claim to be informed enough about jyujyu to make the connection myself. Feel free to chime in if you’re more knowledgeable than I on the subject. Anyway, the song starts out with this ethereal sounding instrumental with some fuzzed guitars that kind of take away from it due to some rather noticeable static in both channels. I kinda see what they were going for but I dunno, it’s more annoying to me than it is complimentary. From there the guitars take over a bit and drums are also introduced and the song sort of settles into this dreamy sounding Shoegaze type of thing that creates quite a nice atmosphere and backdrop against which the vocals are set. Speaking of the vocals, I’d say they match up pretty well with the instrumental for better or worse. There’s some rather impressive melodies and when the moments present themselves they really get set loose and soar. Outside of those moments though, and much like the instrumental, things are bit…safe and sort of just find their comfort zone and stick to it. For what is essentially a Ballad though I have to say they did a pretty good job of making it sound interesting, and it’s also not really the sort of style I imagine most casuals like myself would really associate with jyujyu. Whether that is a positive or a negative is of course up to the listener.

“Hijitsu Zaisei Shōjo” ended up being partly what I expected coming in but also deviated from my expectations quite a bit when it came to the single’s b-side. Both songs are fairly enjoyable but aren’t without their flaws…in my opinion of course. I suppose if you asked for my honest assessment, I’d have to say that I enjoyed this a bit more than I thought that I might when I first sat down to write this review.

I think I’m still pretty far from becoming a jyujyu convert. This single is rather enjoyable though and I would certainly encourage you to check it out if anything I said in this article caught your attention. I’d also suggest their “Melian” album too for further research should you wish to delve deeper. As for me, we’ll see how the next release from this group hits my ears but for now I’m keeping an open mind.

Enjoy the content? Consider supporting the site on Patreon for as little as $1 a month.
Hako Recordsjyujyusingle review
0 comment
FacebookTwitterTumblrRedditEmail