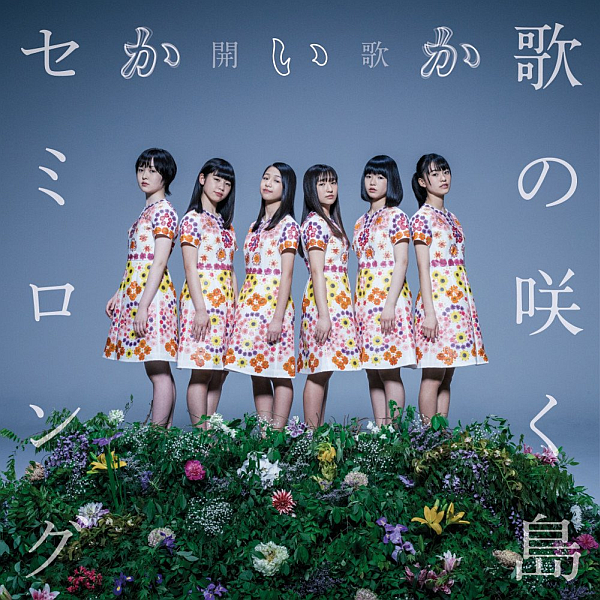 My thoughts on “Uta no Saku Shima / Semi Long”, the first single from caeca.

Have you guys ever just happened upon a tweet, link, YouTube video, etc and thought “Hey, maybe I should check this out”. I’ve found myself doing that quite a bit this year, partly due to me trying to unearth new music, and the results have been fairly positive up to this point I have to say. It’s because of all of this that I’m bringing today’s review to you actually, a review that might not have happened in previous years and that would have been a shame.

caeca, well it’s technically “kaika” if we’re going by a strict hiragana reading, are a pretty darn new group having only really come into existence back in the spring. Kind of fitting seeing as their name can be translated as “Blooming” in English. They’re a 6-piece who have been put together by Flying Penguin Records, a company who also brought you sora tob sakana and Pandamic for those of you familiar with those particular groups. Not a bad pedigree to have at all.

The concept of the group is to “deliver the vividly blooming singing voices of the members” which having done my research means the songs are going to be focusing heavily on intricate vocal melodies. Takahashi Hyouri from Owarikara appears to have written and composed both songs, with Sakurai Kenta of Maison book girl fame arranging the instrumentals. I don’t know about you guys, but that was enough to get my attention so hopefully some of you will stick around as I check this one out. I get the feeling that it’s probably going to be worth your while.

“Uta no Saku Shima” opens in a way that is fairly uncommon when it comes to Idol music. Most songs tend to lead with an instrumental that builds up a melody and maybe introduces the vocals as it goes along, eventually settling into what would be the fully rounded out song. Well, caeca do lead with melodies but they’re vocal melodies and they’re not backed by any instrumentals. You don’t miss it though, and there’s definitely something to be said about the voice being one of the best instruments of all because I’ll be damned if it doesn’t sound like there really is an instrumental anyway. An actual instrumental does eventually make an appearance of course, we’re not savages after all. Building up slowly with some synthesized drumbeats and light percussion before blooming into a fairly familiar syncopated arrangement of the aforementioned instruments. It is kept fairly light however, as the main attraction here is obviously supposed to be the vocals and why wouldn’t they be when they’re as great as they are? They’re also fairly catchy too so that’s another plus in my book and the layering of the different melodies is certainly not something you hear every day in this genre. Definitely consider checking this song out if you’re a fan of Maison book girl instrumentals or you’re just looking for something a bit different, a really good different.

The single’s other track is yet another instance of the Japanese loving a very short but literal song title. “Semi Long” is…well, it’s a semi-long song clocking in at about 3 minutes and 30 seconds. A little bit short by current standards, where 4 minutes or more seems to be the norm, but I like it. The last song was like 5 minutes anyway so all good. This track opts to open with an actual instrumental this time so a bit of variety there. It’s definitely not quite as light and in the background as on the previous track, with some fairly prominent pieces of percussion battling it out with the vocals for your attention this time. It still has a pretty heavy Maison book girl feel to it, which is understandable but I think there are enough differences in the structure and tone to give this song and the last one their own personalities. The vocal melodies aren’t quite as strong here I feel, though they are still very pleasant as they ring out through your headphones. It’s a more lowkey song in general though so I get what they’re going for, and it definitely gives each of the songs featured here their own distinct tone. The instrumental certainly seems like it’s the main attraction here at first, but once again there’s a lot of depth and hooks in the lyrics and vocal harmonies. Definitely rewarding repeated listens with this track.

For a single that in years past I would have probably skipped over and from a group whose image definitely isn’t my usual interest, I have to say that “Uta no Saku Shima / Semi Long” kinda blew me away a bit. The music feels fresh to the ears and what they’re doing with the vocal harmonies is as impressive as it is ambitious. They also nailed the instrumentals too, which I imagine probably wasn’t the easiest thing to do given the intricacies of the vocal work.

Yeah, I’ll happily take some more caeca songs please. As soon as they want to release them, which I hope won’t mean too long of a wait. They are still really new though so we’ll see how it goes. I would encourage anyone who likes sora tob sakana, or Maison book girl especially to check this single out. It might not be the most conventional thing you listen to all year, but I can promise you it’ll be one of the most interesting. Drop your preconceptions, approach this CD with an open mind and I think you’ll be pleasantly surprised.

Enjoy the content? Consider supporting the site on Patreon for as little as $1 a month.
caecasingle reviewt-palette
0 comment
FacebookTwitterTumblrRedditEmail