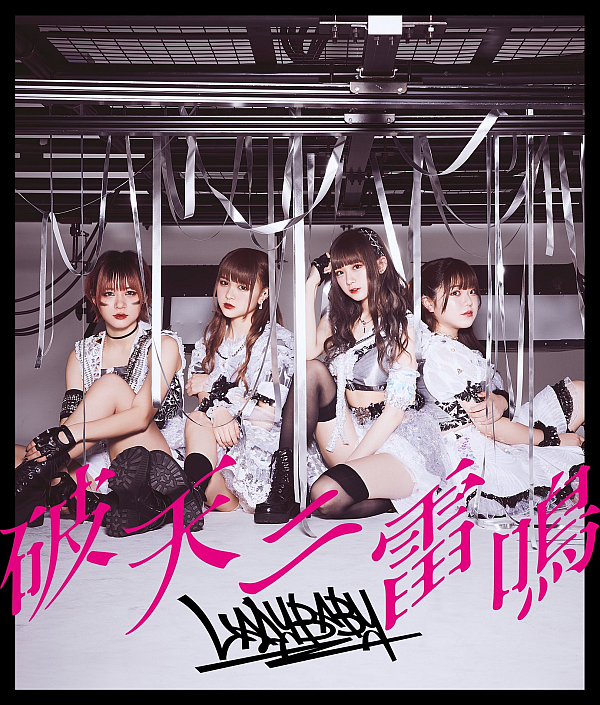 My thoughts on “Haten ni Raimei”, the latest single from LADYBABY.

So I bet none of you expected to see this review from me, right? I’m trying to remember if I’ve ever given the group in question so much as a passing mention on the site before and I’m drawing a blank. What can I say, I’m a busy guy and there’s usually always something I’m more interested in writing about. Not that I’m sure it matters much, seeing as how the group whose release I’m going to be reviewing today are probably one of the most well known groups in the Western fandom.

I am of course talking about LADYBABY. The 4-piece Idol group who as I mentioned are pretty well known and I’d even go as far as to say pretty darn popular in the West. I mean, they just performed in Italy a few months ago and in America even more recently. They’re not really a group that I ever connected with personally, though I’ve heard a few songs over the years and they were pretty decent from what I can remember. You could say I’m a super casual admirer I suppose.

To be honest, I’m not really sure why I picked this particular release out of the stack of stuff that came out recently to write about. On some level I’m interested to hear how LADYBABY sound these days and I guess I also wanted to continue the ambition for this year of writing about stuff I might have otherwise skipped over. I’m not totally sure what to expect out of this single but if this terrible intro hasn’t made you click away yet I would appreciate it if you stuck around to listen to me try to articulate some thoughts on it.

Whenever I think of what a LADYBABY song, from the more recent incarnation anyway, should typically sound like my mind imagines a fairly “heavy” Metal style instrumental and a decent amount of harsh vocals to compliment some more calmer melodies. Title track “Haten ni Raimei” definitely sets its instrumental off down that particular path with a heavily distorted guitar riff just about managing to make its presence known before one Arima Emily unleashes those now signature harsh vocals of hers and the song really gets going. The instrumental briefly takes on a bit of a Digital vibe, not too dissimilar to something you might hear out of PassCode, but they don’t really do too much with it after that so it ends up feeling a little random. For the most part we stick with the very dense, bass heavy instrumental with the aforementioned guitars and some thundering drumbeats. They do tone it down a bit when there’s a main verse or during the bridge towards the end to be fair, where the song becomes more of a showcase of the various vocal talents that LADYBABY possess. Emily of course is the most unique but everyone contributes to some powerful melodies and there’s even a bit of Rap sprinkled in here and there. A really enjoyable song that you wouldn’t be unhappy to hear from most female fronted J-Metal bands, at least I wouldn’t be anyway.

The single’s second track and first b-side “God’s Not” opts to flip the script and take things in a completely different direction than the title track did. By that I mean that’s a song that’s pretty much the exact opposite of “Haten ni Raimei” in both musical style and tone. This one is pretty much a Ballad and while not exactly my favorite style of Idol song there’s nothing really wrong with it. A fairly pleasant drumbeat keeps things moving along at a steady pace, accompanied by fairly muted, slightly fuzzed guitars. It all makes for a rather nice, calming atmosphere that creates a stark contrast when juxtaposed with the a-side. Hardly reinventing there wheel here but the instrumental does its job well enough. On the vocal side of things it’s a bit of a mixed bag. On the one hand you do get some rather lovely solo work from the girls but when they all try to harmonize together the wheels do start to come off a bit. Maybe it’s just me but those parts in particular stood out as being noticeably “off” in my opinion. Maybe this is a case where smoothing things out in post might have been a good call, you tell me. LADYBABY aren’t going to win any awards for innovation or originality with this song, but outside of a few questionable vocal moments it’s fine for what it is I suppose..

LADYBABY round out this single with “LB4 Future”. It’s a rather interesting track in that the instrumental is taken from their 2015 song “Beard-chan Robot” but with all new lyrics that have been redone to fit the group’s current line-up a bit better. Can’t really think of too many other instances of this sort of thing happening honestly, it’s usually another artist ripping off a beat or melody. The opening monologue is the first obvious change, being delivered in rather hoakey English instead of the original version’s Japanese. The instrumental is pretty much identical as best I can tell, though I’m not overly familiar with the original I must admit. LADYBABY at the time were selling Heavy Metal infused with Bubblegum Pop and that’s pretty much what the instrumental still is so if you loved it before you’ll probably still love it now. Vocally is where the biggest changes are of course, though they’ve retained much of the original structuring which makes sense considering the almost copy and paste nature of the instrumental. I guess to me this new version feels more authentic, and by that I mean it sounds like this is a song by LADYBABY, not LADYBABY trying to do a song in the style of X. Emily’s harsh vocals play a big part in this and I think she’s much better than what’s she’s replacing. On the whole though, the vocals sound a lot more well rounded which is likely due at least in part to simply more age and experience being behind them than the version from 3 years ago. Still pretty cheesy, but a bit more mature too.

As an admittedly very casual LADYBABY listener, this single was fairly enjoyable for me. Title track “Haten ni Raimei” is the standout of the three as far as I’m concerned, and by a fairly wide margin. “God’s Not” being a fairly cookie cutter Ballad doesn’t scream “Must listen” to me and “LB4 Future” while fun is a little too silly still for my personal taste. Definitely didn’t hate anything I heard though, so a pretty positive experience all in.

I doubt my opinion of this single is going to influence anyone’s opinion on LADYBABY in any meaningful way, and nor should it. It might influence some peoples’ opinion on me though but I’ll cope somehow I’m sure. It was just nice to actually sit down and give LADYBABY some real attention for a change and if I’m honest, I’m kinda a bit more interested to hear what they’re going to release next. That’s sort of a win there, right?

Enjoy the content? Consider supporting the site on Patreon for as little as $1 a month.
ladybabyRAIMEI RECORDSsingle review
0 comment
FacebookTwitterTumblrRedditEmail