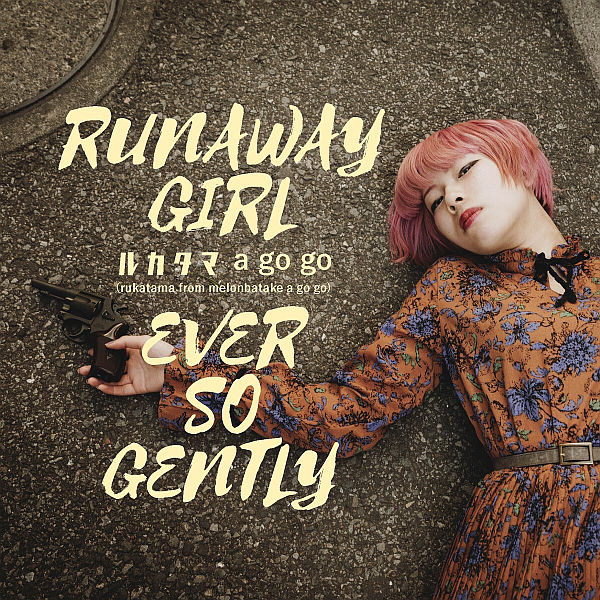 My thoughts on “RUNAWAY GIRL / EVER SO GENTLY”, a single from Melon Batake a go go’s Rukatama.

It feels like I don’t really cover solo idols that much on the site and I do feel kinda bad about it. That being said, they’re not exactly the most common of creatures and especially in the parts of the scene that I prefer to operate in. The reasons for this are many and also fairly logical but there’s just something admirable about an idol doing their own thing and trying to carve out their own little slice of success. Man I’m getting soft in my old age, but yeah solo idols are pretty cool

Which brings us to the subject of today’s review. Many of you may know Tamaki Ruka, or Rukatama, from her work with Melon Batake a go go where she’s one of the main vocalists. You may also be familiar with her fantastic song “Mother Of Pearl” and its associated single. I know that the MV for that song certainly opened a lot of eyes and ears when it came out. If you’re not yet familiar with Rukatama or Melon Batake a go go then stick around for the rest of the review. You might just learn something.

“RUNAWAY GIRL / EVER SO GENTLY” is Rukatama’s second single under the Rukatama a go go moniker though it’s going to be her first that is being widely distributed through the usual channels. The title track is a cover of a song by Japanese Rock band ROGUE, while I believe the b-side is an original. The other members of Melon Batake play minor supporting roles which is cool and also kind of explains the name for this project. I have a pretty decent idea of what to expect and I’m excited about it so let’s cut the chit-chat and get on with the review.

As I previously mentioned, the lead track on this single “RUNAWAY GIRL” is actually a cover of a song originally written by the Japanese band ROGUE. Rukatama’s version of the song definitely keeps the spirit of the original, while also putting a slightly more modern spin on the track. The instrumental retains its very punchy drumbeat along with the warm and rather rhythmic guitar that gives a lot of body to the song as a whole. Obviously modern recording makes for a much cleaner sound but this iteration also makes use of synthesizer to accent the drumming which I thought was an interesting touch and I have to say that it does work rather well. There’s also some much more subtle synthesizer work throughout but it doesn’t really try to be the focal point outside of a few aforementioned drum dominant parts. Vocally this song gives you pretty what you’d expect if you’re at all familiar with Rukatama’s previous solo work or her work with Melon Batake. Rich, low notes are definitely the defining characteristic though there’s an edge injected into the lyrics at times and a little bit of attitude bubbles to the surface. It’s actually fairly in keeping with the original and Rukatama’s voice works well with this style and there’s even a little help from her friends in places if you listen closely enough. A catchy tune that somehow managed to be both serious and brash at the same time. Well worth checking out I think.

We go original for the single’s second track, as best as I can tell anyway. It’s possible that “EVER SO GENTLY” has been re-purposed from somewhere else but I couldn’t find it so we’ll assume original unless otherwise stated. A pretty interesting track that starts off with what I suppose could be described as a fairly slow build. About two thirds of the song sees Rukatama deliver some very smooth vocals that are quite pleasing to the ear. They are slightly at odds with the song’s galloping drumbeat but I feel like they cut through it very well and we even get a bit more edge to them during the thrashier guitar parts. The final third of the song however sees things get put into overdrive, with the tempo being cranked way up and you realize that things have been more at a canter than a gallop up until now. I love the energy that the instrumental injects into the song for this part, it’s almost unexpected but it worked out so well and the way they’ve done it is so simple but effective. Rukatama’s vocals also rise to the occasion, though they’re not quite running away like the instrumental. There’s definitely a change in mood though, with the slight edge I mentioned earlier taking on a much more prominent role now. I’m pretty sure this song also features a bit of back vocal from some familiar faces but don’t mind me. It takes a little while to get going for sure but if you stick around you’re definitely rewarded with a really fun and energetic sprint to the finish line.

If you’re a fan of Melon Batake already then nothing you’ve heard on this single should come as much of a surprise to you. Rukatama is very much a key part of Melon’s distinct vocal style but it’s pretty cool that they’re letting her do her own thing from time to time as well. If all of this is new to you then you could certainly do a lot worse than checking out Rukatama’s song “Mother Of Pearl” along with all of her work with Melon Batake as well. Heck, check out the other members’ solo projects too while you’re at it.

I don’t know about you guys but I want more music from Rukatama. I think her voice is awesome and it’s well suited to a whole bunch of cool genres of music. I get that Melon Batake is likely going to be the main focus, especially in the immediate future with all they’ve got going on in the next few months. That being said, I hope it won’t be too long before we get a new song or two from Rukatama. I also wouldn’t mind something new from GARUDA either, just saying.

Enjoy the content? Consider supporting the site on Patreon for as little as $1 a month.
Nippon ColumbiaRukatama a go gosingle review
0 comment
FacebookTwitterTumblrRedditEmail