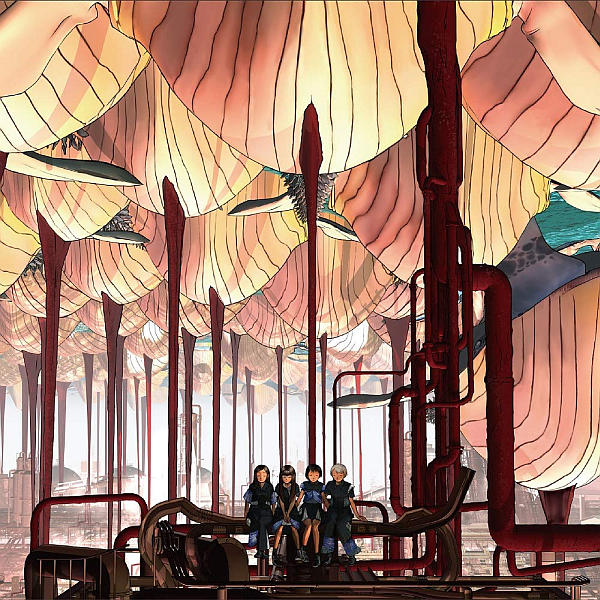 My thoughts on “SOUP”, the latest single from Maison book girl.

I feel like I say something along these lines every time I review a release for this particular group, but I guess it remains true so here goes. This week I’m going to be taking a look at what I’m sure will be a somewhat unconventional selection of songs by Idol standards, by a group people seem to either love or…not at all care for. I don’t think I’ve ever seen a group or their music divide opinion quite as much as this particular one does, so that’s pretty interesting in and of itself. Hopefully you’ll stick around to hear my thoughts no matter what your opinion might be though.

The group in question is of course Maison book girl. I think they get a somewhat unfair time of things, especially in the last year or so because they really have added a lot more conventional elements to their music than when the group first started out. I’m even saying this as someone who didn’t really “get it” for a long time too. Far be it from me to tell people what to like or not like, but if you haven’t checked in on Maison book girl in the past year or so I would highly encourage you to revisit them and see how you feel about the recent output.

Anyway, onto what I’m going to be reviewing today. “SOUP” is the latest single from Maison book girl, and the first release to follow their very ambitious concept album “yume” (review here) that came out at the tail end of 2018. Interestingly there appears to be 3 songs here and no spoken word track like is usually the case on these releases. We’ll get into that in a minute though. While I do kinda have a rough idea of what to expect here, Maison book girl do like to throw a curve ball every now and then so I guess the best way to find out is to hit play and get writing.

There’s an instant sense of familiarity when the synthesized percussion loops kick in to open up lead track “Kujira kōjō”. Not in a bad or “I’ve heard this exact thing before” kind of way but more of a “Yeah, this is definitely Maison book girl” sort of thing. It’s nice and bright, and the strumming of an acoustic guitar gives the instrumental a bit more depth and a nice richness that the synthetic nature of its other components wouldn’t have been able to provide on their own. There’s no drastic change in instrumental over the course of the song but the tempo does increase at the appropriate times and I never felt like it was lacking energy at any point. Speaking of energy, the vocals have quite a lot going in that regard too. More noticeably in the song’s rather catchy chorus but even when they drift along a bit more sedately for the verses there’s still an underlying current of energy throughout. A pretty fun song that might not be entirely conventional but still well worth a listen in my opinion.

First b-side “Nagai Yoru ga Akete” starts off positively “normal” with some nice piano accompanying some vocals. This is a Maison book girl song though, and if it was just that for the song’s near five and a half minute runtime that would be pretty boring. Instead they transition into an instrumental that is part dramatic, part fanciful. Kind of like a fairytale movie soundtrack vibe, in my opinion anyway. It even sounds like the film reel is malfunctioning towards the end of the track so I’m sticking with my movie assessment. Once again, pretty different to your usual Idol stuff but if you come in with an open mind you’ll hopefully enjoy the instrumental they’ve put together here. The vocals shouldn’t have any real complaints I’d imagine. They’re very clean, the chorus is catchy in the usual Maison book girl way and the instrumental does step aside for the most part to let the girls do their thing. Some really nice individual performances on this track along with some lovely melodies too. Pretty darn good as far as b-sides go.

Well, I have to admit I was a little scared when I saw that second b-side and final track “Mangetsu no Yoru ni” was clocking in a just shy of 7 minutes in length. Idol songs that go that long generally aren’t that great in my opinion so I guess it’s good(?) that isn’t really a song per se. Yep you guessed it, it’s your standard spoken word deal that Maison book girl did decide to include here despite my assumption that they wouldn’t. My Japanese still isn’t good enough to get the full effect from the words being spoken but the backing track is pretty interesting. Lots of field recording type stuff, water sound effects of varying types and some pretty sad sounding piano that pretty much serves as the backbone to the whole thing. I’m not super into this sort of stuff personally but it’s part of the gimmick and it’s totally fine as a b-side or album interlude. Just don’t go making this sort of thing the lead track and I’m happy to go along with it if it’s for lore or some such similar purpose.

While I might still be trying to figure out exactly where soup comes into this single what I do know is that Maison book girl have delivered yet more Maison book girl songs. Whether that’s a good thing or a bad thing depends totally on your opinion of what they usually produce. If you’re a fan then I imagine you’ll enjoy this single but if they haven’t grabbed you with anything they’ve put out in the last 12 months then this is likely going to elicit a similar reaction.

I rather enjoyed the two actual songs we got here and yeah, the spoken word meets field recording gimmick was fine too I suppose. Maison book girl seem to be keeping up the momentum that the release of their “yume” album provided them and barring any unforeseen issues they look set to have very strong 2019. I believe their next single releases in a little under two months time, so we don’t even have too long to wait to see what else the group have in store for us this year. I’m thinking something to do with a sandwich for the next one. How about you guys?

Enjoy the content? Consider supporting the site on Patreon for as little as $1 a month.
maison book girlpony canyonsingle review
0 comment
FacebookTwitterTumblrRedditEmail