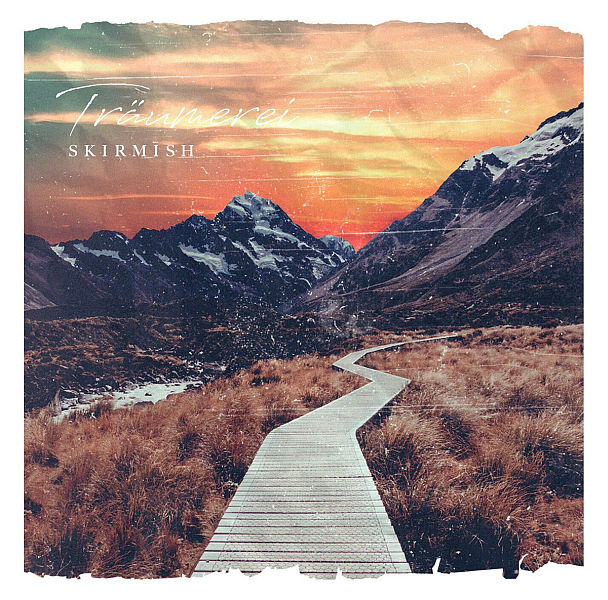 My thoughts on “Träumerei”, the debut mini-album from SKIRMISH.

Yep, it’s another one of these. I’m still honestly not sure how enjoyable/interesting it is for you guys to read me bungle my way through reviewing a group/genre of music that I’m not familiar/comfortable with. I’m having a decent amount of fun with it thus far though so I suppose I’ll keep doing them until that either stops being the case or the pitchfork armed hate mob comes for me. I’ve also found some cool music that I might otherwise not have listened to, so that’s nice.

This time out I’m taking a look at SKIRMISH, a group that I know pretty much next to nothing about. All I really know is that they’ve been around for about 6 months or so, one of the members is literally called “baby” and I might have seen them on a random taiban when I was in Japan last year. My memory is pretty fuzzy on that last part though and they were probably so new at the time that any impression they made would (hopefully) be very unfair to bring up now that the group is a bit more established.

Which brings us on to the release itself. “Träumerei” is as best I can tell SKIRMISH’s first official release. The title is German for “daydreaming” if my Google skills aren’t too rusty and there’s 5 songs on the mini-album, with the title track having had a MV release at the tail end of last year. Apart from that I pretty much have no idea what to expect or any real preconceived notion of what these songs are going to sound like. That seems to be a theme on the site lately so let’s get into the review and see what we’ve got here.

One would be forgiven for thinking that title track “Träumerei” might perhaps take on a fairly soft, even…dream-like vibe given its title but that’s not the case at all. With an opening guitar riff that’s almost a little bit too reminiscent of Yanakoto Sotto Mute, this song would seem to establish itself pretty squarely in the Alternative Rock genre. I say seem because it ends up taking on a bit of a Punk Rock influence, particularly in the vocals, as it builds up some momentum. It’s a pretty interesting combination of genres but they play off of each other rather well with the Alt Rock influences delivering some pretty nice guitar riffs while the Punk side of things injects a bit of attitude and roughs up the edges a little. Vocally things also sound somewhat reminiscent of Yanamute at times, mostly depending on who is singing, but on the whole very much that sort of style so Yanamute fans might want to give this song a try. Though I will say that there are times where the vocals sound rather…Lo-Fi for some reason and I’m not sure why that is. I’m guessing it’s a production hiccup maybe but it’s kinda noticeable so I thought I’d mention it. Apart from that minor quibble I actually really like this song. Off to a good start here.

“Way of life” switches things up a bit and instead opts for a more Indie Rock approach to its instrumental. By that I mean there’s a good amount of lightly fuzzed up guitar, which gives the song much of its bulk, accompanied by some light synthesizer which is mostly there to add a sparkle or jingle to break things up a little. It’s not the most original instrumental in the world (though most aren’t by now I suppose) but there’s some nice guitar riffs and it’s pretty well structured and put together so it’s not like I’m faulting the technique or anything like that. It’s a song that should have some pretty broad appeal, especially when you add in the vocals that kinda sound like they wouldn’t be out of place on some kind of anime theme song or other such tie-up type deal. No weirdly Lo-Fi moments on this one so I’m not really sure what happened on the previous song, though I have to say that I did find “Träumerei” to have the more interesting lyrics and a few catchier hooks than are on offer here. Like I said though, as far as having a song that can appeal to a lot of people I think SKIRMISH probably have that here. I would have preferred something a bit less cookie cutter but I am but one man with an opinion.

“Platinum” marks the mid-point of the release and also injects some actual piano into the mix to further expand SKIRMISH’s repertoire. This makes for a song that sits somewhere in the middle of the spectrum between Ballad and Piano Rock. That probably sounds kinda weird but I can’t think of a better way to describe this one. The instrumental once again opts for some standout guitar riffs as the highlights, accompanied by the aforementioned piano that almost reminds me of the sort of thing you’d hear from an anime theme like 10 years ago (man, I’m old) or so. The Ballad part comes in during the song’s less powerful and energetic moments, and is driven quite heavily by the vocals. The guitars, drums and all that other stuff just stops and you’re left with the vocals accompanied by the piano in what are several calmer moments throughout the song. Speaking of which, the vocals on this song are once again pretty solid all around, and I also get a bit of a throwback anime vibe here too but it could just be me. Though perhaps not the biggest ear worm on first listen, after a few spins this one should definitely start to get its hooks into you.

We stray from the beaten path and fall into “Deep Sea” which definitely doesn’t sound, at least initially anyway, like anything else we’ve heard on this mini-album thus far. After a static charged start the song opens into a rather Downtempo, very Ambient synthesizer arrangement that I would have personally been pretty okay with for the entirety of the song. I guess SKIRMISH had other ideas though and the song eventually builds into a another Piano accompanied Rock affair though this time with quite a bit of fuzz and distortion added to the mix. Taking elements of several previous songs and combining them together would be a fair assessment of what’s happening here and to be fair it does work rather well and I certainly wasn’t at all bored while listening to it. The vocals are good too, though for me personally I wouldn’t have minded something a little bit more catchy just to make the song stand out a bit more. Great performances from the members here but yeah, could have maybe added something to give the song something extra. I enjoy this one, don’t get me wrong but part of me does kinda wish they’d stuck with the direction it started out heading in instead.

“Milestone” closes the mini-album out and in pretty impressive fashion I must say. The opening synthesizer melody that might be slightly and kinda unfairly overshadowed by the Rock component of the instrumental is just simple but incredibly effective. It creates a nice hook that catches the ear and then we’re off to the races as they say. The vocals take the driver’s seat for a good portion of the song which is nice and I definitely enjoyed how they were structured and flowed, kind of a mild Pop Punk influence creeping in at time which was cool. Still getting a bit of an anime vibe every so often but again it might just be me. Thankfully the synth melody from the beginning of the song does stick around, though it is used sparingly which I think is probably for the best in the end. Outside of that we get another enjoyable Rock instrumental with some cool riffage that at times gets obscured by drums and a wall of fuzz for some reason. That’s a minor gripe though as I do genuinely think this song is rather good and I would recommend it and/or the title track to anyone looking to check SKIRMISH out.

For a first release from what is still a very new group, “Träumerei” and SKIRMISH both show a lot of promise. There are moments here that feel a bit samey which can be looked at as a bad thing or good that the group has a defined sound already. Nothing here is all that “bad” outside maybe that and a production choice or two. It’s pretty impressive for a debut release honestly.

That being said, I do hope that SKIRMISH explore some of the other themes they touched on in this release at some point. It would definitely add a bit more variety to their sound which for me is something this release lacks a bit. That being said I’ll be keeping tabs on them from now on and I’m definitely looking forward to hearing how things develop between now and their next release. I feel like there’s a lot of potential here.

Enjoy the content? Consider supporting the site on Patreon for as little as $1 a month.
indieMini-Album ReviewSKIRMISH
0 comment
FacebookTwitterTumblrRedditEmail