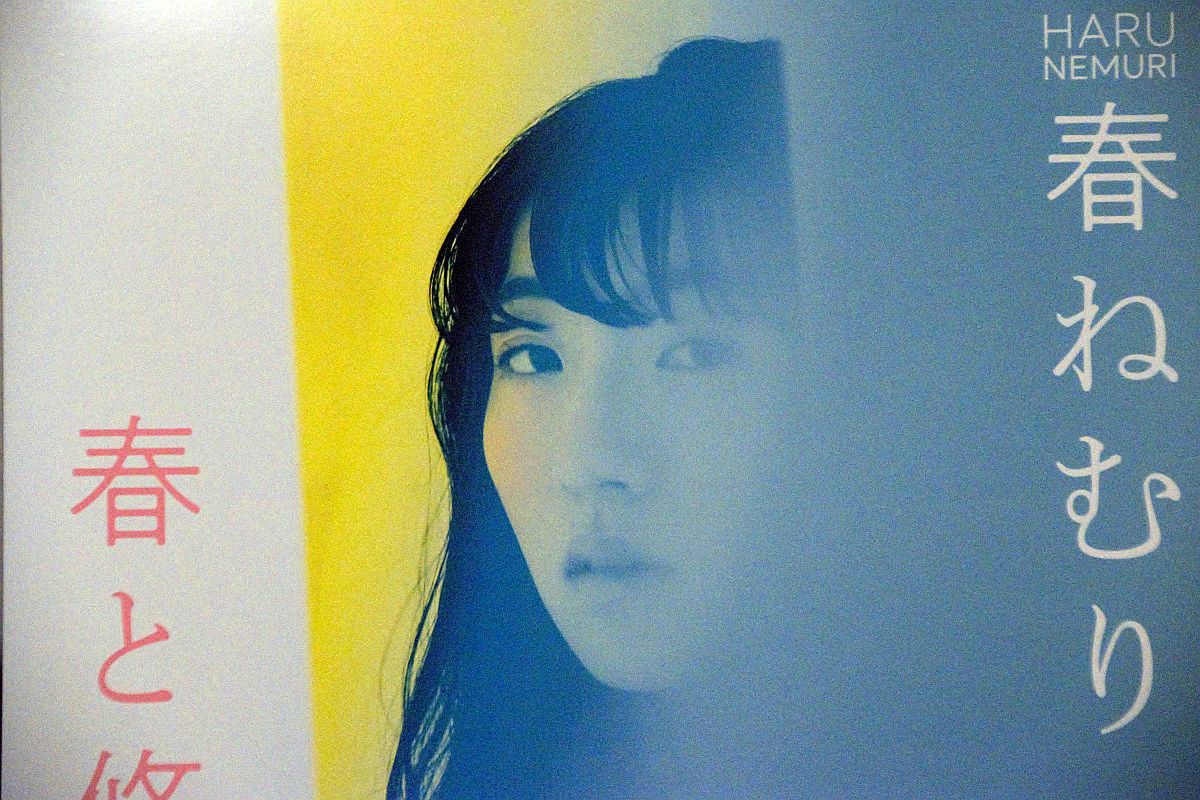 Taking a look at the upcoming Specific Recordings release of Haru Nemuri’s “Haru to Shura” on vinyl.

For the second time this week I come to you all with something a bit different than what you’d usually expect to see posted on the site. Another surprise I guess you could say, because who doesn’t love a surprise really? I know I do, and I was just as surprised to learn of this album’s vinyl pressing as I was to hear that the young lady who wrote and produced it would be touring Europe this summer. More on that in a bit here though.

If the title hasn’t already given it away, today I’m going to be writing a bit about “Haru to Shura” which is the debut album from Yokohama’s own Haru Nemuri. Just like NECRONOMIDOL, she’s teaming up with the wonderful Specific Recordings from Metz, France for this vinyl pressing and they were once again very kind to both offer and send me through a promo copy. I know I’m mainly running a website that focuses on Idol music but I like to do a roundup of my favorite non-Idol Japanese releases every quarter, so hopefully this product review won’t be too off script for my regular readers.

I don’t believe I’ve featured Haru Nemuri on the site before though so a bit of an introduction is in order. The singer from Yokohama has been generating quite a bit of buzz for herself over the last year or so with her raw and very in your face blend of a host of genres including Alternative Rock, Post Rock, Spoken Word, Rap, Post Hardcore and of course J-Pop. Think along the lines of Midori or Goto Mariko, whom she recently toured Asia with as a matter of fact. Her enthusiasm for her craft is palpable both in the studio and on stage, where despite the unfiltered nature of her songs their composition remains incredibly precise and well thought out. Though perhaps a little too experimental for some on first impression, you’ll quickly find yourself coming around to Haru Nemuri’s genius as this album plays out.

Like my previous article, I’ll be focusing mainly on the product here. Mostly giving my impressions on the packaging, the very interesting colorway that they chose to press on and of course how the record actually sounds when played. Ideally I would review the whole album but I’m not sure anything I could write would do it justice. Streaming links will be available however and I would encourage you all to check out “Haru to Shura” because it’s really quite fantastic. I’ve been really curious to hear how the album will sound on vinyl, because it definitely seems like it should be a good fit at least. I’m very hopeful for this one and I don’t think I’ll be disappointed.

Once again, I’d just like to take a moment to thank Specific Recordings for providing me this promo copy. I appreciate everything they’re doing and they’ve made it very clear in the past few days that they appreciate what I’m doing too. Usual disclaimers and all that fun stuff but all I’ve been provided with are the record and a press release. Everything else written here is just my opinion and you all know I love having a few of those. Let’s check this record out. 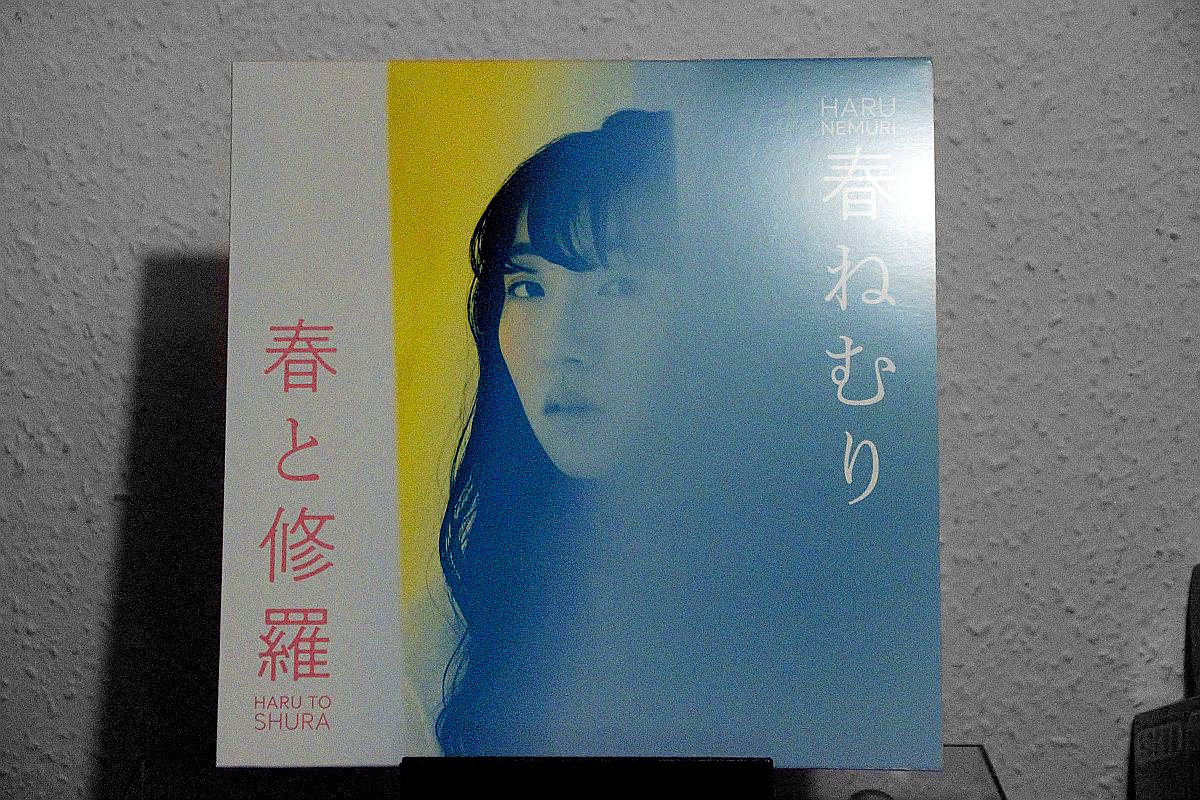 The cover for the vinyl version of “Haru to Shura” mirrors its CD release because really, why wouldn’t you when it looks that good already. Haru Nemuri is the focal point of the composition, appearing semi-transparent in the blue and yellow hues that provide the front of the otherwise white jacket with much of its color. Her name and the album’s title flank her, in white and pink text respectively and in both English and Japanese. Given the musical content of the album, you could say that this cover is a little deceptive as its rather clean, contemporary design belies the raw, distorted genius contained within. Though I like to think of it as a nod to the record’s precision and intricacy. One to surprise your unsuspecting friends with at the very least. 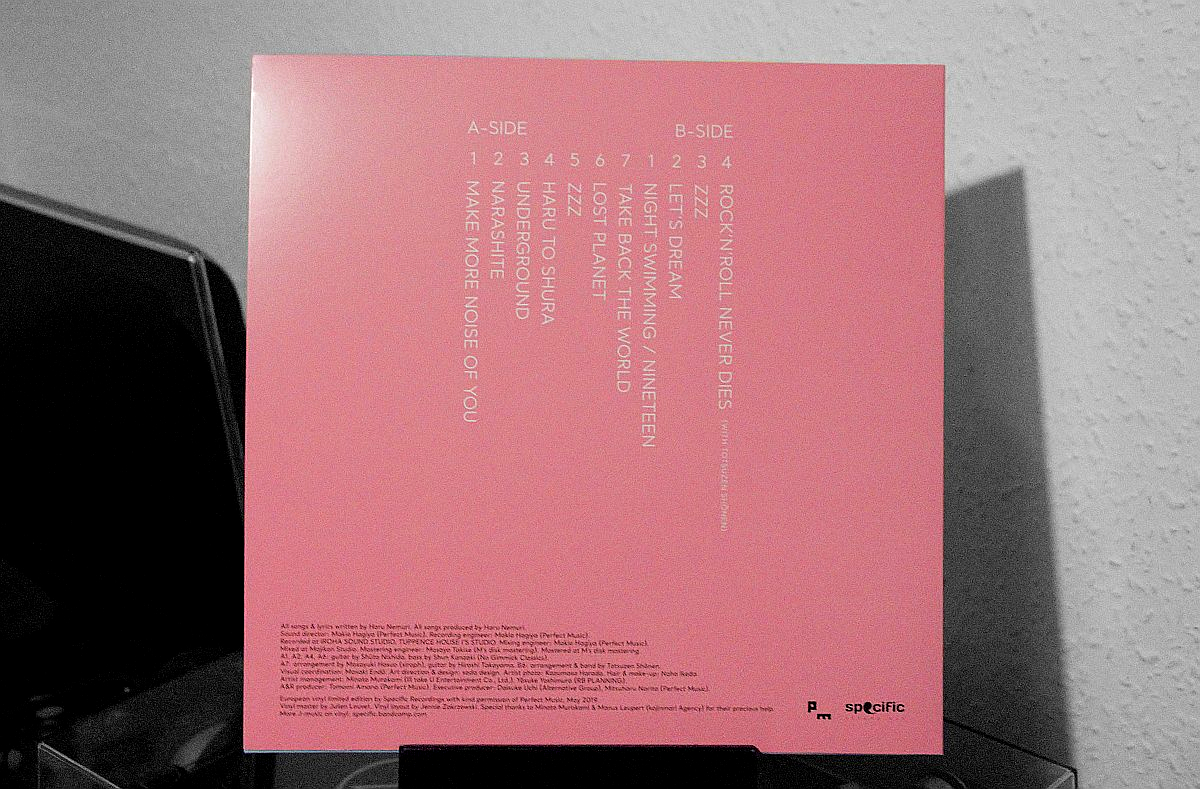 The back of the jacket keeps things nice and simple. Featuring a solid pink background upon which important information like the tracklist and album credits are displayed, in white text for the former and black for the latter. I think it compliments the front cover nicely and continues the very clean, contemporary theme. I must admit that the orientation of the track listing and how the listings for each side run together makes it a little hard to read, at least for me anyway. I’m far from a graphic design expert though so make of that opinion what you will. I’m not a fan of overly elaborate back covers personally so that said, I definitely appreciate that they’ve kept it simple and fairly easy to pick out the information that I’m looking for when browsing for records in a store. 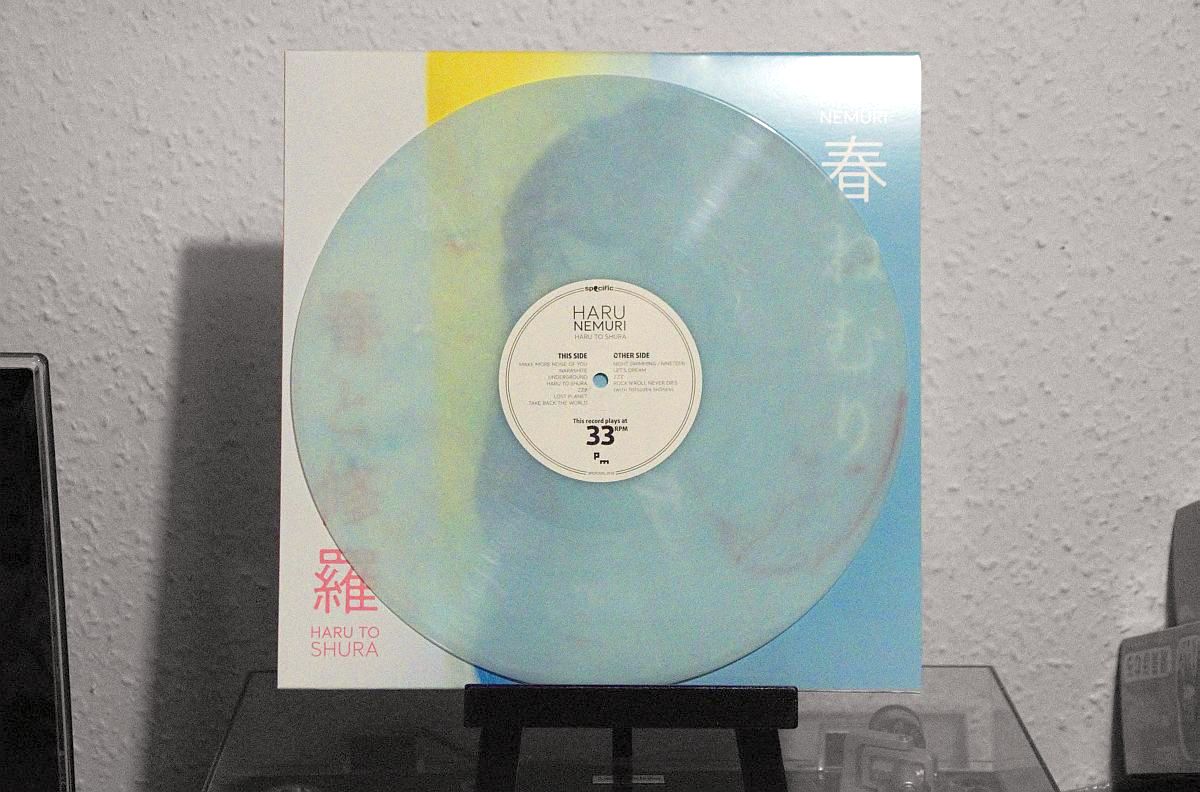 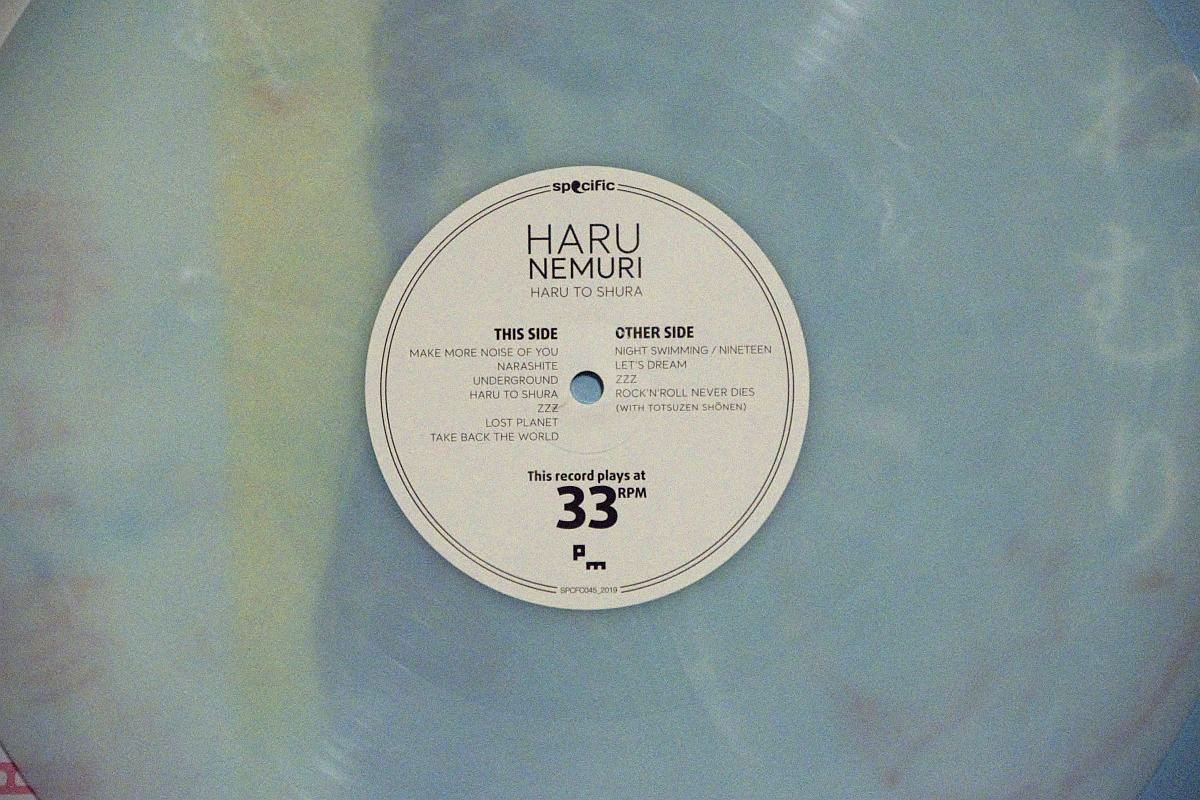 The record itself is described as being pressed on “turquoise and white” 180g vinyl and what a lovely color combination that is. It looks even better in person than my less than ideal lighting situation might suggest too. Interestingly, my copy also appears to have a couple of red swirls through it so I’m not sure if that’s true for all of the records or maybe I got a little something extra on mine. The labels are in the usual Specific Recordings style, very clean with the album information on the a-side and the Specific logo featuring on the b-side. It’s a great looking record and very much in keeping with the overall design of the rest of the packaging. 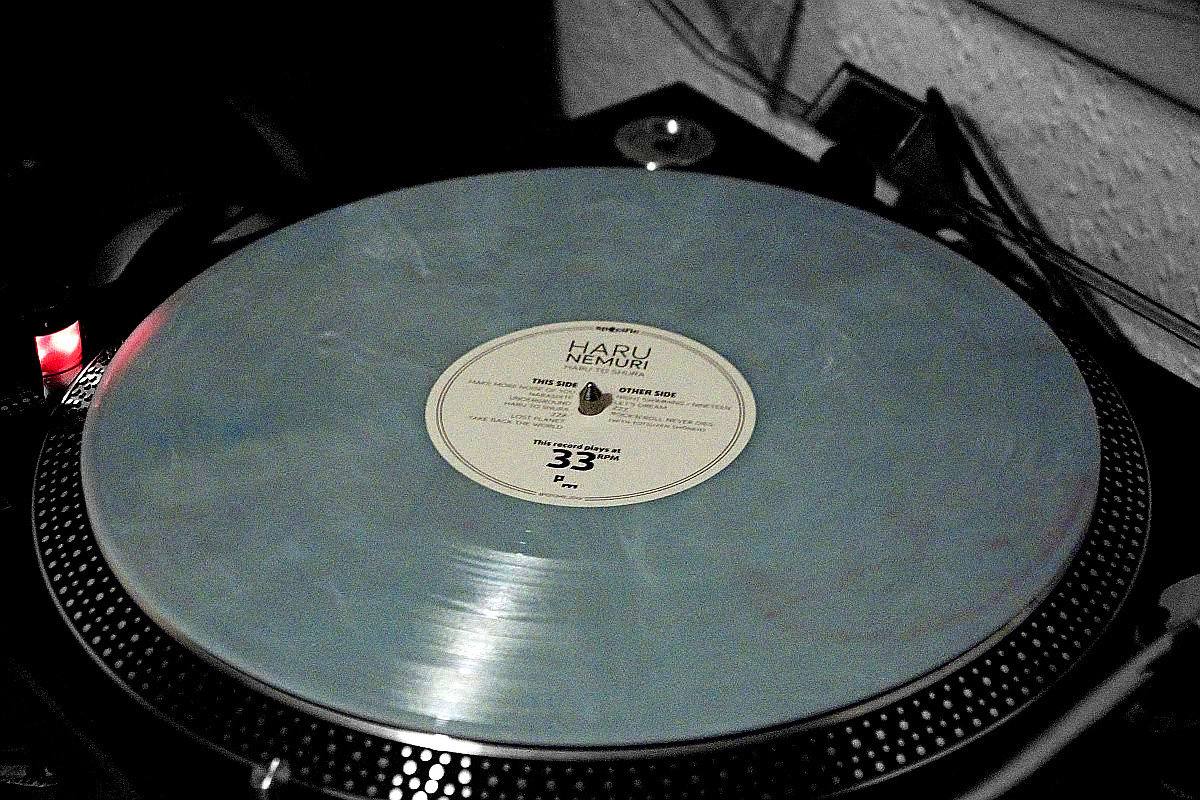 I suppose all that really leaves to be covered is how the record itself plays. Well, through my very modest setup of an Audio Technica LP120 outputting to a FiiO E11K headphone amplifier I think the record sounds great. Considering the wide range of musical genres incorporated into the album it’s no easy task to make everything sound as it should but they did a fantastic job here. The distortion is warm, full and definitely not overdone, the spoken word and clean vocals are smooth and rich and the plethora of other instruments and production techniques are mastered wonderfully. If you enjoyed this album on CD then you’re definitely going to love the vinyl edition, a lot of care went into it and it shows.

So there you have it, a first (I haven’t seen any others yet anyway) look at “Haru to Shura” by Haru Nemuri on vinyl, once again courtesy of the awesome folks from Specific Recordings. You can pick this record up starting April 26th on the Specific Recordings Bandcamp. No pre-orders unfortunately and the record is limited to 500 copies. I’m sure there’s going to be a lot of interest in this one so make sure you set a reminder. You’ll definitely regret it if you miss picking this up.

You can follow Specific Recordings on Twitter @SpcfcRecordings for more news on upcoming vinyl goodness. Be sure to follow Haru Nemuri on Twitter too @haru_nemuri if you don’t already do so. Also make sure to catch her on her extensive European tour this summer, details of which can be found on her website here.