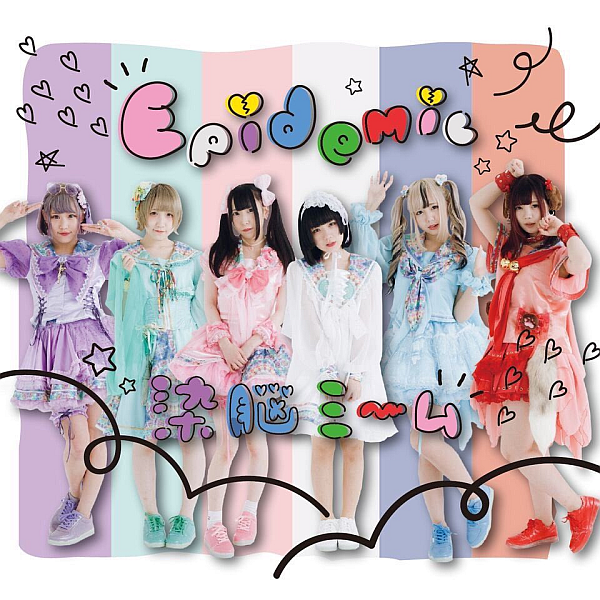 My thoughts on “Epidemic”, the debut mini-album from Sennou Meme.

Well then, I did say that I would be trying to inject a bit more variety into these reviews in 2019 and that’s exactly I’m doing this week actually. Of course, it helps that most of the other groups I usually cover are either disbanding or losing members left right and center so I need to diversify to keep this gravy train rolli…ahem. Anyway, I’m looking forward to introducing you all to a group you might have heard of in passing but probably haven’t taken the time to look into that closely. Seriously girls, can I can get an MV to help me out here?

The group in question is Sennou Meme. Yes their name is literally “Dying Meme” or “Brainwashing Meme”…or something to that effect, how MEGA LOLZ is that kids? They’re a 6…oh wait make that 5 because two of them already left and one recently joined as a replacement, group that have been active for maybe 6 months or so at this point. Their gimmick revolves around viruses, illness and other such things but it’s all wrapped up in a cutesy, sweet package so it’s nice and friendly. I don’t know if they’re officially “Yami-kawaii” or not but they do have that sort vibe to them as evidenced by their make-up and costuming.

“Epidemic” is the group’s first mini-album and also their first release in general. They’re produced by GEEKCANDY who is probably more well known for their work in fashion and jewellery but they’re now trying their hand at producing an Idol group. The mini-album has 6 tracks which is pretty decent for a debut honestly so we should get a pretty good idea of what the group is about. Well, I have seen them live once before but they were still pretty green then, so even for me this is going to be pretty interesting to check out. Let’s do that now, shall we?

Kicking things off is the self-titled “Sennou Meme”. More of a walk-on track than an actually song in all honesty but perhaps giving a bit of a preview of things to come. The instrumental leans heavily on synthesizers and reptitive drumbeats, taking on an almost Chiptune quality a times. The build on this track is actually quite good, which would make sense I suppose given that it’s supposed to get the crowd excited for the impending performance. Some nice layering of instruments can go a long way, as evidenced here. We do actually get a bit of vocal work on here too, mostly just the members introducing themselves in a fairly cute sounding way. Then the group’s name is repeated over and over, just in case you might accidentally forget it. The way they do it is actually rather catchy to be fair too. Not bad as far as first impressions go.

“Pandemic Generation” eases up on the synthesizer a bit and replaces Chiptune for something with a bit more of a fantastical feel to it. That’s the impression that the song’s occasional synthetic string section and piano leave me with anyway, a sort of fairytale veneer to what is a fairly mellow and at times dreamy instrumental. There’s a lot of subtle elements involved which reward repeated listens to really pick them out and once again I’m rather impressed by how well everything is layered together. I could see an argument for there being a bit too much going on but I think they’ve probably stopped just short of going completely overboard. Vocally you might be surprised at just how “natural” the singing sounds, granted there’s a sugary sweet tone at times but it’s balanced out by some pretty nice mid to low register delivery. The lyrics, particularly the chorus are quite catchy and while maybe not the sort of thing I would actively seek out I definitely found myself enjoying this one quite a bit.

After having my ears thrown off by the distorted static during the opening few seconds of “Kansen Chitai Kakutei” I just about manage to find my balance before the song’s bass heavy synthesizer instrumental gets into full swing. I’m sure this one sounds pretty dense in a venue with a decent sound system, that’s for sure. It also doesn’t feel as bright as the previous two tracks, with maybe a bit more of a serious or slightly melancholic tinge to things. There’s still a few sparkly sound effects drizzled in for effect but this one is a bit more deliberate and measured in its approach. The vocals follow a similar direction, once again proving that you can’t just simply judge a book by its cover. Everyone gets a chance to shine and wouldn’t you know it there’s some pretty darn good vocalists in this group (hopefully they weren’t all of the members who left). I would have liked a bit more of a hook somewhere but I get the feeling that this is supposed to be more of a Ballad sort of deal so fair enough. It’s still enjoyable and Sennou Meme get to show off their vocal talent, win-win.

You know, for a song titled “Iku” the mini-album’s fourth track really does take a while to…get going. What did you think I was going to say you pervs? Anyway, the song gets off to a fairly slow start with a repeating synthesizer beat that is accompanied by some vocals with a mild echo effect on them, it gives a feeling of emptiness which the instrumental eventually builds up to fill. There’s a bit of a Classical feel to a lot of the instrumentation that does eventually come through here and also more than a little similarity to the kind of syncopated rhythm that Maison book girl make great use of in their songs. Not what I expected from Sennou Meme I must admit. The vocals have a very light, almost dreamy quality to them for much of the song which fits well with the instrumental though I wouldn’t have minded a tiny bit more energy. You do kinda get that in the chorus, which on first listen might not sound too catchy but it does get its hooks into you after a while. Not too bad of a song but you would have to be in the mood to find out what Maison book girl doing a Dream Pop track sounded like to get the most out of this one I think.

How about a little Jazz to go with your synthesizer? That’s the name of the game on “Kansen Tenshi” with its rather liberal application of piano and a brass section. The instrumental does at times feel like it takes on more of a Classical influence but it never fully commits to that kind of direction. Instead we get a fairly mellow composition that you wouldn’t be that unhappy to hear from one of those trendy City Pop artists that seem to be quite popular in Japan these days. Once again, I do wish there was a little bit more energy to things but I guess that’s just not what we’re going for right now. The vocals are similarly pretty mellow, mixed more towards the middle of things so they do fade into the instrumental every so often. Not something I personally mind but I know some of you out there prefer your vocals to be crystal clear in the mix. Another rather enjoyable song in yet another different style, pretty impressive work from such a new group I think we can all agree.

We close things out with “Bara no Toge, Skirt Yabureta” which takes those vague Classical influences that I’ve mentioned previously and really leans hard into them. There’s enough synthesizer and sparkles added so that we don’t all have to get out our powdered wigs but it’s kind of interesting to hear an Idol group go down this sort route. This all of course makes for another not so energetic song which there might be one or two too many of on this mini-album but I’m more inclined to give that a pass because each one does something different which keeps things interesting. Speaking of different, the vocals on this song are definitely a bit more energetic which is a good thing but I wouldn’t have minded a stronger hook or something. I suppose that wouldn’t have been too appropriate given the style of music that’s influencing this track but it might have given it an extra something-something. Still another interesting listen though, definitely not something I hear every day so that’s cool.

This mini-album is a pretty great example of why you should never judge a book by its cover. If I hadn’t seen Sennou Meme before listening to this mini-album I would have thought they were going for something along similar lines to Zenbu Kimi no Sei da. What we got instead was a pretty diverse selection of tracks, drawing from all manner of influences and with some pretty solid singing to boot. Not everything was something I’d actively seek out to listen to but I didn’t dislike anything I heard here.

Given the newness of Sennou Meme it’s pretty hard to judge how things are going to play out from here. Line-up problems will likely persist for a while because this is Idol after all and things are still kinda rough around the edges despite the praise I’ve given in this review. It’s going to be interesting to see how things develop over the course of 2019. This group certainly seems to have a lot of potential though.

Enjoy the content? Consider supporting the site on Patreon for as little as $1 a month.
Kansen RecordsMini-Album ReviewSennou Meme
0 comment
FacebookTwitterTumblrRedditEmail