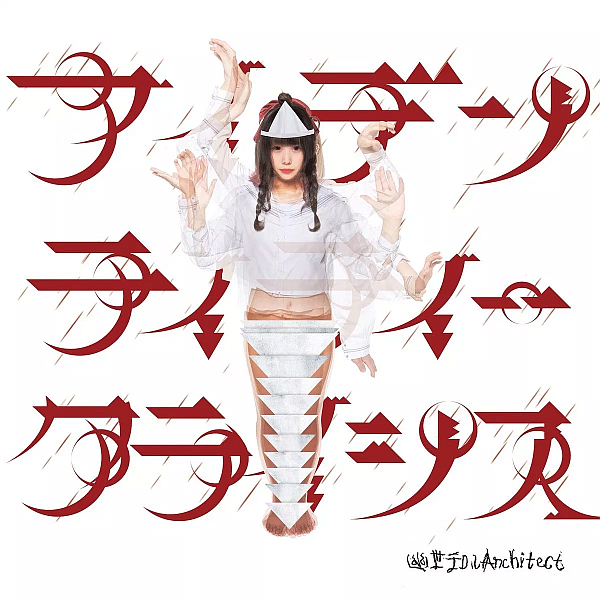 My thoughts on “Identity Crisis”, the latest EP from Kaqriyo Terror Architect.

Well, I’m pretty much recovered and readjusted to the trappings of everyday life after my Japan trip so let’s bang out some reviews shall we? This week I’m taking a look at “Identity Crisis” which is the most resent EP from Kaqriyo Terror Architect and a release that I had been looking forward to with a fair amount of anticipation. Now, I’m a bit late to the party on this review I must admit but it did come out like 4 days before I was due to fly to Tokyo. In an ideal world I would have written up a nice review for you all while on holiday but you know how these things go.

So this is the first new release from KTA in quite some time, with their last offering coming in the form of their debut album “Cultural Mixing” (review here) all the way back in February. I would have to guess that the long layoff is due to the addition of two new members in Sumomo and Sento Namidamaru. Getting them up to speed would understandably take precedence over releasing new music and I believe this release was also pushed back a month or two from its initially announced street date. Well, KTA did put out one of the best albums of 2018 so I guess we can cut them some slack, right?

This is EP is an interesting release on a number of levels. Of course it’s the first time we’re hearing Sumomo and Namidamaru’s vocals on tape (you know what I mean) and following up “Cultural Mixing” is going to be a bit of a challenge in and of itself. The title “Identity Crisis” also intrigues me given what that term usually stands for. Is it just a cool sounding title or is it actually going to be a theme that runs throughout this EP? I have been known to read too far into things in the past after all. I suppose there’s only one way to find out really, let’s get this review started and see what KTA are working with this time.

Title track “Identity Crisis” leads off the EP with an opening synthesizer instrumental that I think is best described as being very dense. We’re not quite hitting wall of noise status but it does create a sense of overwhelming that is only broken up by a bit of drumming and some lighter synth beeps and bloops. None of this really lets up when the vocals come in either, which is something that I’m not totally sure how I feel about. There are plenty of times where they’re able to cut through the roil but there was also more than one occasion where it felt like the instrumental was going to engulf everything it surrounded. This was the story of much of this song save for the chorus where things brightened up considerably. I suppose I should also talk about the vocals a little bit huh? For the verses they went with the faux Rap style that KTA have used on quite a few tracks previously. It worked to varying degrees depending on who was delivering a particular line. I also think Nonamera said “I don’t give a fuck” at one point which was pretty hilarious to me. The chorus is much more energetic, with a veneer of auto-tune which I felt worked quite well and didn’t feel that out of place. It probably helped that it was really catchy too though. Not a bad opener at all.

Second track “Too late” breaks out the drum machine and features it in a pretty prominent role for much of the song. It’s also accompanied by some pretty heavy bass tones and attempts to put a new spin on some previously explored influences. This might sound kinda weird to most of you but I think in a way that this is a pretty chill song. I know that the bass and pounding drum patterns are at odds with that statement to a fairly significant extent but there are some more ethereal moments woven into the song too. Granted a lot of them do occur when there’s vocals being delivered, and there didn’t feel like there were too many of those on this particular track. What vocals were included were pretty heavily auto-tuned, which I think went fairly well with what the song was trying to accomplish. They sat them more towards the middle of the mix though which I do think is the way to go in a lot of cases but as seen here sometimes you do run the risk of burying lighter notes under a much heavier instrumental. KTA tried a few different things on this one and there were several moments that I found to be rather enjoyable. That being said, as a complete package I don’t think I’ll be rushing back to listen to this particular song.

The EP’s mid-point is marked by what I would consider to be a more conventional KTA song in “Seigun”. You probably wouldn’t think that based on how the songs opens, sounding much more like something you might hear from sister group Zenbu Kimi no Sei da if I’m totally honest. I enjoyed it personally, but I know there’s a few people out there who get a bit bent out of shape when Codomomental groups start sounding too similar to each other. Anyway, the beat drops about a minute in and things really do start sounding more like a KTA song. I’m talking hard EDM instrumentals with a bit of a Dubstep influence. Vocally you get a bit of the faux Rap coming in which is something that KTA always manage to pull off fairly well. You also get some of those signature whispered lyrics that I don’t need to hear all of the time but they’re a good calling card if used sparingly. If all of this sounds like a good time to you then you’ll be fairly disappointed when the majority of the rest of the song flips back to the more Zenkimi style that it opened with. Again I quite like what they did, well the BABYMETAL style “woah” part was a bit eyebrow raising, and I felt like the song had a really good energy to it and was rather catchy. Definitely my favorite of what this EP has offered so far.

You know how there’s some songs where you hear the first 10 seconds or so and you just know it’s going to be at the very least an interesting listening experience? That’s how I felt when I hit play on “Dying Akasatana”, I had a pretty good feeling that it was going to be a good song and I really wanted to know where KTA were going to go with it. Sticking with the apparent theme of Poppy, lightly auto-tuned vocals (Nonamera just sounds like that naturally, trust me) isn’t likely to please some elements of their fanbase but once again I find them to be catchy and rather fun to listen to. They pair well with the song’s upbeat, synth driven instrumental that has some pretty interesting melodies that will likely take a few listens to fully appreciate. I’m not entirely sure about the rather generic air horn sound effect that leads into the breakdown though, but I think I’ll be able to overlook it considering how good everything else is. Speaking of the breakdown, we once again get a bit of Rap incorporated into the song along with some overly dramatic but very well delivered lines from Yamakomaro. There’s a lot of nods to the “original” KTA sound while also trying out new things that for me work and work rather well. A couple of really enjoyable songs in a row here.

The EP closes out with the rather ominously titled “Oblivion”. A song title that conjures the idea of some pretty dark, heavy themes or at least it does for me anyway. The song’s somewhat fantasy inspired opening instrumental does rather put paid to those ideas I must admit but once again it seems like KTA are trying out some different things. The instrumental is very guitar heavy, taking on what I would describe as a light Power Metal feel but you’re all free to correct me if that’s the wrong genre to use. I thought it was pretty cool at least, good energy and some interesting riffs that were a welcomed change from the usual synthesizer antics. Even the way that the vocals are delivered is a departure from what we’re used to, sounding positively “normal” in their tone and structure. The fact they even got Nonamera and Kotetsu to tone down their usual high pitched delivery should say quite a lot. It’s probably not what most people are looking for from a KTA song but I think it’s kinda cool that they took at least one track to show off the vocal talents of the girls without cranking the auto-tune or having them exaggerate things too much. Is this a KTA song? Of course it is, their name is on it. I totally get that it might not be what we’re used to though.

I suppose in the end “Identity Crisis” did turn out to be a pretty appropriate title for this EP. There was definitely an element of the typical KTA sound in play for most of the tracks but this release was pretty experimental even by their standards. I didn’t particularly care for a couple of things that I heard but there was definitely several really enjoyable tracks here and a lot of the stuff they’ve tried out was pretty interesting too. Just goes to show what can happen when you have a few new faces in the studio, for better or worse.

2019 is going to be a very interesting year for KTA. They’re obviously trying to tweak the formula and add new things to it, which people are going to feel how they’re going to feel about that. They’re also losing Kotetsu to Tsureure which will remove an element of the vocals that made them unique, though I’m sure Nonamera can fill that gap well enough, and they’ve just added a new member in Komari Yuu who is an unknown quantity at this stage. In any case, I look forward to hearing KTA’s next release and also seeing how they do with their new new line-up going forward.