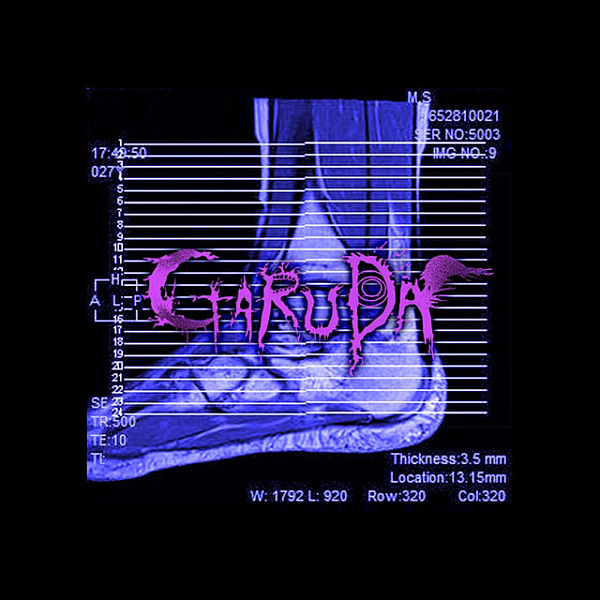 My thoughts on “Mousugu Yuki ga”, the first single from GARUDA.

It might have taken me a while, but this week on the site I am very pleased to be able to finally write an article about GARUDA. “The Dynamic Underground Idol” who also goes by Sakimura Yuffie might already be familiar to those of you who follow Melon Batake a go go!, lord knows I go on enough about how awesome they are. They’re pretty much one of, if not my favorite Idol group right now and that’s saying a lot. Thanks to my buddy Kris by the way, for introducing me to both Melon Batake and GARUDA’s music earlier in the year. The guy has some pretty good taste as it turns out.

So GARUDA is Yuffie’s solo project that she’s been working on for about a year and a half now. It actually predates her time in Melon Batake, although said group does take up much of her time these days. However, when she isn’t performing on stage as an Intergalactic Rockabilly Superhero Yuffie takes on a much darker role as GARUDA. A black dress, plague doctor mask, glowing red microphone and all manner of unsettling stage props make up her act, of which various flavors of Rock, Metal and even Industrial serve as the soundtrack.

“Mousugu Yuki ga” is GARUDA’s first proper single, although she’s had a CD-r or two along the way leading up to this. There’s a couple of familiar faces behind this release, of which NECRONOMIDOL collaborator Mr.Perkele is one. The other is Melon Batake a go go’s producer Kinoshita Moritaka which I suppose makes sense in a lot of ways. I have to say, neither has disappointed me so far with their work within the Idol genre and I’m not expecting them to start now. Let’s take a listen shall we?

The single, which has 4 tracks, opens with “GARUDA -Invasion-“. It’s an instrumental track that lasts a little over 1 minute, making it akin to the “Intro” track that featured on many albums during much of the 00s. Mr.Perkele crafted this rather unsettling piece, which features air raid sirens, an ominous drumbeat and some somewhat familiar sounding synthesizers if you’ve heard a Melon Batake song or two. There isn’t that much for me to dissect here but I think the track does a good job of setting the tone for what is to follow.

Which brings us on to the first “proper” song from the single in “Oh My Cat”. The opening instrumental feels instantly familiar, as it is done in a similar Rockabilly style to that of Melon Batake a go go. Hardly surprising when you consider that it was composed by one Kinoshita Moritaka. The guitar follows a well established Rockabilly sequence of riffs but with a darker veneer provided by wailing synthesizers to give it more of a Horror theme. It also serves to spice up what is admittedly a fairly simply structured instrumental by all accounts, not that it’s a bad thing at all. It will likely come as no surprise that the vocals aren’t exactly cutesy Idol Pop, with Yuffie favoring a lower, some might argue more natural tone in which to deliver her lyrics. This also plays well with the creepy atmosphere created by the instrumental. There’s a noticeable echo effect on the vocal track too, which I wouldn’t normally care for but I think it works with the theme here. I also liked the odd chuckle or sigh at the end of some of the lines, just little things like that can really add personality to a song. I like this one, I like it a lot.

Things get pretty interesting on third track “Wild Cat”, well to me anyway. Those of you with a keen ear might have detected more than a few similarities between this song and Melon Batake a go go’s “IDOL CATS” (review here). Well, they’re kind of the same song although there’s several lyrical differences and a slight pitch difference. Oh and I guess the most obvious difference being that it’s just Yuffie singing this song. I’m not sure which song came first, I probably should have asked someone, but instrumentally there’s very little difference between the two. That’s fine by me because I really like the instrumental as it is and sometimes it’s okay not to reinvent the wheel. I digress, lyrically there’s no mention of idols like in the Melon Batake version, which is understandable given the different visuals and demeanor that the two acts have. The GARUDA version also takes on a less playful tone, with the deep richness of Yuffie’s voice being used to paint a darker, more unnerving tone. I like both versions of the song for similar but also different reasons, if you’re a Melon Batake fan but have never checked out GARUDA before then this seems like an easy way to test the waters.

The single closes with “Mousugu Yuki ga”, the song from which it takes its name. A bit unconventional to put the title track last but it prevented me from doing the same old tired setup so that’s cool. The credits and file info don’t actually say who composed this song, but I did a little digging and I believe that it’s another Kinoshita Moritaka production. This one is nothing like the Rockabilly influenced songs we’ve heard previously, instead opting to be based more in Heavy Metal. That main guitar riff seriously reminds me of like a wrestling theme song from the mid-2000s or something but I can’t put my finger on it. It’s really thick and heavy on the distortion, only relenting to allow Yuffie to deliver her lyrics with as much disdain as she can muster. She also hits and hold some really nice notes that are as, if not more impressive than the guitar solo about three quarters of the way through. If you want a song with some attitude to it then you’ll find what you’re looking for with this one. I also like that it drew heavily on the sort of music that Yuffie is a big fan of too. Did I mention it’s a song about it snowing soon?

Given the similarities between several of the songs on this release and what Yuffie gets up to as part of Melon Batake a go go, it should come as no surprise that I really like this single. The horror themes coupled with the Rockabilly, Hard Rock and Metal influences make for some fresh ideas that I hope will continue to be explored. It might not be to everyone’s taste but this kind of stuff really appeals to my ears for some reason.

Hopefully this review got you interested in checking out more of GARUDA. Yuffie certainly goes all out during her performances, sometimes in odd or unsettling ways but it’s always memorable. She’s also very appreciative of foreign fans so if you like this single maybe go hit her up on Twitter and let her know. It might also lead to more music coming our way and I certainly wouldn’t mind that one bit.