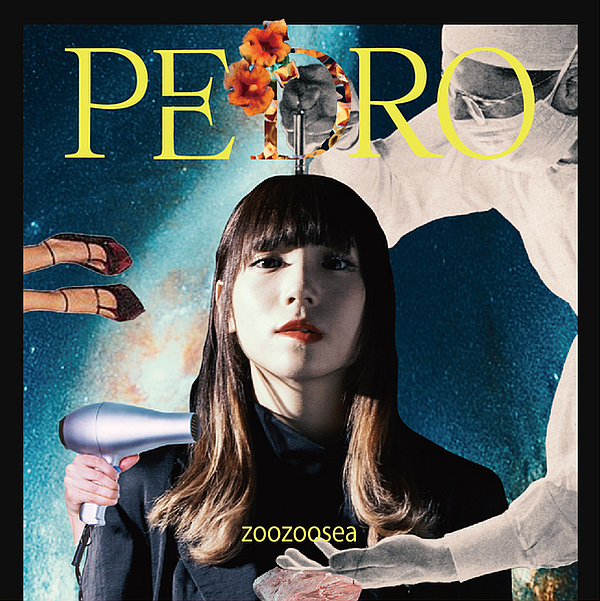 My thoughts on “zoozoosea”, the debut mini-album from Ayuni D’s solo project PEDRO.

Uhh okay, talk about unexpected but I guess Ayuni D from BiSH is also getting in on the solo release action too. Unlike her colleges Chicchi and Aina who just released their double a-side solo debut single (review here), Ayuni has only gone and one-upped them with a whole mini-album of songs. In typical WACK fashion this was released in guerrilla fashion on the same day as the aforementioned solo single, causing lots of head scratching…and some nonsensical outrage.

What’s this thing all about though? Well, Ayuni D appears to have her own solo project now in the form of the band PEDRO. Ayuni has apparently written all of the lyrics for the songs and also plays bass on them as well. Matsukuma Kenta is perhaps unsurprisingly in charge of producing and pretty much everything else. It appears that Ayuni is the only full-time member of the band but Tabuchi Hisako of Number Girl fame plays guitar in the MV released to promote the album’s release so clearly Ayuni has some good connections.

Given the abrupt nature of this mini-album’s release and me not exactly having intimate knowledge of Ayuni’s musical influences or taste, I can honestly say I have no idea what to expect out of this. It has full Avex backing and Kenta is producing it so I can’t imagine it being bad. I guess what I’m hoping to hear is music that Ayuni is passionate about, similar to how you could pick that feeling up from Chitti and Aina’s single. Outside of that, who knows. Ayuni is a bit of a wildcard at the best of times so instead of me speculating let’s just find out what she’s come up with shall we?

“Gomikuzu Loneliness” kicks things off, giving all of us our first taste of what this project is all about. Fittingly it opens with a very nice bass line because why wouldn’t it right? Okay so Ayuni can play bass, that’s neat but what about everything else? Well, my ears definitely pricked up when those first few distorted guitar chords came through my headphones, a pretty heavy Grunge influence going on which I doubt many would have expected. It’s a bit uncommon to have the bass be such a prominent feature of the instrumental but it works well for this style of music and this is the Ayuni D show after all. Speaking of which, this release is probably going to divide opinion when it comes to the vocals. They’re very natural, with Ayuni not trying very hard to hide her accent, and love it or hate it she isn’t glossed over in post-production. While far from being an Idol Pop song, “Gomikuzu Loneliness” is still actually very catchy due to its lyrical structure and chorus. I’m really impressed by this song although I can see why someone else wouldn’t find it as appealing due to its raw nature.

We roll right along into “zoozoosea”‘s heavily Punk influenced second track “GALILEO” which comes screaming out of the gates with a blistering guitar solo and some gang chanting. The instrumental as a whole is very brash and in your face, with a coating of distortion that seems to be a bit of a theme so far with this mini-album. The bass is much more subdued here but still makes its presence felt when appropriate. This is all underpinned by the drumming which serves as one of if not the major driving force of the song. If you’re into your high tempo, very energetic Rock songs then Ayuni has you covered with this track. Besides the aforementioned gang chants, vocally this is likely to be a bit more palatable if “Gomikuzu Loneliness” was too raw for your liking. Ayuni still shows off plenty of attitude in her delivery, and also a good bit of twang from her Hokkaido accent but her performance fits perfectly with the atmosphere created by the instrumental. While on the surface this might just seem like a Punk Rock song you can jump around to, there’s actually some very clever riffs, vocal runs and hooks interweaved into it to give a bit of extra dimension. Very nice.

If for whatever reason you haven’t checked out any of the other songs from this release yet, you’ll probably at the very least be familiar with “Jiritsu Shinkei Debarinaka”. It’s the song being used for promotional purposes and has a pretty slick looking MV to go along with it. Not quite as fiery as “GALILEO” but the song is packed full of ear pleasing riffs and great rhythm that once again makes it very easy to find yourself bopping your head along to it. Seems like they’re pulling influences from all over the place for this mini-album as this song I’d say has a good amount of Indie/Alternative Rock leanings so plenty of variety. Maybe it’s just me but did anyone else kinda think the vocals were delivered in a similar way to GANG PARADE’s “Lai Le” or EMPiRE’s “Dope”? Well, without the “problematic” overdone accents anyway. It is Matsukuma Kenta after all so it shouldn’t come as a surprise when an idea gets reused here and there, although I feel like this instance was much more natural and let Ayuni put some of her personality on the song. Awesome guitar riffs, a good beat and a strong chorus. Do you really need anything else?

Need a break from the frenzy of “zoozoosea”‘s first few tracks? “Amakunai Tokyo” takes on a much more gentle tone while still being in keeping with the overall themes of the mini-album. Ayuni opens the song singing for the most part by herself while the band tunes up behind her, it’s quite the pleasant opening sequence and something a bit different from what we’ve been hearing so far. The song eventually shifts into high gear, although maybe that’s the wrong phrase to use as the energetic roughness of previous songs isn’t as present here. Instead “Amakunai Tokyo” plays out maybe as close to a Ballad as you’re likely to hear from this project, with Ayuni’s voice being the main focus, and she certainly puts in a very emotional and enjoyable performance providing once again you like her distinct vocal stylings in the first place. Now that’s not to say there’s no instrumental on this track, far from it in fact. If you think of the times a Punk band will try to do something a bit more heartfelt and sentimental, that’s kinda what we get here too. It’s not trying to be flashy, although there’s a nice guitar solo and a catchy riff or two, but it does the job that’s asked of it and creates that sentimental atmosphere that Japanese artists are able to craft so well.

I’m sure there must be a few fans of BiSH’s earlier work still lurking around here somewhere, you know back when they could have a bit edge and weren’t trying to please as many corporate masters. Well, if you miss those days then “MAD DANCE” should invoke some feelings of nostalgia in you, it definitely did for me at least. In fact, if this song was released by BiSH then I’d probably take back a lot of the stuff I’ve been saying about how unexciting they’ve been lately. Well Ayuni gets the praise for this very chaotic Rock number, once again featuring all manner of distortion, WACK style guitar riffs and infectious drumbeats. I didn’t expect to still be being blown away 5 tracks into this release but dammit this instrumental is just fantastic. I know I’ve mentioned a couple of times now about how Ayuni’s vocals probably aren’t going to appeal to everyone, and I think that’s especially going to be the case for this song in particular. She gets a bit shrill at times while shouting out her lyrics, something you could say adds a little extra and is fitting for a song called “MAD DANCE” or you could opt to take a dimmer view of things. I personally didn’t mind it that much but I feel like I need to mention it because I know some people might. Fantastic song though in my opinion.

It’s hard not to be reminded of the mid to late 90s style of Pop Punk ala Green Day and other such bands when listening to “zoozoosea”‘s penultimate track “Happy ni Ikite Kure”. The guitar riffs and playing style draw heavily from that era, almost to the point where you could make a case that this song is perhaps a little too derivative. I grew up listening to this kind of music so I’m much more forgiving due to nostalgia but I think the instrumental on this song is still some really fun stuff to thrash around to. The drum solo…breakdown/bridge/thing? about 2 minutes in was really cool and gave Ayuni something different to sing over. Speaking of the vocals, they’re what got the distortion treatment on this track, almost an echo effect I guess is how I’d choose to describe it. I think it worked pretty well and fit what they’re going for with the instrumental. This is another one where they let Ayuni go a bit wild so be prepared for more attitude, shouting and general miscreant behavior. Sure the vocals might not win many awards for being a technical masterclass but I love how much personality Ayuni puts into these songs.

Which brings us to the mini-album’s final track, the rather simply titled “Uta”. At verging on 6 minutes in length, this song is nearly twice as long as any other offering from “zoozoosea”. I think it justifies its feature length runtime though, as it takes you on a sweeping journey through several awesome sequences before the song and the mini-album reaches its climax and all we’re left with is delay pedal feedback. Ayuni opens, being accompanied by guitar then eventually bass and drums are introduced. This lasts just long enough before the song opens up and we’re treated to some stunning guitar work, be it the soaring ethereal moments or the epic solos and everything else in between. Ayuni pours her heart out once again with what might be her most impressive performance on the mini-album, evoking all manner of emotions as she brings the curtain down on her first solo offering. I personally hope that it won’t be her last either. This song is the perfect closer, something that Japanese musicians seem to have a real knack for, and yeah maybe the last 2 minutes were a bit indulgent but I think Ayuni more than earned it. Brilliant stuff. 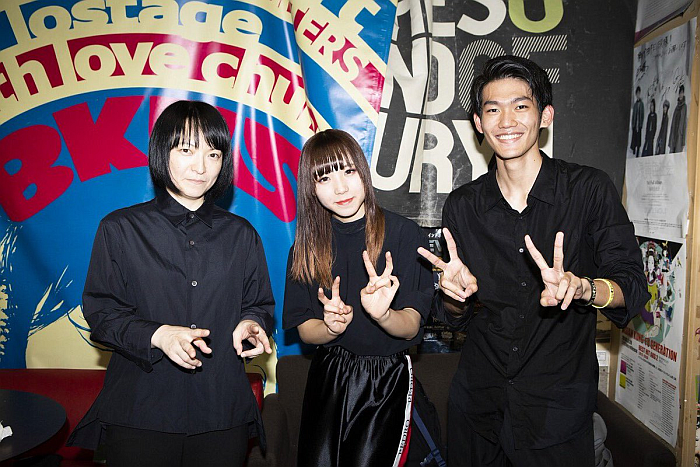 Nobody saw “zoozoosea” coming, nobody had any idea what to expect from it, some people hated it just because it was released on the same day as Chitti and Aina’s single. I’m just sitting here absolutely blown away that Ayuni apparently learned bass and wrote a mini-album’s worth of songs in about 7 months. Sure, that story could be total nonsense and in any case Ayuni certainly got plenty of help from her WACK and Avex connections but does that makes this release any less awesome? You guys be the judge I guess, but I don’t think it does.

I honestly wouldn’t mind if this project became a semi-regular thing for Ayuni. Naturally BiSH is going to remain her and the other members’ focus for at least another couple of years but why not let them all have some fun with stuff like this in the meantime. If BiSH has to be more advertiser friendly then let the girls do some weirder stuff under their own banners. That sounds pretty cool to me at least.

[Review] PassCode – Tonight / Taking you out