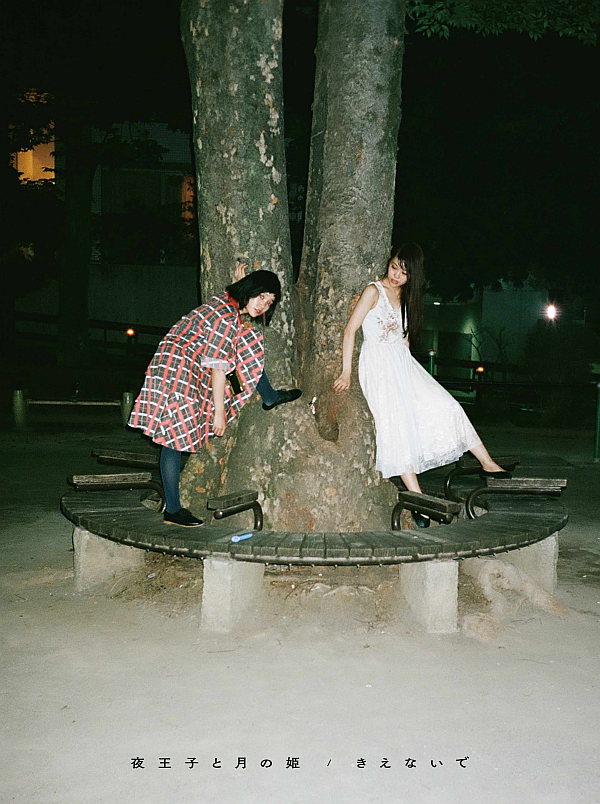 My thoughts on “Youji to Tsuki no Hime / Kienaide”, the solo debut single from Cent Chihiro Chicchi and Aina the End.

1. Youji to Tsuki no Hime
2. Kienaide

So we all remember when WACK did their general election voting thing late last year right? You do, well that’s great! Now, how many of you remember that the girls who ranked 1 and 2 were supposed to get full fat solo debuts as a reward? Well I guess even Watanabe Junnosuke and the folks making the decisions over at WACK kinda forgot that part of the deal. Or maybe they’ve just been busy focusing their attention in places that need it more. Either way, here we are almost a year later and finally Chicchi and Aina get their rewards.

To be fair, Watanabe did actually give Yui ga Dokuson from GANG PARADE her indie solo debut earlier in the summer…after being reminded by a fan on Twitter. Yui’s single “Like a virgin” (review here) definitely featured the kind of WACK shenanigans that we’ve all grown to love over the years. I’m not so sure the idea of having Aina or Chicchi sing very blatantly about sex and dick would really fly with the Avex big-wigs though so I don’t think we were ever in danger of a repeat performance on this single.

Instead, it would appear that Chicchi and Aina have opted for songs that mean something personal to them. I’ll get into it a bit more as we go along but the one cover and one original song that make up this CD both hold a special place in each of girls’ hearts which is pretty cool I think. I’d much prefer this to them just being given some run of the mill Avex/WACK collaborative effort to perform. Well, all of that sentimental stuff is great and everything but how good are these songs really? Let’s find out.

Chicchi leads off the single, receiving top billing by virtue of her perhaps somewhat surprisingly placing first in the WACK election. Her song “Youji to Tsuki no Hime” is a cover of a song originally released by the now defunct Japanese Rock band GOING STEADY in 2002. Their former frontman Mineta Kazunobu now fronts the band GING NANG BOYZ of whom Chicchi is a big fan. Chicchi’s rendition begins with her singing acapella for a brief time before the song’s main instrumental kicks in. Much like the original version fuzzy, distorted guitar tones coupled with a steady drumbeat comprise much of the instrumentation for this track. The chorus naturally provides some room for the guitar to soar and drumming to get a little bit more energetic but for the most part the song is very relaxed and measured as it slowly climbs to its crescendo. Chicchi delivers a fantastic vocal performance here, perhaps because she’s had plenty of practice at karaoke over the years, and really pours her emotions out over the track’s near 8 minute runtime. This is made that much better by there not being too much post production on the vocals either, so thumbs up for that. Perhaps the only real downside to the song is that it’s fairly repetitive but I still enjoyed it greatly. More please!

Up next is Aina the End with what was maybe the more anticipated song of the two from a lot of people? Maybe I read the mood wrong, let me know. Anyway, for her song Aina decides to go with an original of her own creation in “Kienaide”. I believe this particular song actually predates Aina’s tenure with BiSH and I also think you can find it on YouTube from back then if you do a bit of digging. The fact that Aina chose it for her solo debut must mean it’s very important to her so there’s a pretty interesting story to tell in there I’m sure. It’s easy to tell that Aina wrote this song, as it plays to all of her strengths vocally. Her raspy voice melts the ears and she handles the song’s infrequent calls for high notes with relative ease, certainly moreso than on recent BiSH efforts. The instrumental that is comprised of piano, acoustic guitar and light percussion paints a perfect backdrop for Aina to do what she does best. She really does appear to be in her element with this song, so hopefully the producers that Avex pair her up with for her next guest spot are taking note. “Kienaide” is a great song, Aina has a wonderful performance for someone with well documented vocal chord issues, this one delivers on everything asked of it.

They say that good things come to those who wait and I think that in the end, almost a year after the fact, we did get something pretty good from Chicchi and Aina’s solo debuts. It seems like WACK really worked with them to let both girls put out something they were passionate about and that really meant something to each of them. That’s pretty awesome in my book, and the songs were great too which didn’t hurt either.

I have no idea if this release means anything going forward. It could just be a one-off thing or maybe it’ll lead to some more solo work for both Chicchi and Aina in the future. The latter is already collaborating with some big time Japanese producers so who knows. There’s also the fact that Ayuni D just launched her own solo project on the same day this CD came out to consider. Expect a review for that soon but it certainly is an interesting time in the BiSH camp right now.