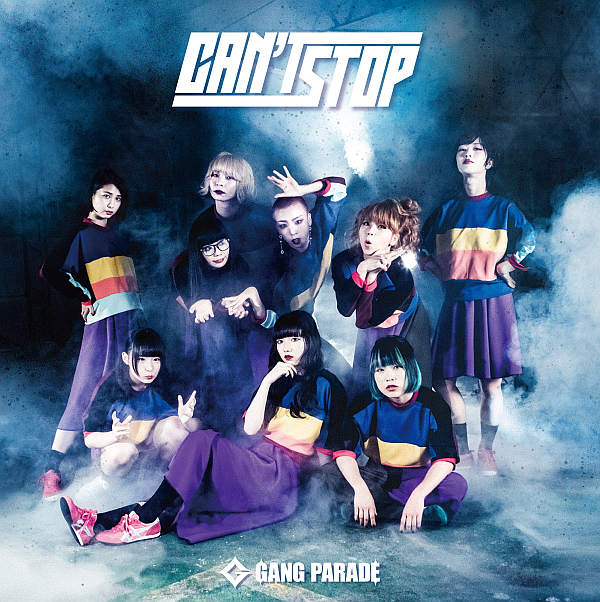 My thoughts on “CAN’T STOP”, the latest single from GANG PARADE.

It’s reasonable to say, in my opinion anyway, that GANG PARADE haven’t exactly been setting the Idol world on fire with their musical output thus far in 2018. Granted what they have released so far this year hasn’t been terrible either, but for whatever reason they just haven’t been able to take themselves higher than they did with their album of a similar name that released at the tail end of 2017. Perhaps that album gave me unreasonable expectations but that’s just how I feel personally.

I suppose to be fair the group did add two very green members in Haruna and Usagi shortly before the release of their last single “GANG 2” (review here). Given how much training the pair apparently needed to get themselves up to speed with the rest of the group, I guess it would make sense to play things relatively safe (on an a-side anyway). I’m sure it was hard enough to learn all of the songs and choreography without throwing a couple more complex/flashy numbers into the mix.

Well, they’ve both had a few more months to get settled in now so I’m hoping that GANG PARADE’s newest single “CAN’T STOP” will take a few more risks than the group has been taking in recent times. Solid, safe a-sides are one thing but even GANG PARADE’s b-side game has been a bit questionable lately, so hopefully we at least get an interesting one of those here. This intro has been fairly harsh by my standards but I only say this stuff because I really like GANG PARADE and I always look forward to whenever they’re releasing something new. Anyway enough of this nonsense, let’s start the review.

Upon hearing the opening guitar riff on title track “CAN’T STOP” I have to say that I had pretty high hopes for the song. Sure, fuzzed out Indie Pop isn’t really something I’d associate with GANG PARADE but I like both of those things so why not? In fact, the instrumental on the whole is actually really enjoyable, granted that really repetitive synthesizer melody that sounds like a bunch of laser guns going off is not something I’d personally have done. They did however manage to get some piano in there so they ticked that box for me which was cool. Unfortunately, it’s the vocal side of things that let this song down for me. No hate on any of the individual performances but the overall concept just kinda doesn’t do much for me. The tempo is pretty low and the energy is pretty lacking compared to the instrumental and I guess it’s to make it a bit more dramatic and emotive but yeah. I was just waiting for the song to go somewhere and it didn’t, all I got was some faux-rapping which worked well enough. Part of me does think this song could grow on me and a lot of other people, I’m just not sure it’s going to be given the chance.

Moving into the single’s sole b-side and we are presented with “RATESHOW”. Does that term actually mean anything or did someone in a recording studio somewhere just make it up? Let me know. So yeah, I actually had to check that this was a GANG PARADE song at first because I never thought in a million years that I’d ever hear a Swing Jazz style song out of them. Now granted they’ve added some synthesizer highlights here and there so it’s by no means a traditional take on the genre but I’ll be damned if the instrumental isn’t on point and really catchy. Vocally things are so much better than “CAN’T STOP” too, with the members showing a bunch of personality and some not so often seen lower vocal tones. It is GANG PARADE though so there’s a few moments where we stray into slightly more comedic territory but I ain’t a purist and I love fun songs so that doesn’t bother me at all. I’m not really sure I can imagine where they’d be able to slot this into a typical GANG PARADE setlist but I’d love to see how they pull it off. There’s also a question of who exactly this song is going to appeal to from the regular GANG PARADE crowd but in my mind they’ve absolutely smashed it on this one. This is the kind of experimentation I want, more please!

I’m not really sure what the short-term reaction to “CAN’T STOP” is going to be as a whole. GANG PARADE tried some new things, especially on that b-side, but like I mentioned earlier I don’t know if people are going to give the a-side enough time to sink in so they can appreciate it fully. I’m still not that sold on it as you can all tell, but I do think there could be something to it. They totally killed it on the b-side though so I’m pretty content with this outing.

It seems unlikely that we’ll get anything more out of GANG PARADE before the year is over. Although they have been making a habit of releasing a new album these past couple of Novembers so maybe there’s something to that pattern. Either way, I expect another album is coming next and hopefully they’ve been saving up some of the more experimental material for that. Either way, as always if GANG PARADE are releasing something new I will be looking forward to it greatly.

[Review] Broken By The Scream – AN ALIEN’S PORTRAIT