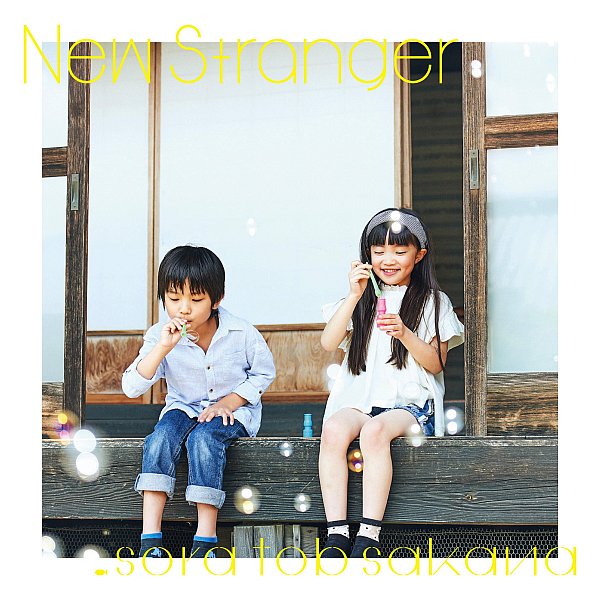 My thoughts on “New Stranger”, the latest single from sora tob sakana.

Hey wait a minute, didn’t I just write a review for a sora tob sakana release? Well it sure doesn’t feel like it was that long ago since their “alight ep” was released (review here) and considering it took me forever to actually get around to reviewing it…we’ll leave that thought there. In truth it’s a bit of both. My backlog management coupled with sora tob sakana’s new found productivity (seriously, two releases in a couple of months compared to one in a whole year) means you guys are getting more sora tob sakana content right now, whether you like it or not.

So yeah, sora tob sakana are back with their new single called “New Stranger” which is also their first major label single release after signing to Warner Brothers. I will be sharing my thoughts on it in this article here like always and hopefully everyone finds it interesting. While I have my doubts that my turnaround will be as quick as theirs was, I’ll try my best. I liked their previous “alight ep” well enough, even if it was a bit more commercialized, so I’m interested to see what they’ve cooked up for us this time too.

Now for full disclosure, the single’s title track is the theme song for an anime called “High Score Girl” so I’m tempering my expectations accordingly. As should everyone else when an Idol group is asked to provide a song for a more mainstream audience. That’s not to say it can’t be good though and there’s obviously two b-sides involved as well. Given sora tob sakana’s tendencies to get a little bit experimental I’m at least expecting to hear a couple of interesting things out of this single. Let’s see if I’m right or not and get this review started.

First up we have “New Stranger”, the single’s title track and as previously mentioned this song is currently being used as the opening theme for the “High Score Girl” anime. That is not something that might be very apparent considering the fairly Math Rock inspired guitar and synthesizer instrumental that opens the song. It doesn’t stick around for long unfortunately, as the song settles into an instrumental mainly comprised of various synthesizer bleeps and bloops. I guess it sounds vaguely similar to something that Maison book girl might produce if they didn’t have access to any physical instruments. On the vocal side of things I’m not really blown away by anything going on here, although it’s not terrible or anything. I think the chorus is probably the biggest letdown because not only is it flat, it has a really rushed flow which probably doesn’t help matters much either. As an anime theme song this isn’t the typical style you’d expect but it does the job well enough. I’m probably here more for the instrumental than the vocals though I must admit.

Moving onto the b-sides and “silver” starts off with a pretty nice Jazz tinged instrumental with plenty of bass guitar and piano so in my book things are already going pretty well here. Indeed there are several moments of brilliance on this track, be it clever little piano sequences or impressive guitar solos. However outside of that the instrumental doesn’t really feel like it’s going anywhere most of the time, it finds its rhythm and sticks to it for the most part. Not a terribly bad thing but considering this song is over 4 minutes long the ears were left wanting a little by the end. Probably a harsh criticism but I did enjoy what was on offer, I’m just selfish and always want more. Once again I find myself having issues with the vocals, but it’s not really any of the sora tob sakana members’ faults. It’s just when you start throwing Jazz or Lounge style instrumentals around you don’t really expect them to be accompanied by super youthful sounding vocals. There’s a disconnect there for me on this one and it’s tough to get past. I wonder how this song would sound in a few years’ time.

Then we come to our final b-side “Hakken” which opens with a pretty interesting instrumental that begins with some piano notes and then proceeds to layer on some synthesizer, drums and assorted percussion instruments over the course of about a minute until the song really gets rolling. It’s a neat way of building up a song that I’ve heard from several groups recently and in almost every case it’s done well, including this one. Once again I’m somewhat reminded of Maison book girl but sora tob sakana have introduced some different elements like drum machine loops to put their own stamp on things. The one downside with this kind of instrumental is it gets pretty repetitive if you’re paying too much attention but once again I’m probably just grumpy and being unnecessarily harsh in my critique of the song. Funnily enough, I actually really like the vocals on this one. I think this style of song really suits the vocal tones of the members and everything is paced well and it didn’t end up sounding like some kids doing a cover of a song by a 45 year old chain-smoking lounge singer. It will come as no surprise that this is my favorite song on the single, just try not to go too Maison book girl on us now.

I dunno, I think I was probably too harsh at times in this review but it’s tough man. I’m not sure what it is really but I just felt like two out of the three songs were missing things and well, I try to be honest in these reviews. I don’t remember ever having a problem with sora tob sakana’s vocals in the past but for some reason these past couple releases they’ve ended up being the thing I’ve had the most issue with. Make of that what you will.

It’s fairly obvious what sort of trajectory sora tob sakana are on now I think. They signed to a major label, they’re doing tie-up songs for anime shows and things of that nature, their sound is going to have to change some. Such is the way things progress when an Idol group “makes it” in the industry. I think sora tob sakana and their producers are still willing to experiment enough to give us some interesting music going forward but when you’re trying to please multiple new masters, things are never going to be the same as they once were. It is what it is.