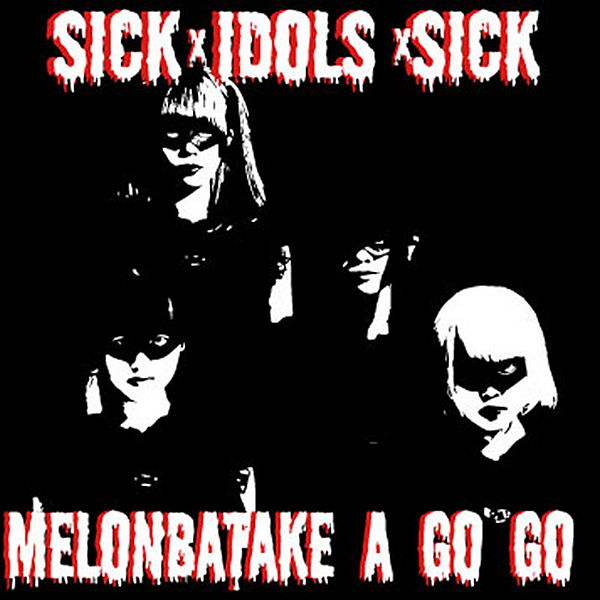 One of my favorite things about music in general is discovering new artists or being recommended them by others. I think it’s pretty cool when you find something new that you really like or if you recommend something to someone else and they end up really enjoying it too. That’s partly why I have this website after all. Anyway, the latter is how I was introduced to Melon Batake a go go (thanks Kris!), the group whose new mini-album I’m going to be reviewing today.

So if you haven’t seen me promote this group a bunch on Twitter already, let me explain the concept. Melon Batake a go go are “Idols from outer space” who dress up like superheroes…stay with me okay? They’re a 4-piece, made up of Nakamura Soze (@sozekgmelon), Rutakame Run (@RunKgMelon), Rukatama (@rukatamaKgMelon) and Sakimura Yuffie (@GARUDA_on) and they perform songs in what I would describe as a Rockabilly style (and I believe they do too). Now that’s something you don’t hear everyday in Idol right?

As I mentioned, “SICKxIDOLSxSICK” is the group’s latest release and also their first mini-album. It’s also the first release to feature the current line-up after several shake-ups in personnel over the last 12 months or so, such is the Idol life. The group is produced by Kinoshita Moritaka, the former bassist of cult Japanese Psychobilly band THE MONSTER A GO GO’S and indeed the majority of the group’s songs were originally created by said band and are now being re-purposed for this project. Not exactly covers per se but not totally original songs either. This is probably not going to mean much to anyone reading this, but credit must of course be given where it’s due.

Anyway, I’ve been waiting a long time to listen to and write about this release and now I finally get to. I won’t lie, there’s a particular song I’ve been looping on SoundCloud since it was uploaded so not coming in totally blind, etc. I also don’t promise to be completely unbiased either, because I really like this group a lot. Let’s get started!

The mini-album starts off with an instrumental track called “Sick Idols”. I believe that this is the instrumental track that Melon Batake usually take to the stage to, so it’s a pretty cool way to kick things off here. I’m not really sure what, if anything I’m supposed to critique about this track though honestly. What I would say is that it foreshadows a lot of things that are to come on the CD. It has elements of various genres of “Billy” music as well as a nod to the outer space and light horror themes that the group are becoming increasingly known for. It pumps up the live crowd and gets you ready for what’s coming next, what more do you want really?

Introductions out of the way and we move into the meat of the album. Things start off with “IDOL CATS” which has a pretty Jazzy sounding instrumental to it, featuring lots of bass guitar and what I would describe as a fairly “classic” drumbeat. It all makes the song almost feel like a show tune in a way but what do I know about show tunes really. Hey, maybe that’s why it has CATS in the title…but I’m probably wrong on that. There’s also this pretty creepy vibe coming off of the synthesizer at times which is even more foreshadowing for things to come later. Vocally is where things differ greatly from most other Idol groups in that it’s almost exclusively the lower register being used to deliver the lyrics. I think it really adds to the atmosphere created by the instrumental and there’s also some rather nice harmonies too. The song is a little on the short side but it achieves everything it sets out to do so no complaints here.

Things take a very strange turn on the next song “Shiroi Majin to Hōrō no ō”. Well I say strange but this is actually a fairly normal sounding Idol song, it’s just in the context of this mini-album I found myself very much caught off guard by how it sounded. The song starts out with a very pleasant synthesizer driven arrangement that wouldn’t be amiss on a release from a more traditional Idol group. Things are pretty similar in the vocal department, with the song coming across very much like a Ballad in nature. Once again there are some really nice harmonies going on and the chorus is pretty great too. The tempo does pick up a bit as the song goes along too which I think helped things along, though I’m not really sure what happened at the 4 minute mark. There’s a very abrupt change in direction with the instrumental going a bit “tribal” sounding and the vocals consisting entirely of “La La La”s. I believe Melon Batake use this as their “towel song” during lives and the last couple of minutes for a short MC. It just feels like two totally different songs when listening on the CD. The first 4 minutes were very good though.

After the curveball that was the previous track, things return to more of what you expect from a Rockabilly group with “Horror Billy Nights”. Well, I guess this song would actually be Horrorbilly like the name suggests but it’s the same ballpark. As you might have guessed, there are a few “horror” elements in this song and most prominently in the instrumental. I call them “spooky synths” because that’s what they sound like to me, but if you want a better frame of reference think the kind of sounds you’d hear in creepy cartoons from like the 70s or 80s. Outside of that once again we hear a well tested drumbeat with some tried and true guitar riffs. There’s also some wailing from the girls to really set the tone. Speaking of which, the vocals for this song are once again much lower than the norm but damn if that “horror billy tonight” part isn’t one of the most pleasing lines I’ve heard in a long time. The chorus in general is super catchy on this one which is always a plus in my book. Did I mention I love the synthesizer by the way?

Well if “Horror Billy Nights” was an awesome song then “The IDOL From Outer Space” is a doubly awesome song. The opening synthesizer and indeed much of the “spooky synth” on this track reminds me of old school Scooby-Doo cartoons for some reason, “Spooky Space Kook” I think the episode was. This is all paired with a main instrumental that draws inspiration from the Psychobilly genre to create this great spooky, psychedelic vibe to things. Vocally they’re sticking with the lower pitched delivery but this time we’re almost getting into chanting territory. Like the previous song, the parts where they sing “The Idol from outer space” are some of the most pleasing lines I’ve heard in ages and there’s 2 songs on this mini-album that I can say that about, crazy! I would also be remiss if I didn’t mention the fantastic guitar solo that takes place in this song, it’s fuzzy and psychedelic and I love it. I kinda felt like there was almost more instrumental than vocals on this song but when I’m enjoying both elements as much as I am I don’t really mind it at all. This is my favorite Melon Batake a go go song in case anyone was wondering.

The mini-album closes with “Change The Wolfman”, which is yet another in a series of awesome song titles. This song is perhaps the least flashy on the mini-album, with a simple but effective…Rock style instrumental that I suppose would fall into the Rockabilly genre if were were to narrow it down further. There are however a few moments where they show off a little with a psychedelic guitar solo or two that I found particularly pleasing to the ear. The vocals keep the theme of being sung lower than usual but not quite as low as on some of the previous tracks. This is probably the most “normal” sounding vocal performance on the CD outside of “Shiroi Majin to Hōrō no ō” if you’re looking to ease yourself into things. Once again the delivery is also a little on the chanty side of things which makes the song give off an almost hypnotic effect while listening. It’s not all serious business though with several funny moments including the line “Ooh, ah, I feel so good!” and a Wolfman howling away as the song reaches its conclusion. A very high tension song that never really takes a break for its entire 4 and a half minute duration. Kind of like a marathon, but in a good way!

“SICKxIDOLSxSICK” and indeed Melon Batake a go go are such a breath of fresh air for me in the world of Idol. I had no idea that I needed this kind of music from an Idol group before but I definitely want more of it now! If you feel similarly then you’ll be glad to know that Melon Batake do have several other songs that they perform live, including a rather nice cover of “Surfin’ Bird” by The Trashmen. I’ll leave you to YouTube that in your own time.

Speaking of YouTube, there’s a ton of Melon Batake live shows posted there if you’d like to see what their performances are like. I’d also encourage you to follow and interact with the members on social media. Some of them have better English than others but they’ll appreciate your support regardless. You can also buy a bunch of cool merch from their online store (you’ll need a proxy though). Finally, Melon Batake are also doing a big one-man live at Shinjuku Loft on November 19th so make sure you come along if you’re in Tokyo around that time. Hopefully we might get a new song or two between now and then as well.