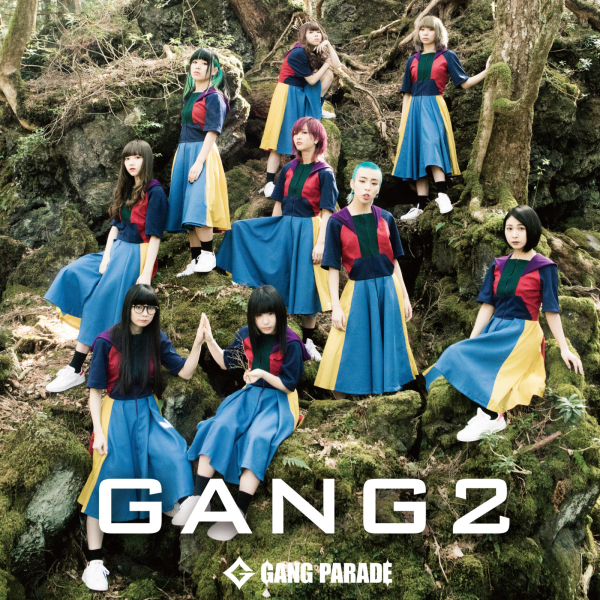 My thoughts on “GANG 2”, the latest single from GANG PARADE.

Man, where do I even begin when it comes to writing an intro for this review. Well, let’s start with the basics I suppose. GANG PARADE have recently released their second single of 2018 and that’s what I’m going to be talking all about here. It’s called “GANG 2” and follows “BREAKING THE ROAD” (review here) that was released back in February. The aforementioned single was okay by GANG PARADE standards but I felt it lacked a lot of creativity when compared to the “GANG PARADE takes themselves higher!!” album (review here) that preceded it.

To say a few things have changed between the release of “BREAKING THE ROAD” and “GANG 2” would be a pretty big understatement. I suppose the most significant one would be Kamiya Saki and Aya Eight Prince being traded back to their original groups, so this is actually Saki’s first single since returning to GANG PARADE. The other pretty significant change of course being the addition of Haruna Ba Chiin and Tsukino Usagi (no, not that one) from the WACK auditions. Quite the line-up change there, that’s for sure.

Given the fairly significant changes GANG PARADE have been through recently, it’s going to be pretty interesting to hear what they go for with this single. It would make a lot of sense to play things a little on the safe side until the new members are settled in more, but this is GANG PARADE and being predictable isn’t exactly their thing. I’m not even sure if Watanabe Junnosuke and Matsukuma Kenta know what they’re going to do with the group from single to single. Well, let’s see what we’re working with here shall we?

It’s hard not to be struck with some sense of familiarity when the opening notes of title track “GANG 2” begin playing. I think it would be more than fair to say that the instrumental for this song occupies a similar part of the musical map as say “Beyond the Mountain” or “FOUL”. Not the worst company to be keeping, but I wouldn’t say “GANG 2” is quite as engaging as the songs I just mentioned and maybe it’s just me but I’ve sort of had my fill of these kinds of songs from GANG PARADE for right now. This song is good don’t get me wrong, and the vocal prowess of the members is something that is always a great listening experience. It’s just really fighting to stand out in an ever growing discography, which I suppose speaks to just how many great songs GANG PARADE have already put out. Solid but pretty safe, which I kinda expected.

Oh boy, what am I even supposed to say about the single’s b-side “Lai Le”? I believe the title is a Chinese term that translates to “Coming” in English, so you can see what they’re going for there. Despite what the MV might suggest, the instrumental doesn’t go full on “Oriental”, instead opting for a WACK style Rock instrumental with a riff that is more than a bit similar to BiS’s “I can’t say NO!!!!!!!”. Sorry if I’ve ruined it for you by pointing that out. Vocally on the other hand, and I’m struggling to find a good way of saying that the verses are kinda sung with a Chinese accent, so I guess I’ll just put it like that. Then Yui Ga Dokuson goes especially hard in the paint for her solo part and I couldn’t help but laugh, I’m going to hell I know. The chorus on this song is really good too, even if it kinda sounds like they’re saying “My vagina” which I think might even be intentional. Crossing the line or just a bit of harmless fun, I’ll let you be the judge.

For a first single after a fairly significant line-up change, “GANG 2” ain’t half bad. The a-side is a solid song, if perhaps a little bit too on the safe side and hey, I think the b-side is both a great and hilarious song so…something for everyone I guess? I do wish we’d get some more songs along the lines of what was featured on the last album though.

I’m kinda noticing a pattern developing recently with GANG PARADE releases in that they tend to put out more conventional singles and then do more experimental things with their b-sides and albums. It seems to be working pretty well for them given the venues they’re filling so I expect that trend to continue for the foreseeable future. Unless the powers at be read this and want to prove me wrong anyway.