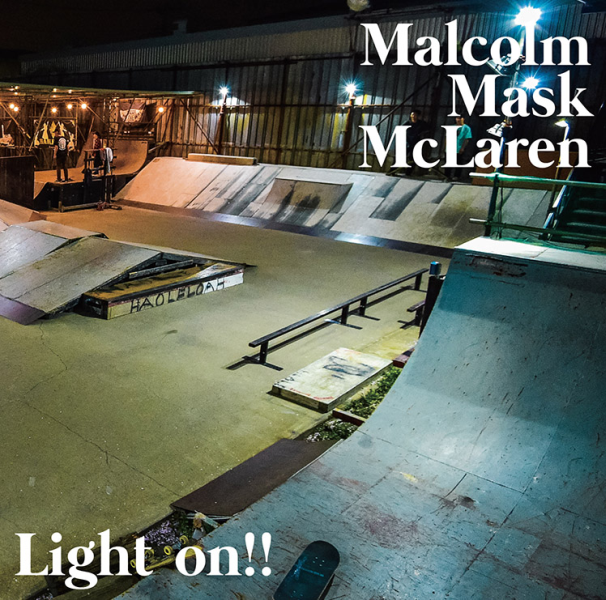 My thoughts on “Light on!!”, the latest single from Malcolm Mask McLaren.

If my math is accurate (I did fail a few classes back when I was in school), I believe we’re just coming up on the 1 year anniversary of some pretty big changes in the Malcolm Mask McLaren camp. I am of course referring to the departure of Nao and the addition of two new members in Kana and Momo. It’s actually kinda hard to believe that its been that long already but I guess the weeks and months just start flying by the older and busier you get in life. Wow was that last sentence depressing, my bad!

Anyway, along with the change in personnel came a rather abrupt shift in musical direction from Malcolm Mask McLaren as well. Up until that point they had been drawing on fairly traditional Punk influences for the majority of the their songs, more specifically the ones from their debut album. Well now it appears that there’s been a transition of sorts into a more skater girl look, as seen with the cover for this CD and the a-side’s MV, and a new found inspiration drawn from Easycore and its related genres. A similar ballpark but a noticeable change in tone.

I’ll be honest, I haven’t exactly been loving the last couple of singles from Malcolm Mask McLaren. Its not that the songs have been particularly terrible, they just haven’t really clicked as much with me as the older material did. It also probably doesn’t help that I listen to a lot of really good Easycore style bands (some of you I’m sure would contend that no Easycore band is “very good”) so maybe I’m holding an Idol group to some unreasonably high standards by comparison. I’m not sure, but I’m always interested to hear anything new Malcolm Mask McLaren puts out so let’s do that now shall we?

Naturally we lead things off with the single’s title track “Light on!!”, which I will now take the opportunity to point out that the MV for said song is rather amusingly 4 minutes and 20 seconds long. Moving swiftly on and I’m already hearing the distinct calling cards of the Easycore genre in the song’s opening bars. If you’re not sure what I’m talking about, pay particular attention to the drumming and hopefully you’ll get what I mean then. It’s pretty by the book in all honesty and that’s not really a bad thing, there was actually a pretty cool breakdown around the two and a half minute mark that certainly perked my ears up. Vocally is where I don’t really get it though. Maybe my system isn’t configured correctly but the vocals seem way too high pitched for the style of music they’re going for, let me know if it’s just me I guess. Kana had a pretty cool solo part at least, which helped break up the repetitiveness of the rest of the song. It’s not a bad song, there’s just some things that still feel a little bit off right now.

For our b-side we have “This World” which somewhat unfortunately ended up being 3 seconds over the 4 minute 20 second mark so I can’t make a follow-up joke about that particular topic. In any case, listening to the opening instrumental of this song very much reminded me of the slower, more Ballad-y songs that A Day To Remember often like to put out. I’m sure there are plenty of other examples but they’re the first that spring to mind. Indeed that’s pretty much the idea behind the whole song really, a kind of mid-tempo Easycore Ballad of sorts…which is probably a horrible way of describing it. There’s another pretty nice breakdown around the three minute mark on this one too. Vocally I think things are a little better on this song, the verses at least feel like they somewhat match with the instrumental but I’m not really a big fan of the chorus here. I guess maybe it goes a bit too Idol-like and kinda threw me off but once again it just feels a bit off for some reason.

I don’t know guys, is it me? For some reason there’s just something that feels a bit off with the vocals on these songs. The instrumentals are great, the lyrics themselves seems fine but the delivery just doesn’t translate well to my ears. I’m very confused right now so if you could let me know your thoughts on this release or Malcolm Mask McLaren’s music in general that might help me out.

Hopefully this review didn’t come across as me being too negative. I do genuinely like Malcolm Mask McLaren and they’re definitely a group that I hope to see at least once on my upcoming trip to Japan. Maybe these songs will sound better to me in a live setting, well vocally at least because I already really like everything else. Guess I’ll find out in a few months if all goes to plan!