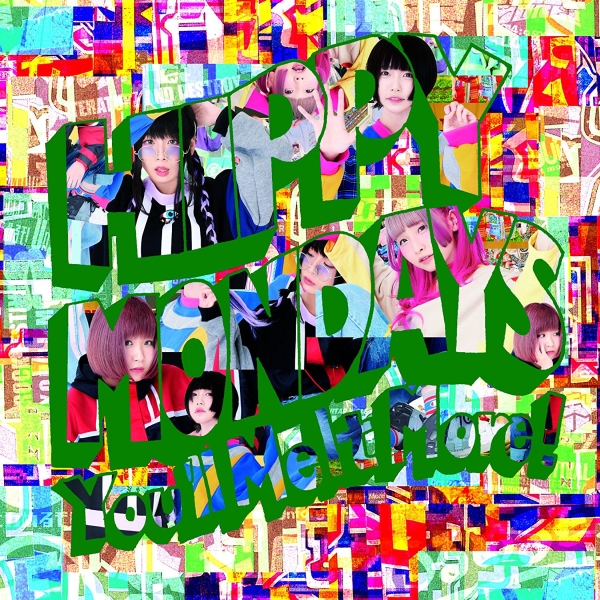 My thoughts on “HIPPY MONDAYS”, the latest EP from You’ll Melt More!

It has been a somewhat quiet first half of 2018 (by Idol standards) for veterans You’ll Melt More!. After celebrating the group’s 5th anniversary in the latter part of 2017 with new album “YOUTOPIA” (review here) and a fairly extensive nationwide tour, things of late have been much more subdued by comparison. Of course Idol groups by their nature never truly take a break for any extended amount of time, it’s just You’ll Melt More! haven’t really had much to make a fuss about this year.

Well that’s all changed now, with the group appearing to be making up for 2018’s slow start with a double release of new “Best Of” album “Ongaku yo Maware!! Music Go Round -Yuru Best!-” and the release I’ll be writing about today “HIPPY MONDAYS EP” (yes, the title is a Happy Mondays parody). I don’t really ever write reviews of “Greatest Hits” releases and stuff like that, so sorry if you were hoping for one here. If you do happen to just be checking out You’ll Melt More! for the first time though then the aforementioned release would certainly be a good place to start. It has a really good selection of their recent output.

Getting back to the review at hand, and I’m probably about to sound like a broken record. I really don’t know what to expect from this one, which is pretty much how I feel coming into all new You’ll Melt More! releases. It’s pretty fun but can also at times be a bit disappointing because I prefer certain styles of You’ll Melt More! songs to others. One thing is for sure though, You’ll Melt More! march to the beat of their own drum, and that’s part of their charm. Let’s start the review.

Things start off with “Okoranaide”, a song that opens with a fairly pleasant and somewhat Jazzy instrumental with just a touch of record scratching for foreshadowing purposes. This instrumental underpins pretty much the entire song bar the breakdown where they abuse that poor Jazz record and the record player it’s playing on. I’m kinda getting into this style music in the past couple of years so I don’t really mind what they’re going with here but if you’re looking for something a bit more Poppy and high tempo then this isn’t going to be for you. Vocally everything is pretty okay I guess, nothing that’s going to knock your socks off but it works with the instrumental and the chorus grows on you quite a bit after a few listens in my experience. I do kinda feel like we’ve heard this kind of thing from You’ll Melt More! quite a bit now though.

“Yasumou” is our second track and I’m honestly not sure what they’re trying to go for on this one. The songs starts out with a pretty nice acoustic guitar riff but then we’re layering on tribal drums, waterfalls and a really not great sounding…synthesizer I think? This is all within about the first 60 seconds of the song and no one has even sung a note yet. Things get a little less chaotic once the vocals do actually kick in which is good but it’s not really the most engaging thing in the world. You get a few moments of personality here and there sure, but other than that it’s just sort of okay like the last track. There is a pretty interesting guitar solo around the 3 minute mark though so at least that’s something. I dunno, maybe I’m being a bit too harsh on this one but sometimes You’ll Melt More! go a bit too far out there, even for me.

Our third and final track save for the obligatory instrumentals is “Freestyle Zenbu”. This song is a duet of sorts between You’ll Melt More! and DOTAMA who is a fairly well known Hip-Hop MC in Japan. When the song first started I thought that maybe this one would be more along the lines of the You’ll Melt More! I enjoy but that didn’t last long. “Freestyle Ballad” might have been a better title in retrospect. Once again this isn’t a particularly bad song, all of the girls handle their parts well and of course DOTAMA does everything asked of him to a high standard. It just isn’t grabbing me, even with the song being almost overly repetitive. Don’t get me wrong, I know these girls aren’t Rappers and I’m not expecting them to spit crazy bars or anything like that. I just think they could have put a few more bells and whistles on this one is all.

Well, my assertion that you never really know what you’re going to get from You’ll Melt More! seems to still be holding true. For me personally this was another fairly middling release, but there were some cool or interesting moments here and there so I did find some things to enjoy. I just wish they’d put a slightly more uptempo song on here to mix things up a little more.

This review probably hasn’t convinced anyone who wasn’t already thinking about it to actually go check out You’ll Melt More! but once again I really do recommend their recent “Best Of” album. Even though some of their output might not appeal to my personal tastes, taken as a whole You’ll Melt More!’s discography is probably one of if not the most diverse in Idol so you’re sure to find something in there to enjoy.