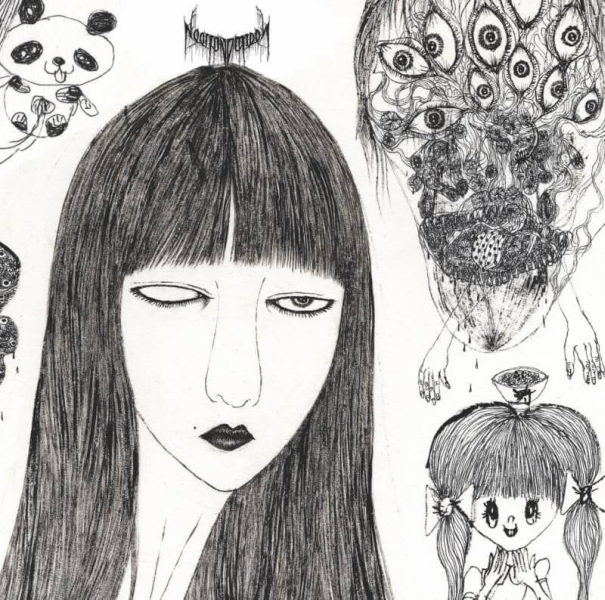 So, how many of you correctly guessed that I would be reviewing the remastered version of “IKOTSU MOUFUBUKI” for the NECRONOMIDOL part of this 3 part series of reviews here? Probably most of you I’d imagine but just in case…surprise! Also, big thank you to Mr Lunatic Dawn on Twitter for picking me up a copy of this CD as it was a Tower Records exclusive (or available as a digital download on Patreon for a very limited time). Very cool that Tower allowed NECRONOMIDOL to put out this release but also slightly inconvenient for those of us who are part of the group’s international fanbase. I guess it really does pay to have connections.

Why am I reviewing this release you ask? Well, partly because it’s my website and I can write about whatever I want but moreso because NECRONOMIDOL are going to be arriving in the UK imminently to begin their “Black Winds Over Albion” tour (tickets here). They’re bringing along company this time too in the form of 2& and Screaming Sixties/Zekkyou Suru 60do and I figured a good way to hype it up a little bit would be to review a recent release from each act. You can read my reviews for 2& here and Screaming Sixties/Zekkyou Suru 60do here respectively. Definitely check both of the other acts out if you have the time and want to be fully prepared for the shows.

Getting back to the single I’m going to be reviewing today, this is a remastered/rerecorded version of NECRONOMIDOL’s very first single “IKOTSU MOUFUBUKI” released all the way back in 2014. Obviously the vocals have been updated in line with the current member line-up and I believe the instrumentals have also been spruced up some as well. I’m not typically one for retreads but the release of this CD has seen “VULTURE” make its way back into the NECRONOMIDOL setlist and I’m particularly fond of that song so that’s already a win in my book. Let’s see how the updated version of this single stacks up to both the original and current NECRONOMIDOL material.

So “VULTURE” is the lead track and right off the bat it’s pretty apparent that things have undergone a pretty significant overall in pretty much every department. I personally didn’t mind how Lo-Fi the original sounded compared to a lot of other people but those people will be very pleased to hear that this song has been cleaned up greatly for this re-release. The production is much crisper while still maintaining the ritualistic vibes of the original and the instrumental as a whole still has a great spooky Synth-Pop thing going on, something I personally wouldn’t mind NECRONOMIDOL revisiting for future material.

Vocally things have also undergone quite a big change, again largely on the production side with clearer tracking and such, but you also have to remember that this is a vastly different (and significantly upgraded if you ask me) line-up from when this song originally came out. In addition to new voices, there are also some new vocal parts that I don’t remember hearing originally. It’s mainly during the chorus that you notice it the most and I think these changes really do make for a better song too. It’s not often I can say that I like a re-recording better than the original but this is definitely one of those rare cases.

And just like on the original release, “Atai no Tsumeato” follows. Now this song is a bit of a rarity as far as live performances go, with the video above from a few weeks ago being the first time NECRONOMIDOL had performed it in a long time. If you’ve listened to the original it’s easy to understand why. An out of date vocal track coupled with a musical style that NECRONOMIDOL haven’t really explored very much since and the pieces fall into place. I don’t personally think it’s too out of place if you’re comparing the song to current material but maybe I’m a bit bias as I do have a soft spot for this song too.

I’d say this song sticks a little closer to the original than “VULTURE” but it has undergone a similar rework in terms of both production and vocal tracking. That being said, if you didn’t like how the vocals sat in the mix on the original then this new version is unlikely to win you over as that particular production choice remains. Albeit once again with much improved vocals. I liked it the first time and I still like it here. What I really loved though was the reworking of the opening instrumental, the synthesizer and the recorders are so crisp and clear that it really adds that little extra something that was missing originally. Once again, I like the new version better than the original and that’s pretty damn awesome after all these years. 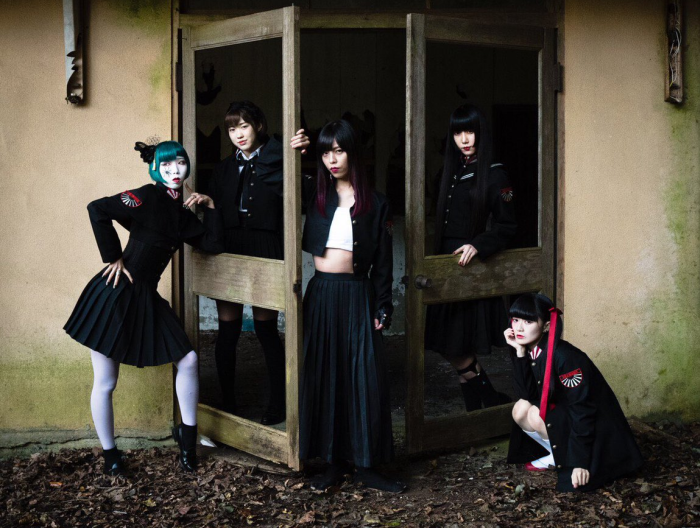 As far as re-releases/recordings/whatever of past works go, “IKOTSU MOUFUBUKI” pretty much knocks it out of the park. I think this single serves as a pretty cool marker for just how far NECRONOMIDOL have come as a group since their debut and who knows where things will go in the next 4 years if they keep improving at this rate. Only time and maybe the Great Old Ones will tell.

I don’t have to be a Great Old One however to tell you that NECRONOMIDOL will be arriving on the shores of the UK in a little over a week and a half to commence their Black Winds Over Albion tour. I hope to see some of you at the London date for what is sure to be an awesome show (tickets are still available) and who knows, if this tour does really well then it might open up the UK market for other cool things in the future. Wouldn’t that be fun?