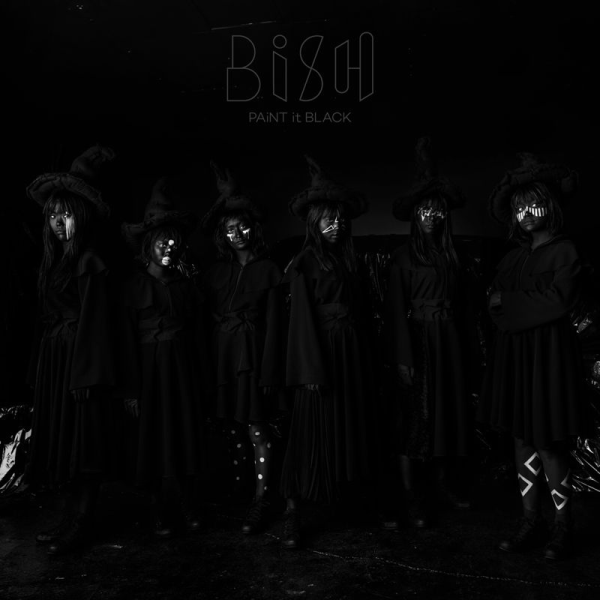 My thoughts on “PAiNT it BLACK”, the latest single from BiSH.

Spring has just about arrived for most of us and with it comes a new BiSH single, their first release of 2018 as a matter of fact. It follows the release of the group’s second major label album “THE GUERRiLLA BiSH” (review here) last November, a release that received a fairly mixed reaction from the people in the circles I tend to run in these days. A watershed moment for BiSH fans in the Western fandom or expectations being set too high perhaps? I’m not sure, I thought the album was decent enough personally although it didn’t have too many “Wow” moments either.

Back to the matter of this new single though, it’s called “PAiNT it BLACK” and no it is not a cover of classic song by The Rolling Stones unfortunately. As if that wasn’t unfortunate enough, this release has been surrounded by a bit of controversy in the Western fandom. Turns out if you cover yourself in jet black paint you’re being incredibly racist or something. It certainly couldn’t have been done as a callback to one of the themes of the Black Clover anime that this single’s title track serves as the ending theme for. That would be too boring and no one would be able to virtue signal about it and make themselves feel good either. Seriously, if you thought BiSH were being racist lose my fucking number, thanks.

My dislike of SJW nonsense aside, like I briefly mentioned earlier this single’s title track is being used to promote an anime. In my experience this puts a ceiling on what you can expect because you can’t really go balls to the wall on something that has effectively been commissioned by another company. “But Garry! Avex have no input on the musical direction of BiSH!” I hear you say. Well, we’ll find out pretty soon here won’t we? Perhaps I’m tempering my expectations too much but I’m really only expecting the a-side to be a decent BiSH song that doesn’t try to push the envelope too much. As for the b-side? Well that’s probably going to be the more interesting of the two tracks. Let’s find out if I’m right.

So, we’re starting off with “PAiNT it BLACK” of course and things get off to a pretty good start. I’m definitely enjoying that little guitar riff they’ve got going there. Unfortunately after that things drop off quite a bit, and I’m not just talking about my interest here either. Yeah, this is decent BiSH song like I thought it would be coming in. There’s absolutely nothing wrong with it, but for me I feel like I’ve heard this a bunch of times already with different titles. If the anime company asked for a BiSH sounding BiSH song then full marks for that because that’s what this is. If you’ve heard anything BiSH have released in the past 12 months or so then this is more of the same. If you like that then you’ll love this song, and if you’re getting a little tired of how the music has been sounding lately then this isn’t likely to help. Worth checking out for the guitar riff and I wouldn’t be reaching for the skip button in a playlist but fairly unremarkable otherwise.

Anyone hoping for something a bit more adventurous out of the single’s lone b-side is likely to be disappointed once again by what’s on offer. Much like “PAiNT it BLACK”, “SCHOOLYARD” is by no means a bad song…it just feels like we’re retreading old ground. It’s a “Punk Ballad” in a similar vein to past efforts such as “VOMiT SONG”, which once again I have to stress doesn’t make it a bad song. Everyone’s vocals are on point, the Rock instrumental has the appropriate tempo for the way the lyrics are delivered, there’s nothing technically wrong with anything. Well, I’m not that fond of the chatter they put on the track but it’s not like it’s the end of the world either. It’s just the song isn’t very exciting to me, and it probably isn’t helped by the fact that I share a similar view of the a-side. I know I’m repeating myself when I say this, but if you’ve heard anything that BiSH have released in the past 12 months then this is very much in keeping with that. Whether you’ve been desperate for more or would have liked a bit of a change is of course down to personal preference.


If it isn’t clear by now, I’m not exactly in love with this single. Let’s be honest, it would be incredibly difficult for BiSH to have a truly bad release at this stage of the game, given their major label status and the kind of production budget that comes along with all of that. It doesn’t mean that they can’t put out a boring release though, and that’s probably the word I would use to best describe my feelings towards “PAiNT it BLACK”. Two well produced and performed, albeit rather unexciting songs. It is what it is.

Can anyone else hear pitchforks being sharpened or is it just me? Anyway, BiSH have already announced their next single and there are previews of both tracks already so feel free to hunt those down if you’d like. The single is titled “Life is beautiful / HiDE the BLUE” and it releases on June 20th. I will of course have a review up closer to the release date but I think this is another tie-in single so we’ll see how that goes I suppose.