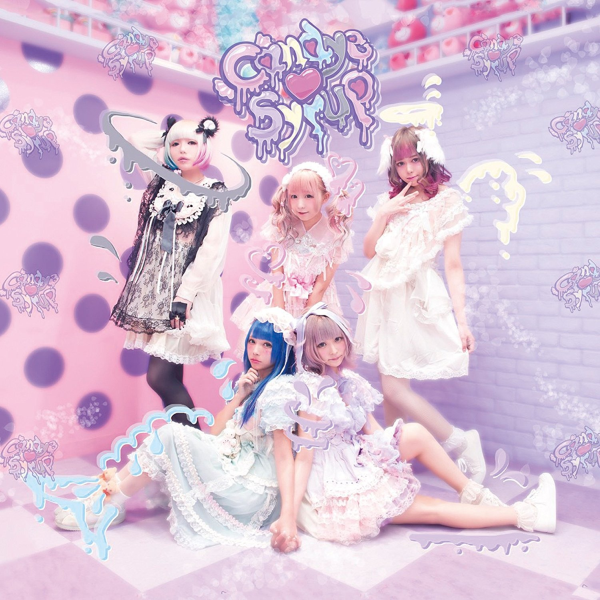 My thoughts on “iDOL CAN DYE SICK ROCK!!”, the first mini-album from Candye♡Syrup.

Boy have I been wanting to write about Candye♡Syrup (that ♡ is so annoying to type by the way) on the site for a long time now. Unfortunately they haven’t made it the easiest to get your hands on their music until recently so I guess I’m a bit behind the times on showing them some love. Although to be fair, I did go see them perform live when I was in Japan back in November so while I might be late writing about them I’m also probably one of the few people to have experienced the madness in a live setting. I’ll take that trade-off.

So, Candye♡Syrup are named after a pretty famous hair salon in Harajuku which is owned and operated by a man by the name of IKU who has some pretty interesting fashion sense. Basically the group is sort of like a marketing tool for the salon I guess, but they’re actually a pretty serious production musically so it’s by no means a cash grab situation. Eagle eyed readers might recognize Non of Deep Girl fame on the cover there, so maybe that gives you a hint as to what to expect if you’ve never heard Candye♡Syrup’s music before today for some reason.

“iDOL CAN DYE SICK ROCK!!” is Candye♡Syrup’s first mini-album and probably their most widely publicized and available release to date. If you take the cover at face value you’re probably thinking they’re a cutesy Denpa Pop group but it won’t take too long here before you see the real face of Candye♡Syrup. I’m obviously not coming into this release totally blind, but there’s a decent chunk of new material I’m eager to check out. If it’s anything like what I’ve heard and seen previously then it’s going to be a heavy but also pretty cute ride.

“Candye♡Syrup” the song opens up proceedings, and that death growl right at the start should shatter any illusions anyone might have about this being a sickly sweet Denpa Pop project. Well, I say that but there’s plenty of elements of the aforementioned genre in here too. It’s just all mixed together with some pretty hard hitting EDM beats and lots of shouting and growling courtesy of Non. The clean vocals aren’t half bad either to be fair, and the chorus is catchy enough to be getting by on. You can tell that the song has been written by people who know what they’re doing as the structuring is totally on point. Considering a decent chunk of the lyrics are advertising for the salon the group are named after, this is actually a pretty good song.

You know what, for a song titled “SCREAMING CRAZY WORLD” there sure wasn’t a whole lot of screaming in play on the mini-album’s second track. What little there was on show was very technically impressive however. Also impressive is the song’s instrumental, which combines sweet synthesizer beats with an epic sounding Metal composition that gives things a really grandiose feel. Unfortunately, the vocals have the rather thankless task of trying to compete with all of this and while they do so valiantly there are times where they do get overwhelmed. It also doesn’t help that there isn’t the strongest of hooks to be used as a means to cut through the soaring instrumentals. An enjoyable song, but moreso for the instrumental for me personally.

Now I know I said that cutesy Denpa Pop wasn’t exactly Candye♡Syrup’s thing, but the opening verse or so of “C♡S.I.S” would probably have most people fooled for a little bit there. Although to be honest, this song is actually pretty conventional in the vocal department as far as Candye♡Syrup songs go. Well, besides from the parts where Non once again tears it up on the mic anyway. This song is in a lot of ways rather similar to “SCREAMING CRAZY WORLD” that came before it. It suffers at times from the vocals having to fight against the raw power of the instrumentals, but on this song I think the chorus is a good bit catchier which is a plus in my book. It was kinda cool how they incorporated some Chiptune elements as well. That slide whistle drop during Non’s solo was pretty unexpectedly hilarious too.

“SWEET SUICIDE” is a perfect title for a Candye♡Syrup song, and it’s also a perfect song to mark the mid-point of this mini-album. We all have those moments when we know we’re going to love a song just from the opening few seconds of the instrumental right? Well that was me with this song anyway. It started out so smooth then morphed into a high tempo rave song with the obligatory moments of guitars, growls and the like. The clean vocals on this song reminded me of early to mid 2000s Japanese Trance/Techno/whatever you want to call it which was a nice shot of nostalgia. I was also vaguely reminded at times of NECRONOMIDOL’s Darkwave material, which I’m not sure where my brain pulled that from. Anyway, this is a fantastic song and doesn’t even have that much screaming.

It’s pretty hard not to draw the obvious comparisons between the instrumental on “Secret Doll” and the sort of composition that you might hear on a typical PassCode track. Well, crazy breakdowns aside anyway. Maybe that makes some of you more or less likely to check this song out, I’m not out here trying to tell anyone how to live their life. What I will say though is that the vocal side of this is actually pretty enjoyable, and I like that everyone has such distinct singing voices as it cuts through the more…by the book parts of the song. I also really like the chorus, which is perhaps somewhat surprising given that it’s not the typical hook laden affair that I’m usually raving about. I don’t know what to say, I just really like the song…even if it is PassCode-esque.

Candye♡Syrup enlist the talents of guest vocalist m!sa (ex. Story of Hope) for the mini-album’s penultimate track “IDOL OF DEATH”. It’s easy to understand why, because this song is HEAVY…well the chorus is actually pretty normal by J-Pop standards, but still! I guess you could describe this as a Melodic Hardcore song and not have too many people argue about it. Purists probably aren’t going to be wild about how Poppy the chorus is, but I thought it created a really striking contrast when juxtaposed against the verses. I also really loved the Hardcore Punk inspired instrumental, it sounds sort of like something Gallows and bands of that ilk would perhaps produce. Very cool stuff, I would certainly like to hear more of this sort of material.

To close out the mini-album Candye♡Syrup throw the ultimate curveball in “IDOL DEATH SKA !?”. Show of hands everyone, who would have guessed that there would be a Ska song on this release? Not many of you I’ll bet. Now, it’s not the horn filled affair that you’re probably thinking of and there’s a good smothering of heavy drumming and meaty guitar riffs…but at its core it really is a Ska song. Sorry, I’m totally thrown for a loop here. Anyway, if you can’t appreciate that then maybe you can appreciate the bit in the song where they sing “Fuck You!” as cutely as possible then proceed to flip off the camera in the music video. I absolutely adore this song, it’s probably my favorite Candye♡Syrup song in fact. How much more do you want me to sell it to you? Go listen already!

Candye♡Syrup strike a pretty nice balance between sugary sweet J-Pop and the more hardcore of the music genres. I don’t think anyone would argue that they’re breaking new ground with what they’re producing, but it’s clear to see that the people involved in the project know what they’re doing and are passionate about it. Sure, there’s a few production things that I picked out that could perhaps have been a bit better but it’s by no means the end of the world.

If you enjoy your music on the heavier side and/or you’re looking for a new group with some fun songs then you should definitely check out Candye♡Syrup. I know I’m looking forward to whenever they’re going to put out their next CD and I certainly think that they’re a group to watch out for in 2018. Come on, take a listen, the Spotify playlist is right there!