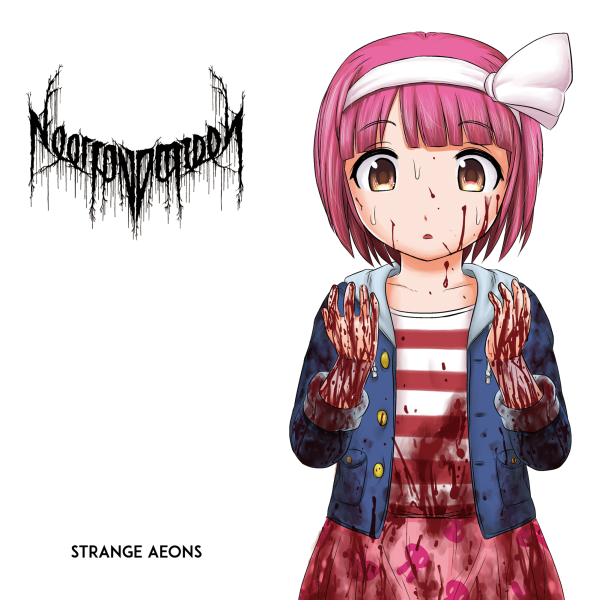 My thoughts on “STRANGE AEONS”, the new single from NECRONOMIDOL.

Bet you didn’t expect this review to go out this early did you? Well, you probably did seeing as a bunch of other sites have likely said their piece by now but whatever! NECRONOMIDOL have once again been very kind and provided me with an advance promotional copy of their upcoming single “STRANGE AEONS” for me to share my thoughts on. As you all know I’m not one to go out of my way to ask for such things but they are greatly appreciated when offered. Indeed, it is always a pleasure to work with NECRONOMIDOL when the opportunity presents itself but don’t think for a second I’ll be pulling any punches with this review here (like you don’t already know that by now).

For those of you who don’t know, NECRONOMIDOL are an Idol group who employ the use of genres that are seldom seen elsewhere in the scene. I’m talking about things like Darkwave, Black Metal and New Wave of British Heavy Metal to name only the most prominent. Their lyrical content is also heavily based in HP Lovecraft’s Cthulhu Mythos so you’re sure to see plenty of references if you’re familiar with that world. Like I said, NECRONOMIDOL like to take the path less traveled by other groups and they’ve had great success in carving out their own corner of an increasingly saturated market.

“STRANGE AEONS” comes in two versions (DIRGE and PAEAN) and sees the group attempt to continue the momentum that was built with 2017’s “DEATHLESS” (review here) and “DAWNSLAYER” (review here) releases. Momentum that saw them launch an international fanclub and play shows in Asia, Europe and North America as the first stage of their plans for world domination. Plans that are to be expanded on in 2018 if what I’m hearing and what has been hinted at are even half true. That’s getting much too ahead of ourselves though, we still have the matter of this review and what Lovecraftian horrors await us in these “STRANGE AEONS”. 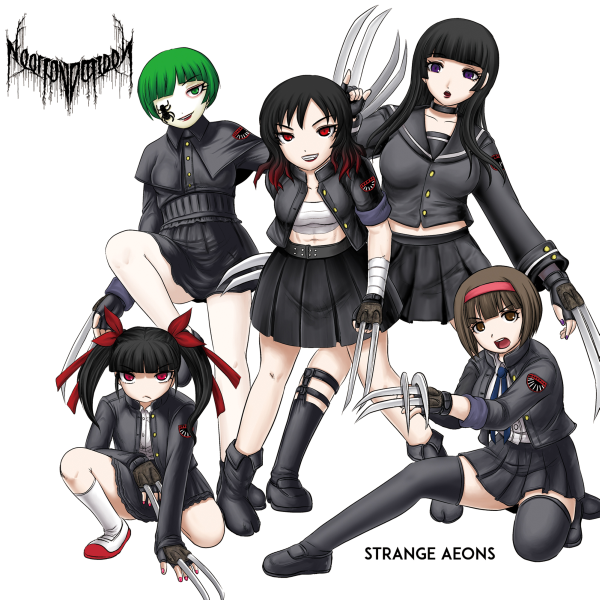 Title track “STRANGE AEONS” is a song that at its core is about humanity falling into darkness and the world itself eventually falling into the abyss. Sounds about right for a NECRONOMIDOL song. This particular track is a collaboration with the band Kiba of Akiba (BABYMETAL and anime fans might recognize that name) and it does come through in both the instrumentals and the vocals. This song should be a little more palatable to the wider public while still retaining what makes NECRONOMIDOL who they are. I particularly enjoyed the very catchy chorus on this one, sung entirely in English by the way. Backers of the NECRONOMIDOL fanclub on Patreon can listen to this song right now, so what are you waiting for?

“WITCHING HOUR” is the main, non-version exclusive b-side on the single and is composed by Zero-2 of the Osaka based Punk band Poikkeus. In case you couldn’t quite make it out, the main theme of this song is sacrifice, dark rituals and other witchy type things. If you thought “STRANGE AEONS” wasn’t quite the NECRONOMIDOL you fell in love with then this song should more than make it up to you. They’ve wrapped up a Punk instrumental in a creepy vibe which is made instantly apparent in the opening moments of the track. Vocally it seems like NECRONOMIDOL just keep getting better and better, be that the hauntingly beautiful melodies or the way everything has been layered together on the production side of things. This is my personal favorite track from this whole single, spoiler alert I guess.

Moving on to the version specific tracks and first we have “dirge of baldr”, a song about war, death and other such pleasantries which logically enough is exclusive to the “DIRGE” version of the single. NECRONOMIDOL have enlisted another new songwriter called Takeru for this one, who has provided us with what at times is almost a too upbeat Darkwave bop. That’s one opinion you could have of this song at least and I can see where people might be coming from if they were to think that. This isn’t the most conventional of NECRONOMIDOL songs, but juxtaposed against a single where they’re trying out a bunch of new things and it’s easier to see where they’re coming from with this one. The vocals are fantastic and I’d challenge anyone to say the song itself isn’t great, despite their own personal preferences.

The song exclusive to the “PAEAN” version of the single is “BLOODWINGS”, composed by longtime NECRONOMIDOL collaborator Azusa Iwanaga who is responsible for many great NECRONOMIDOL songs. More musings about ravaged worlds, bloodshed and the glory of death are abound in a song that should provide fans with a warm blanket of familiarity. Rapid-fire drumbeats, catchy guitar riffs, a quick tempo, all of the Iwanaga hallmarks are present on this song. Also present are yet more fantastic vocal performances by all of the girls as well as some beautiful piano playing. While exploring new avenues it is never a bad thing to remember and acknowledge your roots. This song is up there with “WITCHING HOUR” when it comes to my personal ranking of songs from “STRANGE AEONS”. 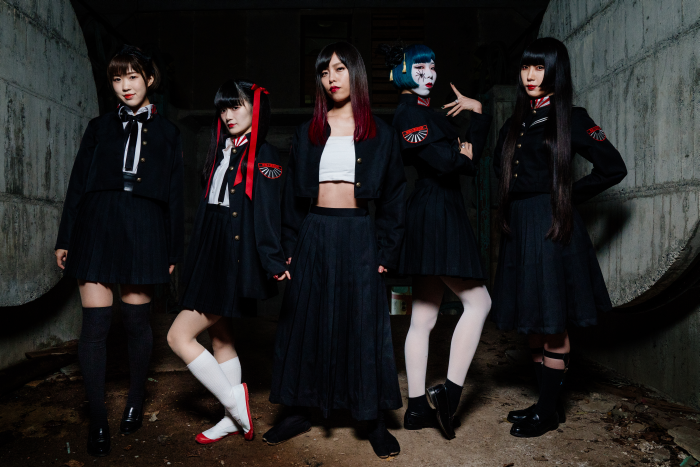 I think it’s fair to say that NECRONOMIDOL tried a number of new things on this single, and all of them were pulled off fairly successfully in my book. Of course if you’re into a particular style of NECRONOMIDOL’s music (Black Metal, Darkwave, etc) then some will obviously appeal to you more than others but hopefully we can all agree that constantly trying to evolve and perfect things is not a bad thing in the slightest. That’s how I choose to look at things anyway.

“STRANGE AEONS” releases January 17th both physically and digitally. Physical versions of the release (“DIRGE” and “PAEAN”) will be sold for 1000 yen each through the usual online and retail outlets or you can pick up all 4 tracks digitally for 1000 yen via NECRONOMIDOL’s Bandcamp, iTunes, Amazon, Google Play and various other platforms. As previously mentioned you can listen to title track “STRANGE AEONS” right now by backing NECRONOMIDOL’s fanclub on Patreon.