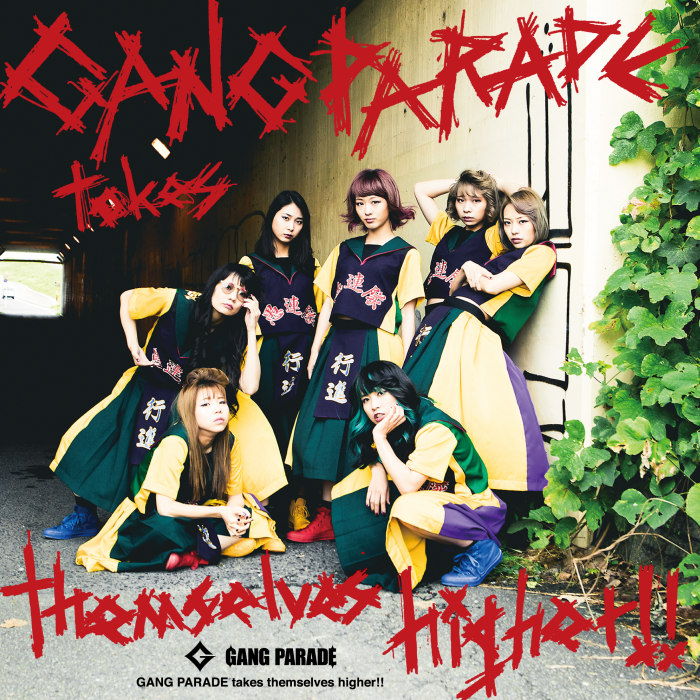 My thoughts on “GANG PARADE takes themselves higher!!”, the third full-length album from GANG PARADE.

Have I ever told you guys how much I like GANG PARADE? Oh, I have? Well I guess we can skip over that part of the introduction to this review then. I’m also not going to continue to beat the dead horse that is making fun of the silly people out there who make bold claims such as “GANG PARADE are irrelevant without Saki” or “GANG PARADE have no fans”. Unlike some other people out there in the fandom, I know when to put a dying meme out of its misery. I’m sure none of you care about any of this stuff though so I’m going to shut up now and actually start introducing this review for real.

GANG PARADE have been rather quietly having a very solid 2017. Not only did they release two singles in “FOUL” (review here) and “Beyond the Mountain” (review here) but they’ve also been touring extensively and showing up on all manner of smaller shows several times a week for good measure. I was able to see them 3 times (could have probably been about 5 or 6 if I wanted to) while I was in Japan without even trying, including a sold out one-man live at Ebisu LIQUIDROOM. They’re now looking to round out the year with the release of this album that I’m going to be talking about today.

“GANG PARADE takes themselves higher!!” is GANG PARADE’s third studio album, although technically it’s the second since the name of the group was changed to GANG PARADE from POP in 2016. This is also the first album to feature Aya Eight Prince in place of Kamiya Saki, as their temporary trade is still in effect…for now at least. The album is a little slim, containing just 10 songs with 3 coming from previous releases. GANG PARADE have also been a bit of a guinea pig for WACK in the past, getting all manner of different styles of songs so it’s hard to tell what to expect here. In any case, let’s find out if GANG PARADE really do take themselves higher with this album or not.

The album kicks off with “Imi nai Uta”, which is a brand new song. It’s instantly very different sounding from pretty much all of GANG PARADE’s previous output, so I guess the experimental kick is continuing. The song is very in your face, with a drum and bass heavy instrumental and some pretty aggressive sounding gang (heh) vocals. Truth be told there isn’t a whole lot of singing on this track, and I’ve seen some debate as to whether this should really be considered a song or not. I think that’s a pretty silly view to hold personally but to each their own I suppose. For me, this song is pretty catchy and it’s also a bit different from what’s going on in the Idol space currently. It’s not going to be everyone’s cup of tea but it works for me.

Next up we have “GANG PARADE”, GANG PARADE’s very own self-titled song. It’s actually kind of funny because if you look at the tracklist there are actually two self-titled songs on this album. That’s kinda neat to me for some reason, I’m probably just too detail oriented though. It follows a fairly similar outline to “Imi nai Uta” but I think even the most miserable of people would have to concede that this is a “proper” song. The chorus hits especially hard and there’s even a hint of harsh vocals in play too which I know some of you are interested in. It’s kinda nice to hear GANG PARADE getting a bit of a theme going to their music. Just don’t go around calling it “Noise Punk” or something equally stupid, will ya?

Man, these English song titles are getting out of control. Now we’re going for full sentences or even questions in the case of “Are you kidding?”. This one is definitely much softer than what we’ve been treated to so far on this album. It does still kind of follow the overarching theme that we’ve established though so it’s definitely not out of place. I was actually very interested by how unpolished the vocals sounded at times on this song. I think it added a little extra something but your mileage may vary. I’m actually still trying to decide how I feel about this song. It’s a little bit middle of the road but the chorus is actually quite decent and the main synthesizer melody is quite catchy. Yeah, this song ain’t half bad.

I know I make a big deal about English song titles, but I guess they’re fine if you’re just going to otherwise name a song “Futsuu no Nichijou” or “Ordinary Daily Life”. There’s absolutely nothing ordinary about GANG PARADE busting out a retro sounding New Wave track though, I can promise you that. I was a little negative of GANG PARADE being the WACK guinea pig, but that’s probably what got me this song so I guess I shouldn’t complain too loudly. I love everything about this song, which is probably surprising to those of you who have actually listened to it because it’s quite slow and such. The vocals are like butter though and this is a perfect showcase of each member’s vocal talents. Oh yeah, the chorus is pretty catchy too which doesn’t hurt. Our theme appears to have been torpedoed however.

We finally hit some previously released material in the form of “FOUL”, which marks the midway point of this sorta on the short side album. This song came out as a single back in April and you can go bore yourselves to death by clicking here to read my full review of it. Again this is a song that really shows off the vocal talents of the members. Also of note is that we’ve got Aya in the mix here instead of Saki, which I’m not going to pretend makes a massive difference, but there’s definitely one there. I feel like I wasn’t appreciative enough of this song in my initial review and it did admittedly take a little bit of growing on me but now it’s one of my favorite GANG PARADE songs. My assessment of the song “BODY&7SOUL” being super fun to sing along to live was also correct in case anyone was wondering. My source is pretty bias though.

“I need you I love you I want you”…heavy rotation! Oh wait, wrong group and definitely the wrong song, my bad guys I got a bit carried away there. This song starts out a bit on the slower side but it gets going pretty quickly with a transition into some verses with a bit of faux-Rap going on. That’s the structure of much of the song, slower more deliberate verses that build into something more upbeat before diving into the chorus. Speaking of the chorus, it really is a thing of beauty. It doesn’t try to be catchy in the most conventional of ways but it definitely lodges itself in your brain after a while. I also imagine that this song has to sound pretty epic when performed live, makes me kinda sad they didn’t play it on any of the GANG PARADE shows I went to while I was in Japan.

Up next is “Plastic 2 Mercy” which is arguably GANG PARADE’s most iconic song and from what I’ve seen, the most well liked among the western fandom. Once again we have Aya in place of Saki, but the difference isn’t really anything to write home about and the song doesn’t appear to have been altered much besides that. I wrote a review of the original rerecording of this song that happened at the tail end of last year, that you can read by clicking here. I’m likely telling the majority of you something that you already know, but “Plastic 2 Mercy” is a fantastic song and definitely deserves a place on this album. If you for some reason haven’t heard it yet then do yourself a favor and rectify that as soon as you possibly can.

I have previously made the observation that the WACK production team have had a bit of an infatuation with what I would call macabre inspired instrumentals recently. Well that kind of continues here with “TIE”. Sure it’s really subtle and not as in your face like with BiS or BiSH, but those violins and the creepy vibe you get from the slower parts of the song feel eerily familiar. Vocally things sound similarly melancholic until we hit the chorus where things start to sound a bit more passionate. This one is pretty different to everything we’ve heard so far, which I think is what makes it so interesting to me. Perhaps on its own I might not actively seek it out, but as part of this album it really did hold my interest quite well.

For the album’s penultimate song we’re treated to another oldie (it’s not that old) but a goodie. I am of course talking about “Beyond the Mountain”, which was considered to be quite experimental when it came out but after listening to some of the songs on this album I’m not so sure about that now. This was the first single to feature Aya instead of Saki, so from what I can tell they haven’t done anything to this one for the album release. You can read my review for the single by clicking here if you’d like. I was a little lukewarm on the song when it came out I think it would be fair to say, but I’m 100% on board with it now. Parts of it might not be to everyone’s taste, but then again you could probably say that about most of the songs on this album.

We close things out with “CAR RADIO” which at a hair over a minute and twenty seconds long feels both criminally short and also like a song idea that wasn’t fully formed but was tacked on when they realized they only had 9 tracks finished and a deadline to meet. What we did get was really enjoyable and I actually dig the flow they’ve got going with the vocals. I also think that might be Watanabe singing along in the background there which is pretty neat. I don’t know guys, there’s not too much to say about this one since it’s so short. I guess my main takeaway is “I want more” which makes part of me think that someone over at WACK took the phrase “Always leave them wanting more” a bit too literally.

I think it’s definitely safe to say that GANG PARADE have indeed taken themselves higher with this album. They’ve got a slam dunk for my Top 10 Albums of 2017 at least. Sure, we’re still in the lab experimenting with things but it did feel like we had a slightly more cohesive theme going on this time out. If the first couple of songs are indicative of where we’re going moving forward then I’m pretty happy with that.

Speaking of going forward, GANG PARADE have already announced a follow-up single titled “BREAKING THE ROAD” which is slated to be released on February 20th. They’re also touring in support of it from late January through the end of February so if you’re in Japan maybe go catch a show or something. Meanwhile I’ll be impatiently waiting to hear what GANG PARADE have in store for us next…oh yeah, Saki and Aya might be getting traded back too.