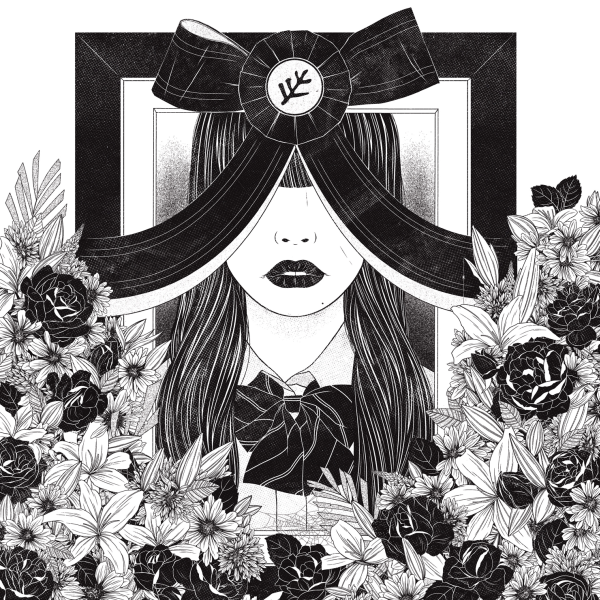 A not very exclusive preview of the upcoming vinyl release of NECRONOMIDOL’S “DEATHLESS”.

I’m sure you’ve probably seen or are going to see a few articles about this from various websites in my small corner of the internet, so thanks for taking the time to check mine out! The very nice people over at Specific Recordings, a vinyl record label based out of Metz, France, have provided me with a promo copy of their upcoming vinyl pressing of NECRONMONIDOL’S “DEATHLESS”. I’d actually been planning on buying it anyway, so being able to get it early and being thought highly enough of so as to be asked if I’d like to write a few thoughts about it is pretty cool. I guess technically this is a sponsored post, but I have been given no direction or any winks and nudges over what to say so rest assured any thoughts will be my own. Once again, thanks to Specific Recordings for being generous and making this all a possibility.

I actually already reviewed NECRONOMIDOL’S “DEATHLESS” for the site back in March so I’m not actually going to give you another blow by blow account of it here. Please do go and read the review by clicking here if you haven’t already. A quick summary of my thoughts on the album would be that I found it rich in both atmosphere and Lovecraftian references and the quality of the songs was top notch too. It was a very clear progression from their first album “NEMESIS” (review here) and you could tell that the new members of the group (Tsukishiro Himari and Imaizumi Rei) were a big part of that on the vocal side of things. I haven’t started my Top 10 Albums of 2017 list yet but if you’re a betting person, it’s definitely a favorite for a spot on there.

Now, what I can talk about is how the songs sound on the record itself. Although I do always find it a bit odd talking about vinyl records because a lot of it really is subjective. A lot of it also really comes down to what sort of kit you’re working with but we’ll leave that subject alone. For me personally, I love vinyl because not only is it a tangible thing but I feel like well pressed vinyl adds a lot to the listening experience. That’s what I feel here too, and while I’m not going to lay it on thick and say the differences are night and day, you do definitely get a lot more out of the songs than you do from the digital or CD versions. That’s how my ears heard it on my setup at least. Also, who doesn’t love blasting NECRONOMIDOL through some speakers? I guess what I’m really trying to say is if you’re already predisposed to vinyl and NECRONOMIDOL then this release will not disappoint you.

So what exactly are you getting as part of this package? Well, I snapped a few photos of everything I was sent so you guys can see exactly what you’re getting for your money (sorry for the non-hi-res, non-4K images): 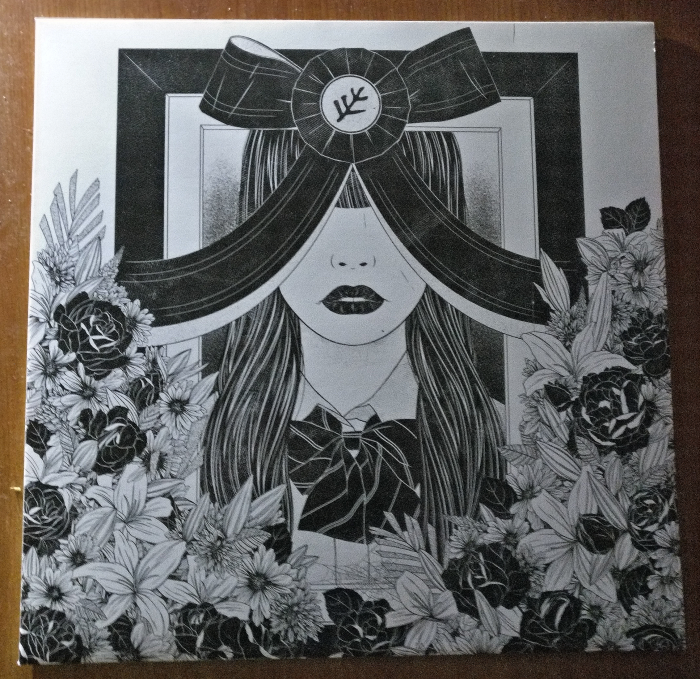 First up we have the beautiful jacket cover, which was designed by French artist Pierre Weird. It features a portrait of a deceased Japanese schoolgirl surrounded by flowers, with the Lovecraftian Elder Sign that NECRONOMIDOL use as part of their branding adorning the ribbon attached to the photo frame. It’s perhaps not the direction most would think to go for a NECRONOMIDOL cover, but I think it fits well enough and it actually looks quite striking so it’s sure to catch peoples’ attentions if you have it out on display. 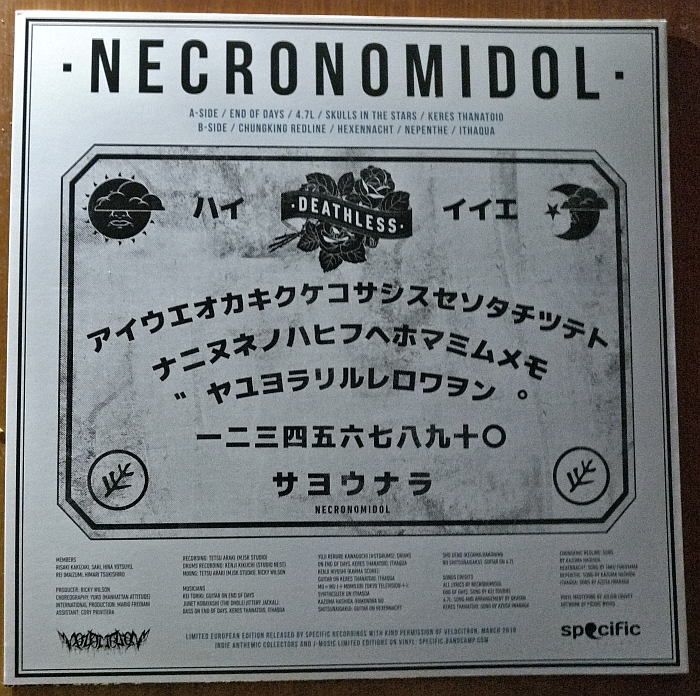 Then of course we have the back cover. You can see the tracklist, which is split over both sides of the vinyl which is nice. It also has all of the usual things you’d expect there to be on a back cover like credits and things of that nature. I guess the biggest talking point is the massive ouija board they’ve placed right in the middle there. I dig the design for sure but it’s not really something I’ve ever really associated with NECRONOMIDOL for some reason so it was a little odd to see, at least initially anyway. Though I suppose it does make sense that ouija boards would be a part of NECRONOMIDOL’s exploration of the dark arts so it’s not like it’s totally out of place or anything. 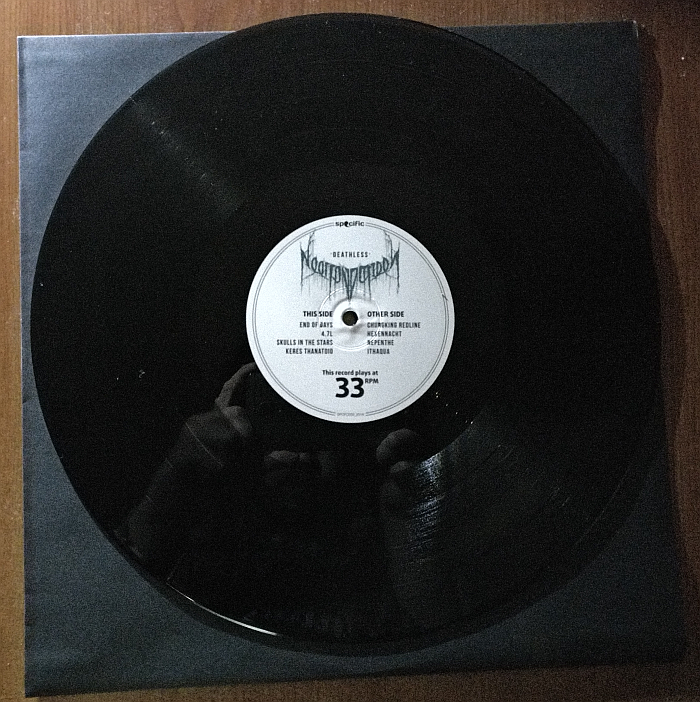 Then we get to the main event, the actual slab of vinyl. Specific sent me the “Risaki Black” version of the release but there is also a “Sari Green” version available, which I will be picking up at the earliest opportunity for obvious reasons. I think it’s pretty cool how they’ve worked in the ouija board planchette on one of the labels to really tie the whole thing together. The record itself is also produced to a high standard so those of you who are very picky when it comes to vinyl quality should be pretty content with this one, at least I was anyway. You can tell a lot of love went into this thing. 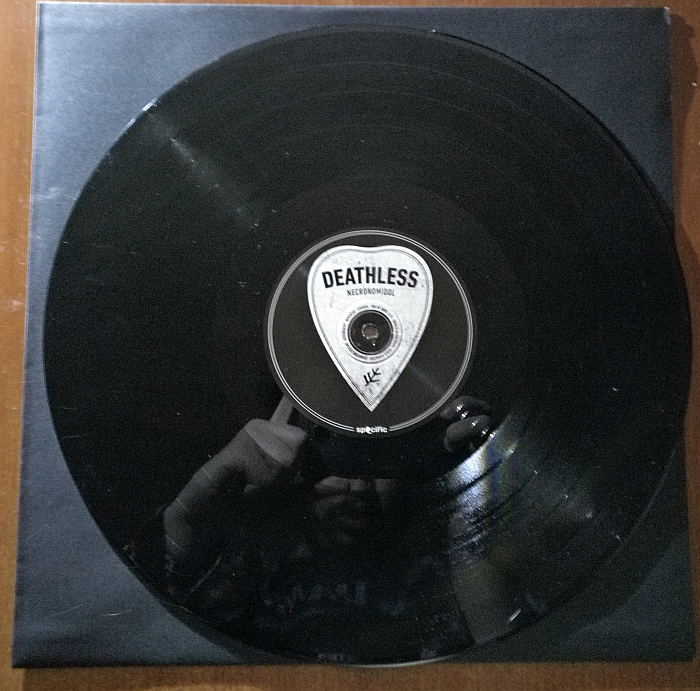 The Specific Recordings release of NECRONOMIDOL’s “DEATHLESS” goes up for pre-order December 1st through 10th, with an official release date of January 5th. It is offered in “Risaki Black” with a pressing of 200 copies, “Sari Green” also with a pressing of 200 copies and finally as a limited edition of 30 copies with a screenprinted ouija board. Be sure to head over to Specific Recordings’ Bandcamp from December 1st to pick up your copy. Don’t forget to tell them I sent you either!