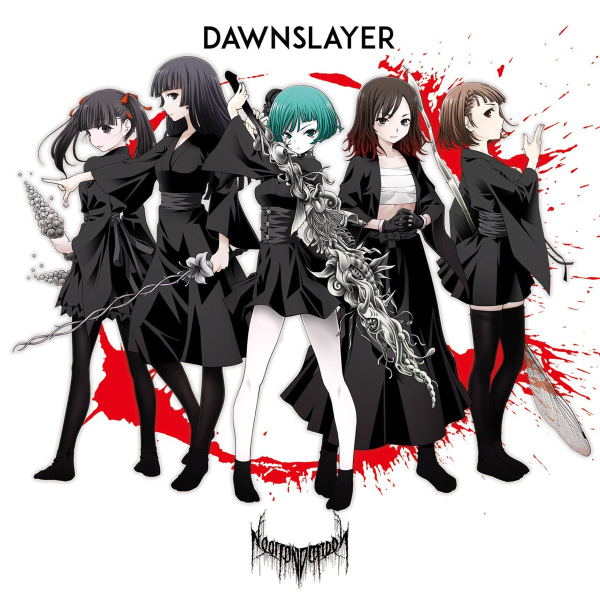 My thoughts on the latest single from NECRONOMIDOL.

So I’m not really sure how interested anyone is going to be in this review, seeing as you’ve all probably read several of them when this particular release dropped a couple of weeks back. Well, your boy had to wait for his CDs to show up in the mail so I couldn’t join in on the fun with everyone else who got an early look. It’s all good though, I had a bunch of other stuff I needed to get out of the way first anyway so whatever. Not really sure why I’m including this at the start here but I figured I should probably give those of you who actually read this a heads up or something I guess?

So anyway, did I mention that I love me some NECRONOMIDOL? They’re pretty unique in the Idol world because there’s not that many groups out there doing their particular blend of Darkwave and various genres of Metal music. They also get bonus points from me because they actually came over and did a tour of Europe in the summer instead of just hitting up the convention circuit on the west coast of North America like so many other groups seem to do. I suppose you could say that it’s not just their music that’s…unconventional. Okay, that was a terrible joke and even I feel bad about it.

NECRONOMIDOL return with their new single “DAWNSLAYER”. This comes almost exactly 6 months after the release of their second studio album “DEATHLESS” (review here). It comes in two versions, each with a different fourth track for a total of 5 new songs. I really liked “DEATHLESS” as an album and I thought it showed a lot of growth from the group, both in terms of song writing and production quality. I’m expecting “DAWNSLAYER” to continue this trend and I’ve gone out of my way to read as little about it as possible so I’m coming into this review almost completely blind. Let’s get into it, shall we?

The single’s title track “DAWNSLAYER” opens proceedings with raw power and aggression. Double kick drums and heavy guitar riffs are the order of the day on this track and if NECRONOMIDOL were looking to make a statement, I could think of worse techniques to use. The song does have a rather Power Metal feel to it at times, which I personally don’t mind because they’re not super in your face about it. Naturally there is also some synthesizer elements in play but they by no means dominate the track. Vocally, it’s pretty much what we’ve come to expect at this point. The signature spooky sounding, atmospheric vocal delivery but with just a little bit more polish. An incredibly solid a-side.

Moving on to our first b-side and we have “STARRY WISDOM”. You know how I said the synths weren’t that prominent on “DAWNSLAYER”? Well, they’ve definitely made up for it here. I’m a fan of the Darkwave genre of music and I think NECRONOMIDOL have a pretty interesting take on it as we see here. The instrumental wouldn’t be out of place in most nightclubs and honestly the vocals wouldn’t either. The dark and creepy factor has been turned down quite a bit, in favor of something a bit more palatable to your everyday music fan. By NECRONOMIDOL standards, this song has quite a bit of mainstream appeal I think.

It’s hard to put into words just how…dense “R’LYEH” feels when you’re listening to it. This is achieved partly due to the very well crafted synthesizer element of the composition and in another part thanks to the relentless and almost suffocating feel of the drumming. The vocal performance on this track is also very impressive and plays a huge part in creating the overall uneasy feeling that accompanies this song. I don’t think it can be stated strongly enough just how well put together this track is. I also doubt you could name any other Idol group that is on a similar level when it comes to creating such vivid atmospheres with their music.

No we come to “celephaïs”, the first of the version specific b-sides and from the “DAWN” version of “DAWNSLAYER”. It’s the title of a H. P. Lovecraft novel so that theme is still alive, as if “R’LYEH” didn’t make that obvious enough. This song is a very dark and brooding ballad, with a lot of bells, string instruments and other instruments of a “Classical” nature. The vocals on this song somehow sound even more ethereal than they usually do which I didn’t think was possible. I’m probably beginning to sounds like a broken record here, but it’s hard not to be incredibly impressed with how well this song manages to craft its gloomy, melancholic atmosphere. This is one that everyone should experience at least once.

The second of the “DAWNSLAYER” version specific b-sides is “ABHOTH” and as you might have already guessed, it features on the “SLAYER” version of the single. Once again, “ABHOTH” is a Lovecraftian entity so even more themed references on the go. There’s a saying about “Going out with a bang” and that’s certainly what NECRONOMIDOL are doing here. It’s hard not to draw the obvious comparison to Motorhead with this song because it’s very much in that style. It’s loud, it’s brash and it’s not here to mess around. The vocals are also a little bit harder on this one which was interesting to hear. Big guitar riffs, relentless guitars and NECRONOMIDOL on vocal duties. What’s not to like? 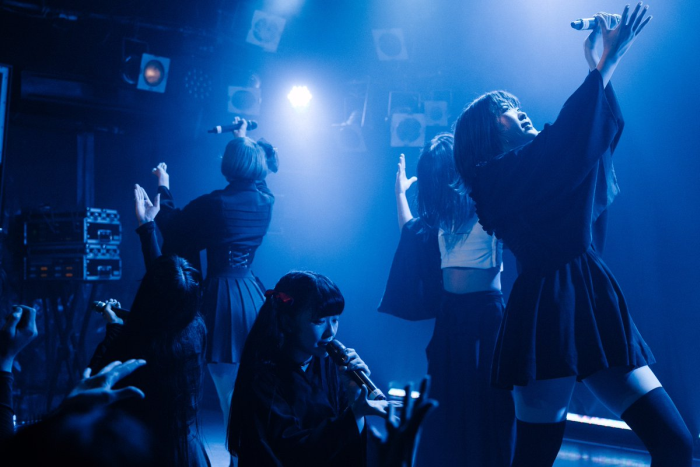 I get that you have to be of a certain musical inclination to fully appreciate NECRONOMIDOL but man if you are, they’re putting out some great stuff. Heck, “STARRY WISDOM” should even appeal to those who would normally turn their nose up at the notion of a *Blank* Metal/Darkwave Idol group. For me, “ABHOTH” is probably my favorite song but I like all of them for a whole host of reasons. Go check them all out on NECRONOMIDOL’s Bandcamp page, it’s free!

NECRONOMIDOL have had a pretty damn good 2017, what with the tour of Europe, releasing their second studio album “DEATHLESS” and now this mighty fine single in the form of “DAWNSLAYER”. I’m not even going to hope for more before we reach 2018 at this point but when the next NECRONOMIDOL release comes around, it’s going to have some tough acts to follow, that’s for sure.

Also check out the interview that Straight From Japan did with Richard Wilson, the man behind NECRONOMIDOL.