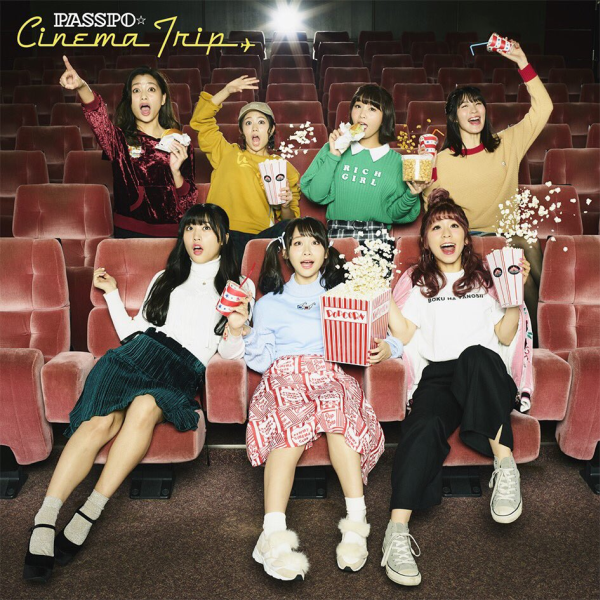 My thoughts on yet another album release from PASSPO☆.

“Oh no, not another PASSPO album!” is something that I think anyone could be forgiven for thinking when this release first got announced. It’s a bit of a running joke that PASSPO have released a lot of albums in the past 5 years, perhaps as many as they’ve released singles but I don’t have the figures on hand right now. If all of said albums were like “Beef or Chicken” or “JEJEJEJET!!” then great, but 5 count them 5 “Best Of” albums in 5 years is probably pushing your luck a little. I guess Universal sort of gave up on finding new ways to make money towards the end there.

That’s all in the past though, with 2016 seeing PASSPO have one of their best years in a long time. 3 singles and the new record deal with Crown Records definitely played a major part in that and PASSPO certainly seem to be back with a vengeance. 2016 also saw the group start to incorporate full band performances into their sets after flirting with the idea for the past few years since “Perfect Sky” came out. Its certainly given the group an interesting new dynamic that goes some way to making them stand out more in a now incredibly overcrowded marketplace. All in all, things look to be going really well for the group currently.

“Cinema Trip” is PASSPO’s first album under Crown Records and thankfully it’s not a “Best Of” and actually features a pretty good ratio of new to “old” material. Of course all of the group’s singles since signing with Crown are on here, as are their b-sides but that still leaves over half of the album devoted to entirely new material. Long time PASSPO fans know that their album songs usually deliver in a big way, so I’m coming in with fairly high expectations on this one. 2016 was something of a renaissance for the group, now let’s see if they can continue that momentum into 2017.

The album opens with “Popcorn bought?”, which isn’t really a song but more of an intro voiceover/instrumental. I guess this is probably what they’ll play before PASSPO live shows or something. There’s not much to say really, the instrumental is pretty great with a Punk Rock feel to it that I hope is a sign of things to come. That’s all I’ve got folks.

Okay so I’m feeling suitably warmed up after that, let’s see how the album’s first proper track “Music Navigation” plays out. It’s a pretty high energy Rock song, in the typical style that PASSPO have become known for over the years. The vocal delivery provides much of the personality of the song, with the instrumental being a fairly standard Rock arrangement albeit with a pretty cool guitar solo. For me, the chorus is probably the highlight of the whole thing although PASSPO have had better hooks. On the whole it’s an alright opening song, although I bet it’s probably 10 times better live.

Up next is “7’s Up” which featured as the b-side on PASSPO’s “Bachelorette wa Owaranai” single. You can check out a review of that by heading over here, but apparently this is a different version maybe? That’s what it’s listed as at least. Well, I listened to both version to see how they compared and I have to say…there isn’t that much of a difference. I mean, maybe my hearing is just shot from years of going to shows but the songs sound pretty much the same to me. I think they might have changed a lyric here or there but apart from that it’s the same great song as the original.

We’re back to new material for the next track. “PlayGround” is the promotional song for this album and chances are you’ve seen the totally unrealistic music video for it where zombie loving Masui Mio spends most of her time fleeing in terror from zombified PASSPO members. Anyway, if you liked the song “WING” that PASSPO put out getting on for 5 years ago now then I think you’ll enjoy this song a whole lot too. The vocals, especially the chorus are super catchy in a way that PASSPO excel at. It also has that foot stomping Rock instrumental that also manages to feel dramatic at the same time. Just a great song over all.

“Mr.Wednesday” follows on from that little number. PASSPO’s first single released under their new record label at the start of last year, you can check out my full review of it here. In my mind this was and still is one of, if not the best song that PASSPO have released in years and it really marked the start of the group’s revival. If you want a song that’s packed to the gills with hooks (wasn’t even going for some kind of weird fishing reference there) then you don’t have to look any further than this one. It’s just absolutely fantastic and is constantly in my song rotation while I’m working.

We go back to back on the previously released material with “Love Refrain” which was PASSPO’s most recent single before this album came out. Of course I reviewed it when it came out so if you want slightly more expanded thoughts then feel free to check that out. For me I would have relegated the other song (“Gimmie Gimmie Action”) that “Love Refrain” shares an a-side with to b-side status and let this super catchy song with a killer chorus take center stage. That’s not even getting into the great solo vocal parts that feature heavily throughout the song. PASSPO really proved that they’re the complete package with this one.

“NASA! ~Nande Aitsu Sukinanda, Aa~” sees us get back to the new material, and what a mouthful of a song title that is ladies and gentlemen. If you put NASA in a song title I’m automatically thinking of space and things of that nature. The song isn’t quite as blatant, there’s no crazy Space Rock stuff going on but it does have a kind of Sci-Fi feel to it. PASSPO don’t tend to mess around with synthesizers and vocal processing so it’s somewhat notable that those things make an appearance here albeit slight. This is a pretty epic sounding song that feels like it could be the theme for a crazy superhero show or something along those lines.

More new songs follow, first with “Fukutsu no Resistance” which is basically to persistently resist something I guess. Once again we’re off on an adventure into the realm of Hard Rock, with some loud and in your face guitars. The vocals are delivered quite dramatically and almost verging on the point of turning the song into a Rock Ballad of sorts. The chorus has a Stadium Rock kind of feel to it and the guitar playing is pretty top notch. Unfortunately, this isn’t really the most memorable song outside of those two things. It’s decent, but PASSPO have you spoilt for choice if all you’re looking for is decent.

The run of new songs continues with “WEEKDAY QUEENS”, which I’m assuming is kind of like a “Weekend Warrior” or something? I dunno, it’s a cute title for a song I guess. The song is also pretty heavy on the cute, almost to the point of being sickeningly cute at times. If you get past that though, you have a pretty fun Pop Punk style song going on here. The chorus has the kind of infectious hooks in it that while maybe not the most apparent at first, will definitely have you humming along in no time at all. This is a lot more playful than we usually hear out of PASSPO, but I wouldn’t mind hearing some more every so often.

The new material keeps coming, with “Minority Hero” coming next on the running order. Interesting title given current societal issues…yeah, let’s just leave that thought hanging there. Man, this song is pretty loud, abrasive and in your face isn’t it? Definitely nowhere near as fun as the previous song. This aggressive Rock instrumental they’ve got going on here is sort of growing on me though. The vocals are very powerful and have a serious tone to them, something that PASSPO tends to do quite well. On the whole though, this song is alright but it’s not really drawing me back in for more. Not bad though.

That nice little streak of new material is broken by “Gimme Gimme Action”, which as I mentioned before shared some a-side billing with “Love Refrain” a few months back. Once again, my full review can be read over here. To be clear, I don’t think it’s a bad song in the slightest. It just suffers from having a bunch of Christmas vibes associated with it, which is going to hold it back a bit. That aside, it has a pretty decent chorus and it is pretty clever how PASSPO have altered a Christmas classic into something of their own. Not their best work but it’s still a fine song.

“Film” is the album’s penultimate song, and also the last instance of new material that we’re treated to. Not the most inventive name but it fits the theme I suppose. This one opens up just about as ballad sounding as they come, and with an opening instrumental that wouldn’t sound out of place on a Coheed and Cambria album. That changes rather abruptly however, with a sharp uptick in tempo of the instrumental and vigor behind the vocal delivery. It feels like a boring comparison to make at this point, but SCANDAL from back in the day could have rocked this kind of song. This one is up there for me if we’re talking about best songs from this album.

The album is rounded out by “Bachelorette wa Owaranai”, PASSPO’s second single from last year. Full thoughts are available as always should you wish to check them out. I’d say this is my least favorite PASSPO single from last year, but competition was super fierce on that front. For me, I could have done with a little more out of the chorus or some kind of extra hook worked in somewhere. That’s a pretty minor complaint and honestly, I’m probably just nitpicking so I have something to talk about. “Yup, PASSPO killed it again” isn’t really much of a review, is it? Even if it’s true.

You know, now that I think about it we did sort of go on a trip to the cinema with this album didn’t we? All the typical movie themes are there, right? That’s a kinda funny thing to think about. Anyway, PASSPO are sort of like Juggernaut from the Marvel comics universe right now. They’ve picked up momentum and it’s honestly pretty difficult to see anyone stopping them any time soon. This album has a bit of everything and you should probably check it out if you haven’t already for some reason.

PASSPO have a ton of pretty big shows lined up for 2017. I believe there’s a Zepp tour happening at some point later in the year and whole bunch of other cool stuff I’m forgetting right now. Hopefully they also manage to squeeze a single or two in as well during that time because if this is where their music is at right now then I definitely want to have even more of it piped directly into my earholes.