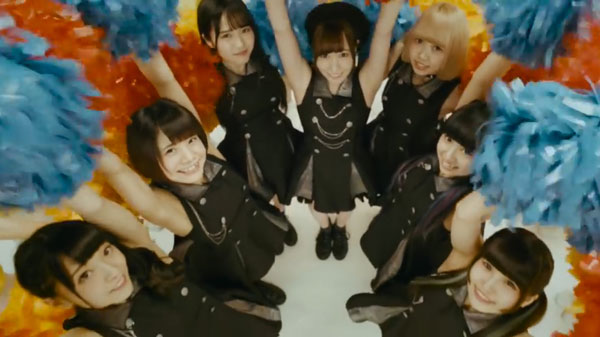 My working knowledge of MAPLEZ consists of the facts that they’re a Hiroshima-based idol group, and that Yano Miyuu is a super cute girl. Beyond that I don’t know much. They seem to be on the lower end of popularity going by their amount of Twitter followers. I don’t know if I’ve ever seen more than one or two fans in the west say much about them. In any case, they’re a pretty fun group and their latest release has a pretty decent video and an awesomely fuzzy song.

In the few years I’ve loosely followed MAPLEZ, I’ve never known them to have much of a budget for their PVs. This one totally lives up to that trend. Set pieces and decorations are borderline nonexistent. This is pretty common for their videos unfortunately. Aside from their name on the wall in cheesy old school decor, it’s literally a white background. There is a small platform that the girls are on while backup dancers give the video a little more life from below. It’s a plus, mostly because that and the logo are the only things going on with the dance shot set piece. The outfits look nice but are pretty quaint, being generic one piece dresses that are black and gray.

Breaking the monotony are a selection of solo and smaller group shots. Most are filmed outdoors in unremarkable but adequate settings. It’s a good break from the white walls at least. Clothes here are a little more stylish and civilian in nature. What really makes the scenery nice is the editing done to the video. The entire thing is given a kind of retro look with digitally aged colors like you might find in an unrestored tape reel from the 80’s. It’s a good visual element that plays into the song very well.

Choreography for this video makes generous use of pom poms, and they do a decent enough job with them to make you forget about the pretty average dance going on behind them. Despite that the PV has good eye candy in the members. Miyu bias aside (good lord is she pretty), this group is pretty good looking in general. It’s hard to not notice in my opinion anyway. Camera work is decent but there’s a few shots where backup dancers’ pom poms and heads obstruct the member shots. I find it to be very sloppy looking. Don’t get between me and my Myon, bro. Um, anyway, overall this PV is average but pleasant. It gets the job done, and the visual theme ties into the song so well that it negates some of the shortcomings.

Oh, and the ending scene with Koizumi Akane getting a pan dropped on her head is pretty great. I’m sorry, but I love that gag. Gets me every time.

The song holds its own easily. The instrumentals to this one are pretty wonderful. Composition-wise they’re pretty by the book for electro-pop, but stylistically I love them. The mix of fuzzy sounding synthesized audio is really well done and feels very inspired by music made with a MOS Technology 6502 processor. I’ve probably alienated all of you with that reference, huh? Basically the 6502 was widely used in the late 70’s to early 80’s in electronics like the original Nintendo, Atari 2600, Commodore PET, and so on. I guess I could have just said it sounds retro, but I wanted to impress you with some knowledge bombs. Did it work?

Anyway, the instrumentals sound so Commodore to me and I love them. The vocals are also pretty nice with a decent amount of solo vocal time for the members. All in all it’s a very fun, memorable, retro song that can get stuck in your head pretty easily. Very fun release. I wish they would/could make higher quality videos, but at least they’re consistent I guess.

Buy on CDJapan: Type A [CD+DVD] | Type B [Regular Edition]