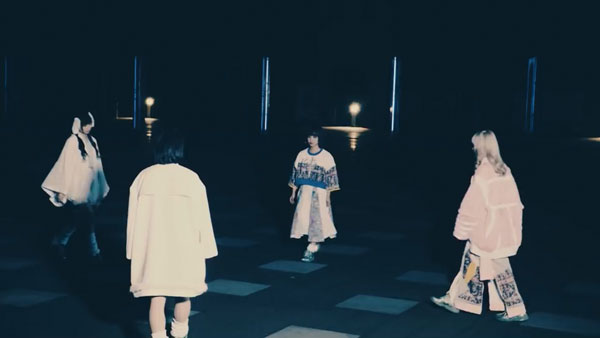 Alternative idol groups are becoming so common I don’t really know that they really classify as “alternative” anymore. Darker imagery and rougher songs are definitely more commonplace than a year or two prior. Among this burgeoning crowd is a new group called uijin. Their debut video may not possess an overwhelming wow factor, but it’s a worthwhile watch and the song packs a nice punch while being approachable to those in the general pop crowd.

This video has the typical imagery you might expect from an atypical idol group, but in moderation. No one’s bleeding in this one, but there’s no rainbows in sight either. The backdrops and sets tend to be on the literal dark side, with a slab of color filter for added effect. The darkness makes it hard to tell where we are most of the time, but here and there I see hints of a random alley, train platform, and most noticeably a giant lit up ferris wheel. None of these backdrops really add up to much. Between nightfall and stylistic blurring, it’s mostly a blob of lights at best. The indoor shots are pretty uninteresting, so maybe darkness works to this PV’s favor.

The scenery is enhanced with some random effects and CGI. Shots will occasionally split into two in a kaleidoscope style. Sometimes they’ll be given a corruption-like overlay. This is often used to transition scenes and it looks nicely done. At other times there might be random shapes and laser-like transitions. It’s decently done. Probably the most memorable scene is the girls taking bong hits presented through four retro-looking screens. Maybe we just found an unexplored genre: stoner idol group. Excuse me while I head to the copyright and patent office.

By default, the girls end up being the eye candy of the video. They’re a cute bunch, even if their outfits do little to impress. The girls are wearing very pajama-like outfits. Most of them are fluffy and lose-fitting. Only one girl is wearing something of more substance, but it’s still just a t-shirt. Luckily they’re well made up and the hair styles are nice.

This PV’s awesomely average, but something about it draws you in. The presentation somehow feels good despite the cheap production. I can’t tell you what it is. Camera work is average, there’s no real choreography, the assembly of scenes is just okay, but somehow it still comes off as likable. Good on them, I guess.

The song is in better territory. It has a nice dosage of alt idol to it, but it’s still very kin to more general J-Pop. I think pop-rock describes this well. The instrumentals are ripe with guitars and synthesizers that make for an interesting, pleasant mix. The vocals may not excessively shine, but I wouldn’t call them bad. Much like the video, it all comes together. Somehow.

Uijin currently has no scheduled release for this song, but you can listen to three songs for free on their website.