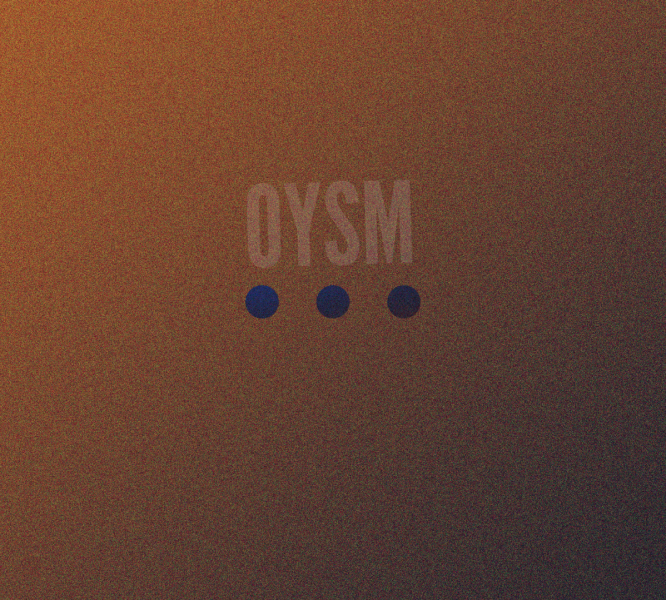 My thoughts on the 3rd album from Oyasumi Hologram.

So I guess the new trend with J-Pop artists is to release multiple albums in a 12 month period. I’m being slightly facetious when I say that, but there has been more than a couple of groups that have done it this year so who knows. In all honesty, I’d much prefer that approach instead of the double and triple a-side nonsense that we’ve been seeing these past few years, which pretty much turn most singles into EPs or even mini-albums if that’s your preferred naming convention. I guess you probably aren’t making as much money with that approach though, and we all know that the music business is about money before anything else.

That’s all besides the point though, although maybe it is something that could be looked at a bit more in-depth in its own article if I can ever conquer this ever growing backlog of reviews. That’s what I’m trying to do once again this week with a review of Oyasumi Hologram’s third album, which is simply titled “3” because that’s what it is right? As I alluded to in my slightly off-topic opening paragraph, this is Oyasumi Hologram’s second album offering of 2016 although I guess both were in the 7 song range so if it’s not like they cranked out 25 songs in 12 months or whatever.

You can check out my review of their previous album, which much like this one was simply titled “2” by clicking on this link right here. I like Oyasumi Hologram a whole lot, and I felt that “2” was an excellent album and reviewed it as such. I do however realize that they’re perhaps not everyone’s cup of tea. Oyasumi Hologram’s vocals are a little rough around the edges for example, people like me find that it adds character to their recordings but to others this is a huge deal breaker because I guess they’re used to everything sounding pitch perfect. With that in mind, let’s get into this review. 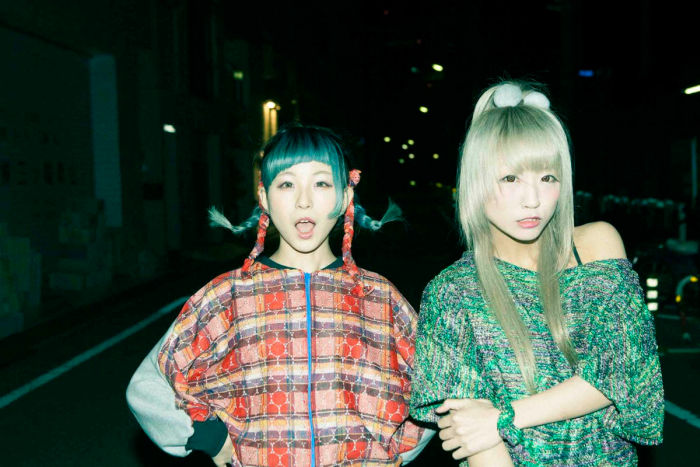 The album opens with a fairytale, well it’s a song called “fairytale” at least. Actually, “fairytale” is a pretty appropriate title for this song, it feels pretty…is “dreamy” the right word? I don’t know, those of you familiar with past Oyasumi Hologram works will get what I’m trying and failing to say here. Anyway, this is a slower song but I don’t really mind that when it comes to this duo. The instrumental does tease kicking it up a notch at times but it doesn’t ever really take the plunge. The vocal work is as great as it always is (if this style is your thing) and I have to say, this album is off to a good start.

“Mahiru no Dance”, or “Midday Dance” (that’s right, right?) is up next. I prefer to do my dancing at night personally (yeah right, I don’t dance), but that’s besides the point. I really enjoyed the instrumental on this song, it’s just so smooth and pleasant sounding to the ears. There’s so many layers to it too, but you can still really hear each individual component without it sounding too cluttered. I have to admit, the vocals aren’t the most interesting listen ever. They’re not bad or anything, and Hachigatsu and Kanami continue to compliment each other’s vocals nicely, it’s just not the most memorable of songs. It could grow on me though, maybe. 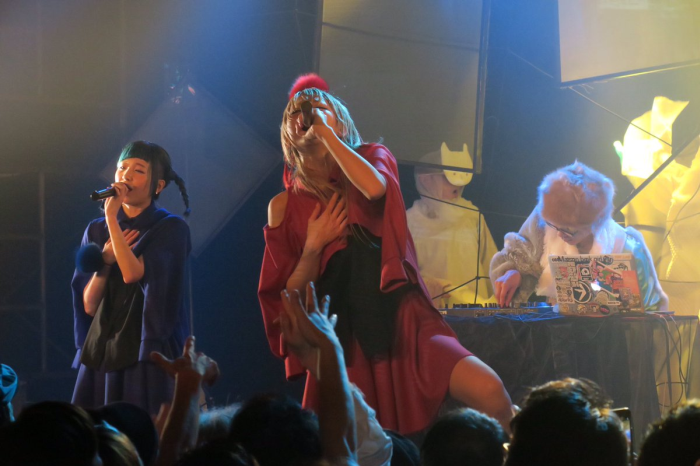 In the past few years I’ve really started to appreciate the piano more as an instrument. Well, “planet” has a pretty awesome piano solo as its lead-in so we’re already off to a good start in my book. Then all of a sudden we’re getting smacked upside the head with synthesizers and drum beats. So pretty much typical Oyasumi Hologram style then. Man, that one high pitch synth pattern is really catchy to my brain. The vocals on this song are a lot more interesting to me than the ones that featured on the previous song too. I guess it just sounds like there’s a bit more emotion in them or something, more like the Oyasumi Hologram I love. The best song on the album thus far.

Remember that one Rebecca Black song? Well, I’m happy to report that “friday” by Oyasumi Hologram isn’t a cover of that particular viral hit. Man, that would be pretty interesting to hear now that I think about it. Anyway, this song has a pretty trippy sounding instrumental backing it, I’m not really even sure how to describe it. Synthesized whistling I guess? Go grab the album from OTOTOY/one of this site’s affiliates and check it out. This song is pretty typical of the Oyasumi Hologram style in that the vocals are what you’ve come to expect but the instrumental kind of goes off in its own direction to provide much of the flair. I like it!

The album’s 5th track is a bit odd in that it’s a totally instrumental interlude. Remember back in the late 90s and early 00s when pretty much every album coming out just had an interlude on it because it was the done thing? This is kind of like that I guess, the music is pretty good though and has a sort of outer space vibe to it. I just wish Hachigatsu and Kanami were singing over it is all. 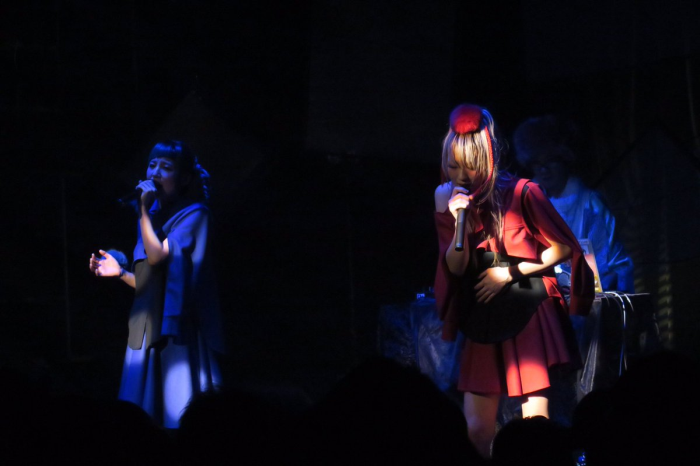 When I see see a song title like “sea song”, I’m expecting it to have some kind of water vibe/theme/whatever. That sounds pretty reasonable to everyone, right? Well, this song does sort of give me those vibes. It’s mainly in the synths, which kind of give off that impression of being underwater, you’ll know what I mean if you hear it. Oyasumi Hologram are also probably singing about the sea too, but my Japanese as we all know is pretty terrible. This song is a slower one, I guess you could call it ballad if you like to use that label for such things. If all slow songs had these vocals though, I’d listen to them all day.

The album closes with “empty page”, which is how all of my reviews/blogs/etc start. In fact, it’s how everything starts but the important thing is what you end up filling the page with. Man, that sounded all profound and stuff. Well, Oyasumi Hologram have filled this particular blank page with the kind of song that they do best. It has a pretty weird…I think it’s someone playing the triangle for the instrumental or something, it’s pretty different though. The stars of the show here are, quite rightfully the vocals. A ton of passion, some great harmonies, it’s what Oyasumi Hologram has been built on and a very fitting way to end this album. 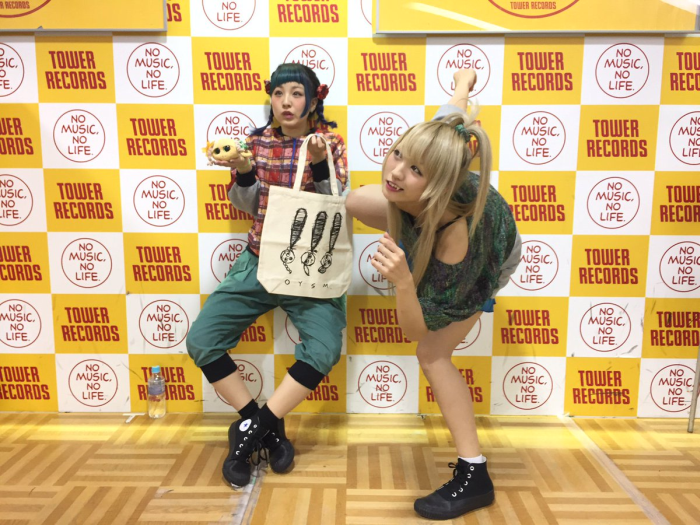 Okay, so this is a pretty great album. It’s not the best Oyasumi Hologram album in my opinion but that doesn’t really mean anything unless we’re only talking about Oyasumi Hologram albums and nothing else. “planet” and “empty page” are my personal picks for the best songs on this release but there aren’t really any weak ones, unless we’re actually counting the interlude as a song which would be pretty insane.

Like I said in the beginning of this article, Oyasumi Hologram aren’t going to be for everyone. They’re definitely for me though and I’m pretty happy that we got 2 albums out of them in 2016. I’m not sure what 2017 has in store for Hachigatsu and Kanami (probably another album, maybe a major label?, hopefully not a break-up) but I’m already looking forward to whatever it is they decide to do next.