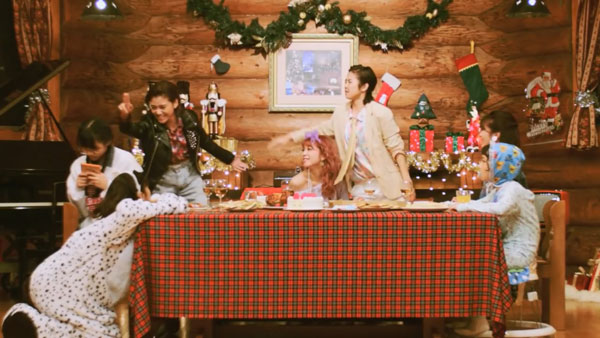 So it’s time for another PASSPO single, huh? It’s hard to readjust to them doing something more than a yearly album. Thank you Crown Records. This particular video plays up the scenario element, but unfortunately falls into pretty average territory despite some hilarious costumes.

The premise is pretty simple. The wild daughter Anna brings in her lover “Ryan” to a family dinner. Ryan, believe it or not, is actually a dansou’d up Anzai Naomi. She pulls off this look almost too well. Well, Ryanaomin seems to have a major problem with fidelity, and continues to hit on Anna’s nerdy, handheld game obsessed sister Negishi Ai. Passes are even made toward Yukimi-okaasan, who looks quite hot despite wearing the most epic pair of mom-pants I’ve ever seen. Papa Mori Shiori is annoyed as fuck at all of this, but seems mostly powerless to control the situation. Dog “Bacon”, portrayed by Iwamura Natsumi is down for whatever. Baby Masui Mio creeps me the fuck out.

It is amusing to watch Naomin’s womanizing and everyone’s reaction to it, but it doesn’t really lead to anything overly memorable. By the end everyone’s just pissed off. Well, until a PASSPO performance on TV saves the day. Suddenly everything is great! Man, they sure patched up this broken family faster than an episode of Full House. Sorry if that only makes sense to Americans and idols who are awesome enough to know of such things.

The presentation is nice enough. The outfits fulfill the roles in a humorous way and vary in awesomeness from parody-level funny to outright authentic. Are we sure that’s Naomin? The video has a nice selection of scenes and what little we see of the dance shot is nice too. Ultimately it just doesn’t reach a wild enough level for me to say it’s a great PV. It focuses so exclusively on the wild aspect, so they should have made it wilder I think.

The song however, I can offer pure praise for. I said it for the last two singles and I’ll say it again here. PASSPO is back, baby! It’s like they’ve reverted to their pre-Universal era and I absolutely love it. The pop-rock instrumentals are full of energy and guitar lines with a very upbeat tempo, and the vocals keep up the lively sound they’ve had for years. I’m really glad to see them making such enjoyable music again.