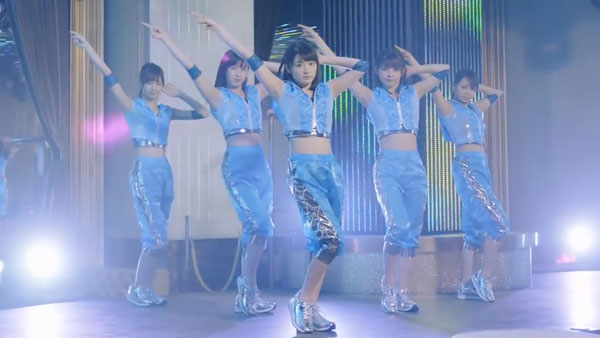 Juice=Juice was already off to a great start with their latest single. Amazingly, this next video totally blows the previous one I reviewed out of the water. Instead of the edginess we saw last time, this PV is all about good vibes, epic dancing, and one sassy upbeat song. I’ll be damned if it isn’t one of the most fun PVs of the year.

The PV is filmed on a small stage lit with various lasers and lighting patterns that have a hilarious retro feel to them. It’s delightfully cheesy and looks awesome. The lighting really makes the otherwise empty setting come to life in a big way. Almost paradoxically, the background effects are sane enough that they don’t distract from the members. There’s also some special effects here and there, and they too add a nice feel to the PV without getting in the way. The excellent camera work helps, too. Pretty much all of the PV is done in a group shot, but we get a satisfactory amount of member close-ups within them.

The choreography for the PV is nothing but fun. The dancing in this one is some of the most entertaining I’ve seen all year. It’s also pretty impressive technically. In line with the song, a lot of the moves borrow heavily from pop of years past. In particular a lot of it has a very Michael Jackson feel, complete with a lot of what I can only describe as crotch-centric moves. If there’s a better term for it, I don’t know it. Swagger maybe? More than anything, it’s all simply good fun. Timing and execution of each move are pretty exemplary. The girls definitely got their groove on when filming this one.

Beyond the technical impressiveness of the choreography, it’s just flat out damn fun to watch. The attitude of the video is so positive. Expressions are consistently great with lots of smiles, a few moments of the girls being silly, and even some alluring stares. It’s the complete package. A few random moments also add in some humor, such as the girls briefly borrowing Kobushi Factory’s ramen move. The scene that leads into the final chorus is also very noteworthy. The girls bring it down a notch and exchange glances down the line as each member struts their vocal stuff. It’s a really nice scene of comradery that’s often missed in idol groups. This PV is just so damn impressive in every aspect. It doesn’t miss a beat, metaphorically or literally.

The song itself is just as fun as the PV. As I mentioned above, it has a very Jackson-like feel to it, and the beat is very funky and practically made for getting down on the dance floor. The instrumentals are really fun to listen to and the quality of them is pretty good. The vocals are pretty typical Juice=Juice. Everyone gets a little solo time here and there, with Takagi Sayuki delivering the more impressive parts. Overall this song and video are amazingly fun. I’ve tried hard to not throw around the five star rating lately, but it’s more than deserved here. This is a huge PV of the year candidate.