Morning Musume being sexy? Modern day AKB48 impressing? Just in time for Halloween, PV Roundup is back in the idol twilight zone.

We’re going to have to double up a little here this week. There’s so many Up Front-related PVs coming out right now it’s insane. Luckily, one of Up Up Girls’ latest PVs should be easy to sum up.

With “Ran Ran Ran”, there’s quite a bit to talk about. This PV has a lot going on in the visuals department. For starters, the outfits. It’s hard not to get a little entranced when you see them. The members are wearing not quite skin tight, but tight enough leather outfits which happen to be conveniently zipped up to the bust line. I’m not going to mince words and will outright say that everyone looks fantastic if not downright hot.

While the sexiness factor is apparent, it’s not so overly done that it feels like they’re trying to sell the video or song with sex. It’s also interesting that despite the obvious visual appeal of Sengoku Minami and my personal bias toward Sekine Azusa, I actually think the girl who pulls off the outfit best is Arai Manami. With her tomboy-ish charms, it’s easy to forget she actually has quite the figure.

The second major motif in this video is a throwback to simpler times. The girls are seen listening to radios that probably use D-size batteries and shooting with cameras that don’t even have a USB port. Yup, we’re in retro waters! The video post-production also offers a slight worn film feel. It’s perfectly clear video, but it definitely has that retro camera tint to it. The setting is exclusively outdoors, and actually does a fantastic job of maintaining the retro feel by filming alongside older looking buildings. A car here and there might disrupt things if you’re looking really hard, but by and large everything feels very authentic.

Kind of rare for this group, there’s not much of any dancing in this PV. About the closest we get is some synchronized walking and pointing. Honestly, the rest of the PV is so nicely done I don’t really miss the dancing. The PV definitely has choreography with the intentional posing and synchronized actions, and it’s all very good stuff. Atmosphere is everything in this PV and the attention to detail pays off.

The song has a similar tone to some of their past EDM offerings. The tempo is slower and the instrumentals are a little more tame, but the feeling is there. As a fan of that flavor of their music I find it to be a very pleasing tune. The vocals aren’t the most memorable, even with a few solo lines, but they’re nice enough to listen to. This entire production is pretty damn good stuff. 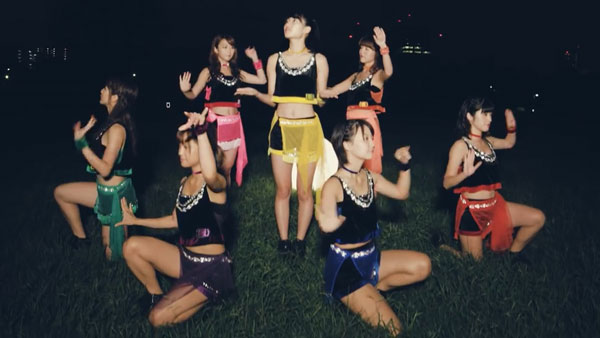 The last PV for this release from the Up Up Girls is a pretty simple one that mainly relies on live shots and a few singing scenes. The live footage is all pretty fun and well filmed. The original production for this makes use of some lighted orbs in the members’ colors, and it all looks nice. It’s not quite the amazing production of the other PVs, but it’s a nice enough add-in. My favorite thing about it is the black outfits with highlights in the members’ colors. They’re really lovely outfits with a decent helping of fan service.

The song’s pretty fun too. Not a single element of electro-pop in this one, but instead has a very homely feel. I don’t know if that makes any sense, but it almost has a slight country sound to it. The chorus line in this one is memorable and pleasant, and the tempo is light but still worthy of displaying an array of concert footage. It’s a nice one.