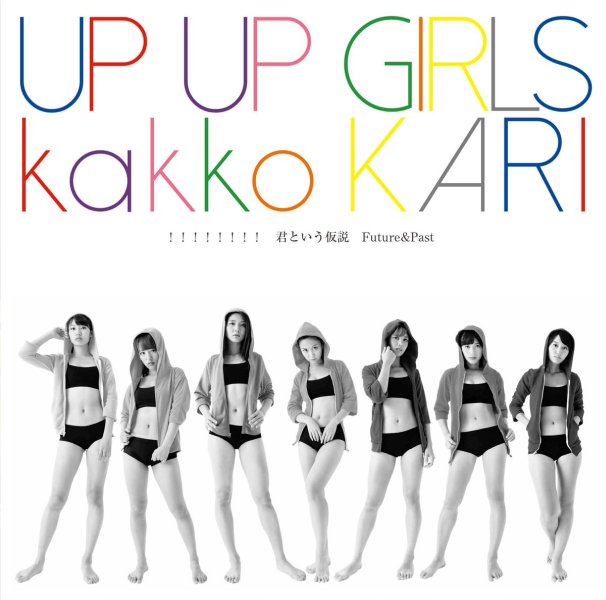 My thoughts on the 21st single from provisional idol group Up Up Girls.

Its been a minute since we’ve talked about Up Up Girls on this site hasn’t it? Their last single “Party People Alien / Seven☆Peace” came out back in April, and you can check out what my thoughts on that were by clicking here. It’s a pretty long review, so the short version is that I didn’t particularly enjoy “Party People Alien” all that much but I can still appreciate that it’s an appealing song to a lot of people. I thought the rest of the single was fantastic though, and would encourage you to go back and check out the b-sides, especially if you didn’t at the time.

Up Up Girls have taken it pretty easy on the releasing new music side of things this year, with this single being their second and likely last offering for the year. I guess two singles is perhaps marginally better than the solitary album release that made up their 2015 output, but as a fan I’m left wanting these past few years. Give me the goods T-Palette! Although I have to say, it is pretty cool that Up Up Girls are doing a Budokan show early next month. It’s just a shame that the dates didn’t line up, so I won’t actually be in the country when that’s going down.

Anyway, “!!!!!!!! / Kimi to Iu Kasetsu” marks Up Up Girls’ 21st single since their debut back in…2012? Man, has it really only been 4 years since Up Up Girls proper became a thing? Still, in those 4 years you’d think that they’d have dropped the “Kari” from the end of their name by now. I don’t think you can be “Provisional” after 4 years, 21 singles and 3 albums but that’s just me. I get that it’s the gimmick you nerds, so don’t go blowing me up in the comments or on Twitter. Anyway, let’s get on with this whole review deal that I’m supposed to be doing.

Let’s start off with “!!!!!!!!”, which we’re supposed to read as “Ban Ban Ban”. Aye, alright mate whatever you say. Questionable song titles aside, this song is a bit more mellow than Up Up Girls are typically known for. It’s certainly not as crazy as “Party People Alien”, that’s for sure. That said, it’s still pretty catchy which is something Up Up Girls are really good at, and the instrumentals are an interesting mix of Rock and synthesizer that works quite well. While this song wouldn’t rank in a fictional “Top 10 Up Up Girls songs” for most people, it’s another solid entry into their already rather large discography. Kinda surprising that Oomori Seiko had a hand in this honestly.

Up next is the second a-side “Kimi to Iu Kasetsu”, which I guess has a song title that you can actually read so that’s a positive right there. This song is another one that’s more on the mellow side, but the instrumentals have a great beat to them which is something I can get down with. Although, there is a part in there that kinda reminds me of that one Pitbull song with Ke$ha so that was a little bit weird. Basically all Up Up Girls have done here is give a Country song an EDM facelift. It probably shouldn’t work, and it probably sounds terrible when I write it out like that, but this song is actually pretty good.

That’s the a-sides out of the way, so let’s start on the b-sides. The first one on my list is called “YOLO” because I guess that’s still a thing. Hey, isn’t the new BAND-MAID single called “YOLO” too? What’s up with that? Again, this song is pretty different to what we typically hear from Up Up Girls. It’s pretty Rock oriented, with lots of guitars and actual real drum beats. We all know Up Up Girls can sing without…vocal enhancement, but I think it’s worth pointing out that their vocals on this song are really great. I think this song is my favorite so far, I like that we’re seeing some different things on this single.

“Future & Past” is slightly more typical of the style of music that Up Up Girls have been producing for the past couple of years. There’s lots of synth work on show in the instrumental, and I get the feeling that the main melody probably gets the room bouncing when it gets performed live, literally. There’s a bit more vocal modulation on this track, but it’s not over done to the point where it could be anyone singing, it’s still very distinctly an Up Up Girls song. I even don’t hate the Rap parts that were worked in at various points, they broke the song up quite nicely so I guess you can still use Rap effectively in Idol music in 2016.

Man, reviewing all these b-sides is starting to make this feel like an album review. Anyway, up next is “Ranranran” which is definitely a much more familiar Up Up Girls sound than we’ve heard up to this point. I’m somewhat reminded of an anime theme song while listening to this, which is either a good or bad thing depending on your views on such music. I’m also really enjoying the synths on this one, they do a lot to help the verses sound a bit more interesting than the vocals would otherwise. The chorus is great though, so if you’ve been liking recent Up Up Girls output then you’re probably going to like this song too.

The last song from this single that I’ll be talking about in this article is “Abyssal Drop”, which I believe is a song by the artist fu_mou, with Saho Akari on vocal duty as noted. It’s pretty much entirely reliant on synths, but for the most part they’re almost mellow or even sombre in a way. Akari’s low, softly sung vocals add to this overall feeling. This is a great example of how to pair vocals and instrumentals well, you just feel like the whole thing fits. I’d say this is right up there for consideration as one of the best songs from this single. Definitely check this one out.

There’s also two remixes available as part of this release, they’re of “Party People Alien” and “Barebare I LOVE YOU” and they’re pretty decent as far as remixes go I guess. I don’t really have too much to say about them because I’ve already talked about those songs before and I feel like I’d be retreading old ground for the most part. That’s probably unfair to the producers who put the time and effort in to create these tracks, but I don’t really know how to evaluate remixes in the first place so I’d rather leave that to people who know what they’re talking about.

So yeah, that was Up Up Girls’ latest single. There’s some really good songs on here which is great, and I think a lot of people will be able to find something they enjoy. It’ll be interesting to see what Up Up Girls do next, assuming they don’t announce that they’re disbanding at their Budokan show or something. I didn’t jinx it, did I?