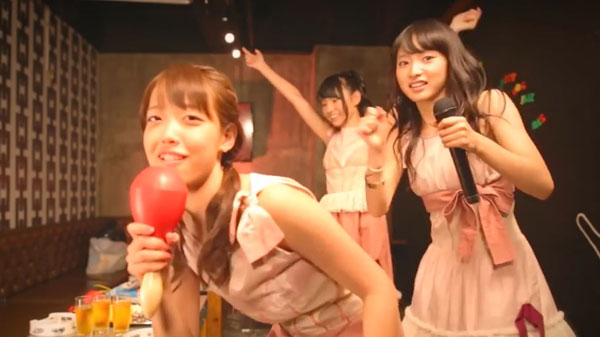 I’m not really qualified to tell you much about ANNA☆S as I haven’t had a ton of exposure to this group. What I can tell you is they’ve released a new PV to promote their new album which appears to be a “Best Of”. The song is actually the title track from a previous album, or so their discography leads me to believe. All I know is it was uploaded last week to their YouTube channel, so here it is. After a less than stellar encounter with Koike Anna’s solo gig, I’m happy to say this PV is much better. In fact, it’s downright fun.

This PV is a terrific example of doing it right with a seemingly limited budget. You’re not going to find a large studio, multiple set pieces, aftereffects or even much camera work in this video. It’s made with the very basic concept of girls having fun in a karaoke setting. That’s literally all there is to it. Everything takes place in a nice enough but slightly outdated looking karaoke room. The girls sing and dance along to their song in a very playful way. That’s literally all this video is.

The video may lack impressive visuals or stunning production, but it compensates for it by being so damn fun to watch. The antics in the karaoke room are an almost stereotypical Japanese girl level of silliness. You’ll constantly see the girls fighting for the mic, making use of a few karaoke room props like maracas, and striking goofy yet epic poses while they sing along to the song. It all adds up into this being an extremely fun video to watch. In this regard, it’s very impressive.

In between these wonderfully charismatic shots, there are a few scenes where the table is removed from the room and the girls do a dedicated dance shot. These scenes are done okay, but the dancing is fairly average and still not taken too seriously, so it doesn’t really feel all that different from what was already going on otherwise. For that reason I wish they would have just stayed with the main karaoke scenes. If I may be a backseat director for a second, I think this PV would have been even more epic if it were a one-shot video.

A minimal amount of scene changing benefits this video since the production value is so low. What little scene changing is there is honestly kinda bad. Sometimes there are cuts within the karaoke scenes and the resulting pop in the action on screen is very jarring. In better news, the one scene we’re treated to is well lit. There is some over-saturation when they’re closer to the camera, but it’s bearable. Most scenes look fine. The outfits for this one also look a little cheap, but they’re cute enough. The pink colors used on them are nice.

Despite all of this cheapness and some errors in the production, this PV is still great. The level of fun it exudes just overcomes any and all flaws. Its been quite a while since I’ve seen a PV be so fun yet so simple. Very nicely done.

The song itself is very enjoyable as well. It’s a very upbeat song and the perfect foundation for some karaoke fun. The arrangement is simple, has a nice tempo that’s easy to keep up with, and the vocals contain a few different styles that mesh well together. All in all it comes down to the fun once again. The video and audio deliver big time.

Buy on CDJapan: Type A | Type B