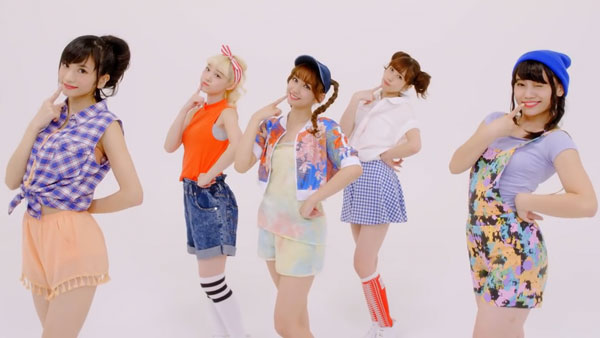 Doll Elements is a fun group that I keep meaning to check out a little more intently. They have some cool stuff in their back catalog. However, they’re not the most consistent in quality, as seen the last time they were included in a roundup. Luckily for this video, things are on the up and up.

The premise of this video is a simple one. Basically, oh shit, Koizumi Haruka ate too many eclairs and now she can’t fit into her skimpy shorts to go out. It’s clearly the end of the world as we know it. After this realization, her and the other girls occupy a lot of screen time with exercising. They also experience hilarious flashbacks of their transgressions of enjoying too many phallic-shaped delicacies. It’s a problem only an idol could have. I’m avoiding talking about this too much because nothing makes this fandom more triggered than idol weight issues, real or imagined. 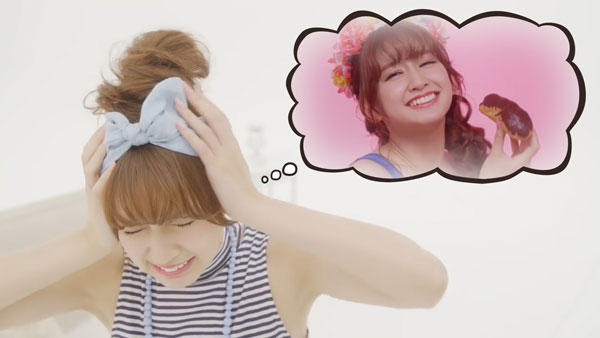 Luckily, all of these scenes are either really cute or just flat-out good eye candy. There’s no doubt this is a group of very nice looking girls, and the scenes of Haruka hanging out in her PJs are especially good fan service. The clothing the girls wear throughout the PV are really bright in color and very stylish. Everyone looks so nice in their civilian clothes I wish they hadn’t bothered with the seldom seen white and blue tops and dresses that serve as the group’s uniform.

It’s good that these interaction shots are so well assembled, because the rest of the PV is just along for the ride. The dance shot is satisfactory but fairly unmemorable, and while the scenes themselves are cute, the cuts and transitions are just a little lazy. There are some aftereffects and popups here and there. They’re decent quality but unobtrusive to the point you barely notice them. Probably the most standout effects are added bubbles of light in some solo shots. It looks okay. However, I can offer praise for the camera work and color editing in the PV. It’s 100% free of Japan filter, and all of the scenes are shot very well.

The song itself is a really pleasant but slightly predictable pop song. It doesn’t have as much kick as “Dear Future” had, but it’s nice enough to listen to regardless. The instrumentals are pretty by the book and sound like plenty of other songs out there. I really don’t know how to describe it other than that. Vocals however are quite pleasant. This group definitely has a unique, nice sound and it’s used well here. It’s a nice addition to their catalog, even if it might not be anything epic.